Well, sure enough, after the last Tales from School, I did think of more things that made me smile at school. Where to start?

How about the time I had the Burmese python visit my leadership class? We got to talking about things that some of the kids had never done, like fly in an airplane, ride a train, touch a snake. Touch a snake? I couldn’t believe some of them had never done that, since I had just about given my mother a coronary several times when I proudly showed her the hog-nose snakes I caught as a child. Kids are supposed to touch snakes, catch frogs, toads, raise tadpoles, stuff like that. So it was decided they should have the chance to get up close and personal with a snake. One of my former students just happened to have a six-foot python that he was willing to bring up for show and tell. So he did, and all the kids, no, most of the kids, were willing to at least offer the snake a fingertip to the back of the head. After they had their ah-ha moment and discovered he wasn’t cold, clammy, or wet, but smooth and agreeable, then they all wanted to pet him. Don’t ask me how we knew he was a he; that’s what we were told, and that was fine with us. Boy V, who was one of the shorter kids in class, was especially taken with the snake and before long had it draped around his neck and body and was quite enjoying being the brave one who would allow the snake to curl up around him  when Boy J, a much bigger, tougher-looking  kid, who had conveniently been called to the office at the start of class, reappeared, saw the snake curling around the other boy, and nearly broke his neck and the door jamb getting out of the room and into the hall to safety. We never did get him to touch that snake. And this was a nice, gentle, slow-moving snake. I wonder if Boy J has, to this day, ever done anything other than shoot snakes from a safe distance.

I remember with fondness the day that Boy M came into class, exasperated, waving his arms, shaking his head, and whining that the teachers were all picking on him. “What is it with you teachers? Do you just think up ways to pick on me every day?” He plopped down in his desk, resigned to the fact that the world was out to get him. Now, you have to know that this kid was pretty proud of himself and many times we teachers could have asked him the same question- did he stay up nights dreaming up ways to irritate us in class? So I said, quite seriously, “Why, yes, M, it’s in our contracts. We get together every morning and plan what we are going to do to you that day.” He gave me a funny look, got real quiet, and wasn’t sure if he should believe me or not. I rather enjoyed the moment.

This next story is not so much funny as it is a six degrees of Kevin Bacon kind of story. I have this friend from high school, Anne Marie, who used to call me on New Year’s Day, and we would catch up on each other’s lives. She hasn’t called lately, but on one of her calls, she couldn’t wait to tell me about her call from a telemarketer. She didn’t buy anything from him, never intended to, but she was willing to talk a while because she said they get paid more for longer calls. I don’t know if that is true, but it would be just like her to try to help someone out like that. Anyway, they are talking along and she asks him where he is located. Amarillo, he says, and she says oh, I have a friend who lives in Muleshoe, isn’t that close by? He says yes, and asks who the friend is. She says Alice Liles, do you know her? And he says yes, she was my English teacher! Turns out the student was Randy Bohler!  How small world syndrome is that! I  mean, really, what are the chances of a telemarketer  making the call to  someone who was willing to chat on the phone  and have  that information come out of the conversation?

I had one student who had the distinction of being my student for four years, once in 7th grade and three times in freshman English. He wasn’t stupid; on the contrary, he was plenty smart. School just wasn’t on his list of important things to do. He passed 7th grade in pretty good shape, but about the time I moved up to high school to teach freshman English, so did he.  Ninth grade was another matter.  He missed too many days, had a real aversion to doing his homework, and flunked freshman English.  Or maybe he just liked being in my class.  So for the next two years he took two English classes a year, freshman and sophomore English, then freshman and junior English, and he may have had to double up his senior year as well, but he earned his English credits, and  finally made it out of high school. But the story is that one day of that fourth year I had him,  I was called to the office. My room was close to the office then, and I wouldn’t have to be gone but a couple of minutes, and this was back when it was relatively safe to leave a roomful of kids for a few minutes, so I dashed out after telling them to sit tight and I would be right back. Which I was, but when I walked in, there was Boy L up at my lectern teaching the day’s lesson! And doing a pretty good job, I must say. I see him from time to time now and am pleased to  report he has matured  into a responsible  young man with a nice family and a good job as foreman in one of the area  industries. That’s one of the fun things about teaching high school; seeing how kids turn out. And they do actually grow up!

On the subject of having kids more than one year, when I moved up to high school I did have a bunch of kids several times, now that I think about it, but not because they kept flunking freshman English! I had some of them in G/T in junior high, 7th grade reading, freshman English, regular leadership, and it seems like one other subject-I forget. It’s been a while. I suspect that is more likely to happen in a smaller school like Muleshoe. I taught all the freshman English classes, so they had to come through my class for at least that one subject,  as they had to do for 7th grade reading. So we knew each other pretty well there for a while. In fact, that class  did me the honor of asking me to deliver their commencement address when they graduated, which also gave me the distinction of being the first female commencement speaker at a Muleshoe High School  graduation exercise. That would have been back in, oh, gosh, what year, the mid ‘90s? I will have to look it up and get back to you.

And my last story today is one I promised Riley Byers. For several years I taught a PAL (Peer Assistance and Leadership) class, not the same leadership class of the snake story. The PAL class was involved in a variety of things, but their focus was  mentoring  younger kids and also providing  academic and peer mediation help in high school. Riley was in that class. Every year the kids would  design the T-shirt they would wear on trips and various occasions in their capacity as PALs. That particular year we were arguing over the design, and Riley hastily drew something on a piece of paper and pitched it on my desk. We all looked at it; some of the kids giggled; Riley defended his design, and the more they thought about it, the more appropriate it seemed to be for what we were all about. Simple, to the point, hit the nail right on the head. As it happens, my T-shirt has an honored place on my T-shirt quilt, so  this is the one school story for which I have a picture to share with you. Neat, huh? 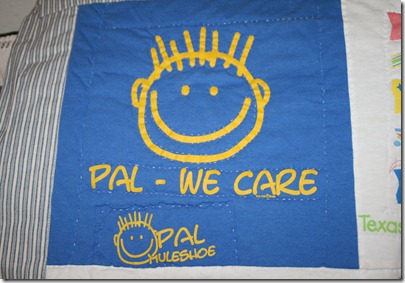 It wasn’t always sweetness and light, but kids have much to offer if we just listen and give them the chance to prove themselves.