Back in 1961, Inez Bobo, Marie Lenau, Arline Phelps, Matilda Slemmons, and Vere Fox embarked on a venture that gave birth to another one of Muleshoe’s claims to fame, the Art Loft. 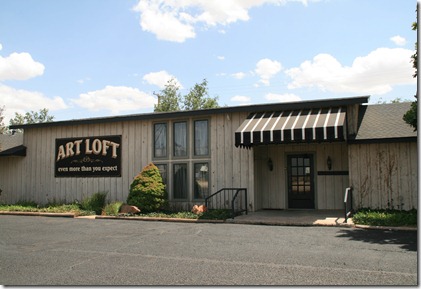 It all started when these five friends, neighbors, decided to take art lessons from Dr. Emilio Caballero, who at one time was the head of the art department at West Texas State University (now West Texas A&M University) in Canyon. As their passion for creating pieces of art grew, their need for a convenient place to paint and work, and eventually show their work and perhaps sell some of it, led them to the first version of the Art Loft, which was on the top floor of Sanders Lumber Yard. Sanders Lumber Yard was located in the now vacant lot next to Edward Jones and west of  where Muleshoe State Bank now stands.  Each of the women had a separate room to make  their own special place, which they did by decorating in their own distinctive and unique way. Since entrance to these rooms was gained by way of an outside stairway to the top floor, or loft, of the building, and since art is what would be found there, calling it the Art Loft seemed just right and appropriate.

And the name stuck, even as the establishment left the lumber yard location and as it grew from being just an art gallery to the unique store it became.   Art, Antiques, Furniture, and  Interior Design is how the business cards read as the scope of merchandise broadened to include all this and much more, as well as the very busy framing department. The store  made its way down American Boulevard (Highway 84)  to a building (which later housed Cliff Allen’s saddle shop)  across the street from present-day Leal’s, and later  to its final location farther down  the highway. At the time there were four “starter houses”  in a row at 1529 W.  American Boulevard. At one time and not necessarily in this order the John Purdy family,  Maureen and Robert Hooten, M.D. and Pearl Gunstream, Roy and Joy Whit,t and I am sure others, lived in those houses. I get tickled when I write these things about Muleshoe’s history; I always learn things I didn’t start out to write about, such as who lived in these houses that turn into the Art Loft. Interesting facts and little stories always have a way of coming out, and it is always fun to connect the dots.  But I digress.

So the five friends bought this string of houses as they became available,  gutted them, and had carpenters build sections of walls to connect them so that the building became one long structure. And to the first of the houses, the one on the west end, one important component was added-a staircase up to a small loft. After all, this was to be the Art Loft. 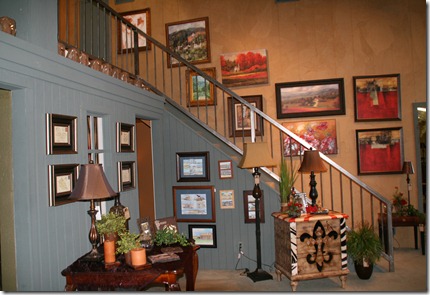 Through the years other changes came to the Art Loft. Vere Fox and Matilda Slemmons left the group early on  for various reasons.  The scope of the merchandise changed. The remaining partners each refined and developed their own styles and found their niche in the business. Marie Lenau  made the enamel on copper her signature pieces, but also painted watercolors in the Impressionist style. Marie was the next to leave, wanting to spend more time with her husband Charles. Arline Phelps was also a fan of Impressionism and painted acrylics and watercolors. She was the businesswoman of the trio; her focus was not to get rich, but to make  money to  put back in the business. Arline was probably the better known artist of the group, having shown her work in galleries in New Mexico as well. Inez Bobo,  who tended to paint in browns and related hues, was the social butterfly of the group. Her thing was visiting with the customers rather than selling them things. If Arline was the business heart of the place, Inez was the social soul. She would greet and visit with people during the work day and then at night, especially after Mr. Bobo died, would stay at the store, make a batch of microwave popcorn, and tend to the paperwork that needed to be done. Carefully crafted  handwritten greetings and notes would be interspersed with the items listed on the invoices she would prepare as she ate her popcorn and took care of business. In fact, her love of connecting with people moved with her after her departure from the Art Loft due to health reasons and her move to Lubbock to be near family. She subscribed to the Muleshoe Journal, and when someone’s accomplishments or life changes would make the paper, she would hand write chatty notes of congratulations and mail them to surprised and pleased recipients. I was one of those lucky people who was blessed with her graciousness and was always pleased when her notes came.

But back to the Art Loft. A cut-out of Uncle Sam has graced the front of the building for as long as I can remember. He was Inez’s idea for one Fourth of July celebration. Dale Hughes, whose talents and skill contributed much to the business through the years,  built it, first out of metal and then out of wood. Uncle Sam was a hit, so there he stayed. Now I think people might get lost looking for the Art Loft if he was not there to greet them. 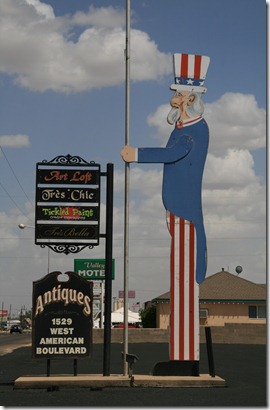 Another thing special to the Art Loft that I remember was their handmade  splatter-painted gift-wrapping paper.  Marilyn Riley, who worked there for 21  years with Sydna Flowers and Arline in the interior design department, laughed about what a pain it was to make. They would roll out brown paper on a wood floor in the back and proceed to splatter latex mixed with gesso and acrylic paint all over it and the floor, so that in the process they unwittingly created a distinctive splatter-painted floor that remained that way for many years.

Something else unique to the Art Loft at the time was when they came up with the Think Christmas week in October. They found the idea in a book and decided to try it.  They sent out invitations to customers, including ones  from out of town (as by this time they had a host of loyal repeat out-of-town customers),  hosted lunches in the beginning, and it was a success. Busloads of women from Lubbock and as far away as Waco came to shop. And to this day, the Think Christmas week in October continues.

In 1994 the Art Loft caught on fire. It didn’t burn down but did suffer quite a bit of damage, especially smoke damage to the merchandise. The decision was made not to close down but to hold a fire sale and start over. Loyal local customers volunteered to help, and it was quite an event. All the merchandise was spread out in the parking lot and people came to buy a piece of history at a bargain price. During the cleaning and rebuilding, the business was housed in what is now the Muleshoe ISD bus barn, which used to be the home of Robbie Green’s GMC dealership. (See, there’s another one of those local history connections!) They reopened in 1996. 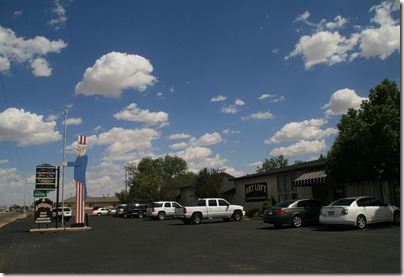 But then the Art Loft closed in 2000. Medical problems got in the way. Inez had fallen and never was able to go back to work. Arline battled cancer and even with Dale’s help, just couldn’t do the place justice and decided to sell. 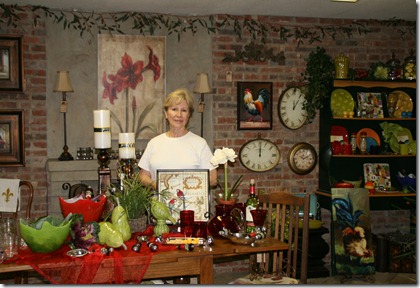 Arline and Inez sold the business to Sharon Agee in 2002 and the Art Loft was again up and running. The east end of the building now houses other businesses, but the Art Loft still remains. Sharon says that today the best part of owning the Art Loft is getting to meet people passing through town  who stop, many of them long-time customers, who will look around with fond memories and say things like “I bought one of these sand candles twenty years ago here, and I still use it.” Marie Lenau died in 2002, Arline Phelps in 2005, and Inez Bobo in 2006, but their legacy lives on every time people drop by and share memories about this place that has been a part of the Muleshoe landscape for so many years. The hollyhocks that used to bloom by the front door are no longer there, but the sign that Sharon Agee says symbolizes the three friends’ legacy still remains and will continue to greet visitors: 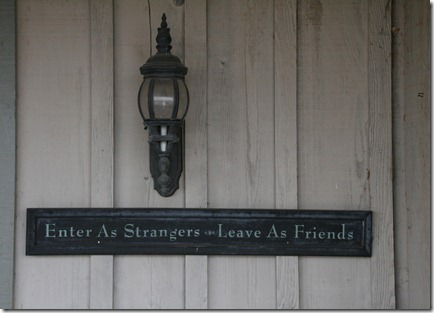 Enter As Strangers-Leave As Friends