In an earlier blog we talked about having three main topics in life (The Three Main Topics, April 7, 2010). Steve Friskup could tell you his three without missing a beat: roping, riding, and  religion, not necessarily in that order.  Well, family would sneak in there, too, because he would say there should be  four,  but Steve and his Cowboy Church in Muleshoe pull these three topics, and family as well,  together nicely with their Christian Roping Camp, which just finished its 11th year this past weekend. For Steve, the clinic is a labor of love and a direction from God. He can tell you the exact time when God started riding shotgun with him. “It was December 3rd, 1995, at one o’clock in the morning, on the first exit on I-40 at Elk City, Oklahoma, while I was driving my pick-up. I pulled over and said, “Lord, I need some help. And He did [help me].” Steve, who now works as a livestock auctioneer when he is not spreading God’s word at the Muleshoe Cowboy Fellowship, was then a cowboy and auctioneer who was adrift with no fulfillment. Even though he was a husband and father, he felt a desperate need to fill his otherwise empty existence with something that mattered. He knew there had to be more to life than always buying the first round at Happy Hour. That two-year period after Steve asked for God’s help was the hardest time  in his life- “It’s hard to put old wine in new skin,” he says. In 2002 Steve and his wife Robin were in Canyon  spreading the Good Word when he received a call from Gary Morris asking him to come to Muleshoe to help with a roping clinic and then give an inspirational message on Thursdays. Steve felt drawn to move to Muleshoe and make it permanent. When he told Robin that the Lord wanted them in Muleshoe, she hesitated a minute and said, “Well, go ask him again.” 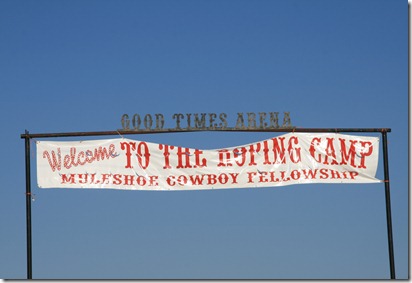 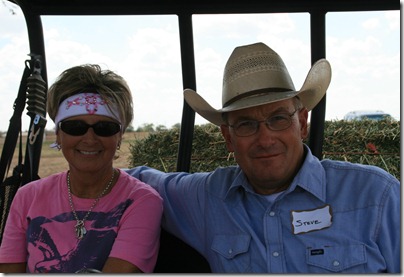 Robin and Steve Friskup. Steve asked again,  move they did, and now neither one of them can envision living anywhere else. In those nine years Steve has seen major growth in the Muleshoe Cowboy Fellowship congregation as well as the roping clinic held at the Good Times Roping Arena north of Muleshoe. When I asked about membership numbers, Steve just shook his head and said, “We don’t really have a membership list, but we probably have anywhere from 250-300 at services each week.” 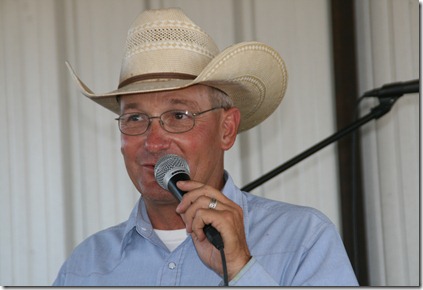 When I asked about participation in the camp this year, he said 125 campers signed up, but the count would be higher if everyone who came actually registered. People showed up from all from all over Texas, New Mexico, and Oklahoma.

This is the most important building, along with the arena, for the camp. Last year the kitchen, right, and dining area were added to the tabernacle, at the end. 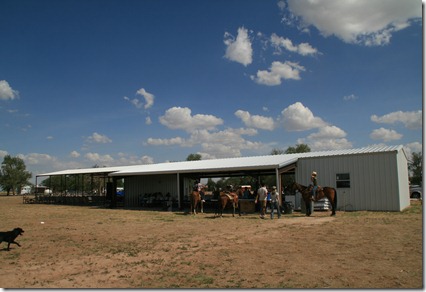 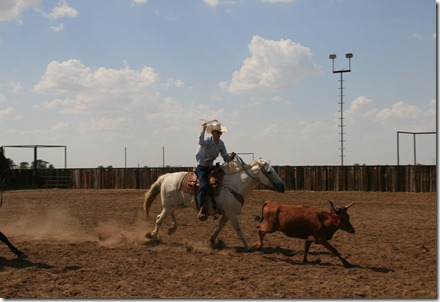 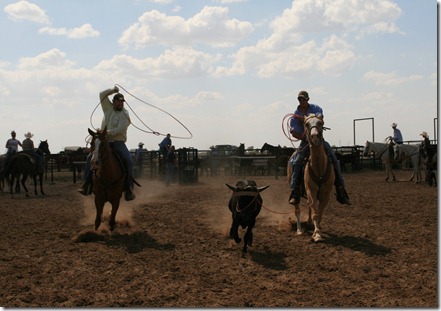 Roping practice goes on all day, along with devotionals, meals, and lots of fellowship.  Steve sees the roping clinic as the Muleshoe Cowboy Fellowship’s version of vacation Bible school for families as well as individuals and strives to incorporate the three main topics, with emphasis on the religion point. He has lots of good help from members of the Cowboy Fellowship congregation and others who share an interest in the same three main topics. No registration fee is required, but Steve says many people make donations that go to help with expenses of the camp.

This roping dummy didn’t stand a chance with all these future USTRA/PRCA  members ganging up on it. Riding and roping skills were taught and practiced through team roping, dummy roping, steer stopping, and the newest attraction-a goat roping pen.  The goats were added last year and have become a main attraction for the  kids, although adults have been seen taking their turns at capturing the little critters as well. 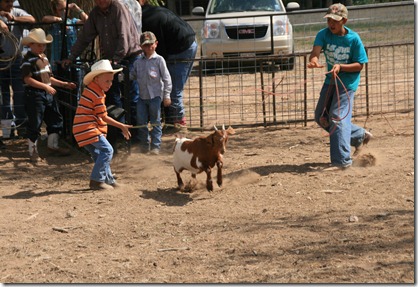 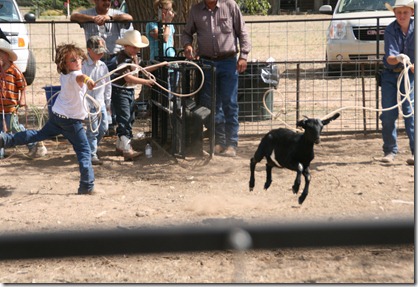 The topic of religion  was hit in several ways throughout the camp. People shared testimonies after meals (participants were  served breakfast, lunch, and supper, which, by the way, members of the community were also invited to enjoy), during the day between roping sessions, and at night after supper, with worship in the tabernacle, the open pavilion pictured above,  built near the Good Times Arena. The community is always invited to the worship services as well. This year campers heard from Ryan and Kari Pate from First Assembly of God Church with musical accompaniment by Trevor Turnbow,  Monty Leavell from First United Methodist Church with the Joyful Noise singers,  as well as Steve who spoke Tuesday night. Music  was provided Tuesday night  by the Triple L Band from Portales, New Mexico and the MCF Praise Band, comprised of Mica Ruthardt, Logan Ruthardt, Cory Hunt, Angel Hunt, Trevor Turnbow, and Khalli Ruthardt.

Supper in the dining hall before Tuesday night’s worship service. 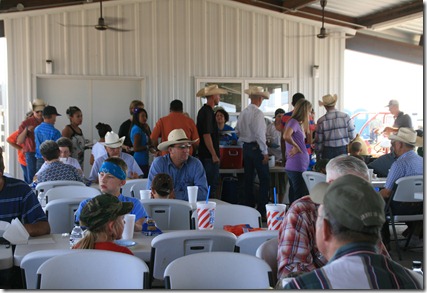 Charlotte, Shelby, and West Cockerman from Texico, NM, have taken part in the camp for the last few years. 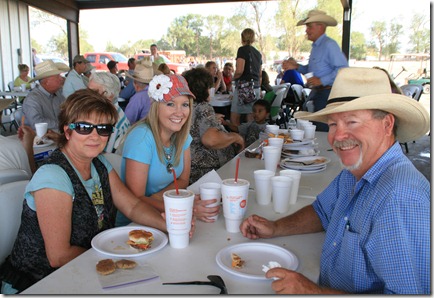 David and Terry Marricle, Irene Mason, Jay Messenger, and Mary Lou Leavell led the singing at Tuesday night’s service. Not pictured are W.T. and Pat Watson and Sally Messenger who accompanied them. 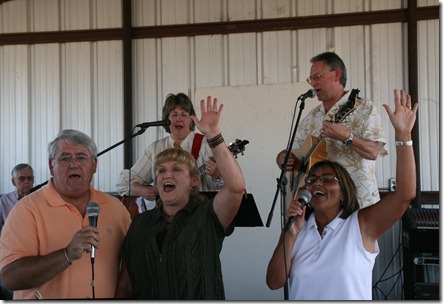 Monty Leavell shared a fitting analogy comparing God’s armor to cowboy gear: the belt of truth, the vest of righteousness, the boots of the gospel of peace, the chinks of faith, the hat of salvation, the knife of the spirit, and the spurs of encouragement. 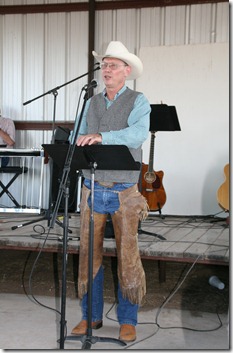 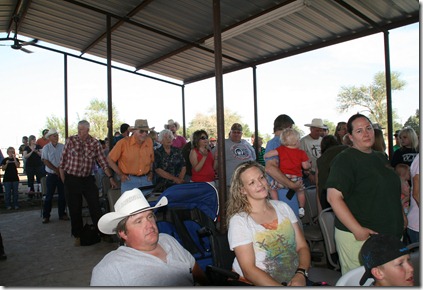 Campers and community members enjoy the worship services in the tabernacle. All that practice was tested the last day of the clinic with roping contests using all the skills worked on during the camp.  Red Bluff belt buckles were awarded to all winners, and all campers received T-shirts and caps. Kail Brunson of Plainview won the 5 and under dummy roping, Trail Townsend of Earth won the 6-9 division, and Heath Houston of Lubbock won in the 10 and over group. Steer stopping, which is one roper roping the steer’s horns and stopping the steer, was won by Buck Barnes of Amarillo. And the team roping, which is what  all this practice leads up, to was won by Gary Crandall of Earth and Sid Morris of Muleshoe. So if roping, riding, or religion happen to be one of your main topics, come the third weekend in July next year, you might want to consider a trip to Muleshoe to take part in the Christian Roping Camp. Not a bad way to spend a few days with your horse, your family, your God. 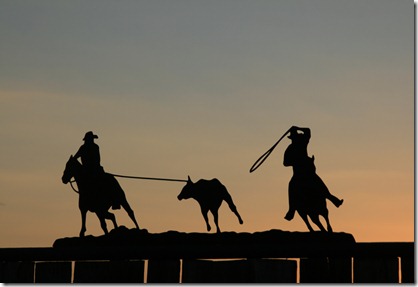 And to that, all God’s children can say Amen.