Wyoming for the Third Time 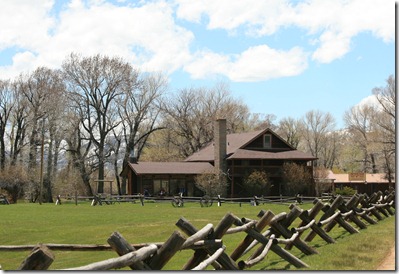 I couldn’t resist. Page Lambert was having another Literature and Landscape of the Horse retreat at the Vee Bar Ranch outside of Laramie. I left a big rock there last year that needed a new home, and the extra practice and tips on writing are always helpful. Besides, there were horses to ride and new country to see. What a deal. I drove again; if you think the airlines are making a killing on baggage fees, just imagine what bringing rocks home would be like. Well, it would never happen, of course, so off I went with an empty trunk, work gloves, and shovel, just in case. I left Muleshoe by 7 am, which meant I pretty much had the roads to myself in New Mexico, and that was nice. No traffic, straight roads, and a 65 mph pokey speed limit. Then  in Colorado I finally hit 75 mph with a little traffic, but I had to drive 80+ or risk getting run over.  Unfortunately, the farther north I went, the worse the traffic became. Houston traffic just can’t be any worse than Denver Traffic. But I finally pulled into Ft. Collins, found a hotel, and my blood pressure calmed down. The next morning I headed out for Laramie on the scenic route, which it is, and encountered snow drifts that haven’t melted yet, a change from previous years.I passed a sign that said highway 130  closed past Centennial, due to lingering snow I am later told. By the time I pulled into the Vee Bar I couldn’t see the mountains for the fog and mist. And it is 32 degrees. Definitely a late Spring for them. 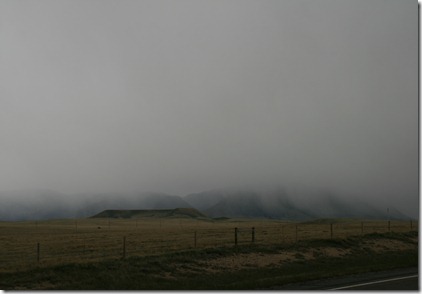 The weather finally turned off  agreeable for the majority  of the retreat, well, except for the day Kari and I chose to dig cactus and gather rocks-and it sleeted and the wind blew 65 mph. And the last day was almost hot, so as Sheri Griffith says, there is no bad weather, just inappropriate clothing. So the layers came on and off as needed, and we had a great time. I will tell the rest of the story in pictures with a few details here and there: 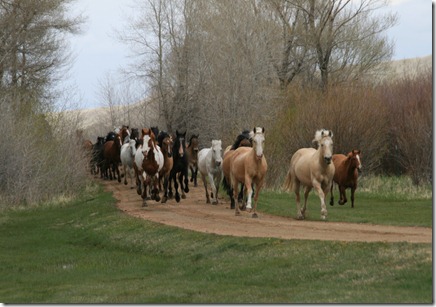 The wranglers brought the horses up from pasture every morning around 7, and it was always a pleasure to see them come charging in. 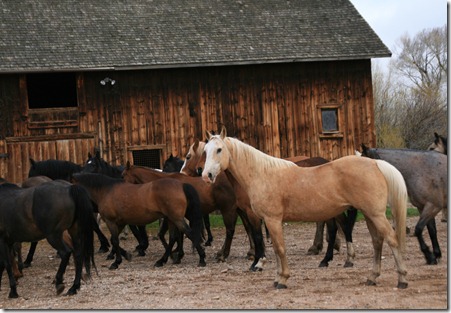 I have ridden this palomino, Malcolm, for the last three years. This year Brent let me cut a bridle path in his mane, trim his fetlocks, and shorten his tail-just a little. Now if I just had a halter class to show him in. 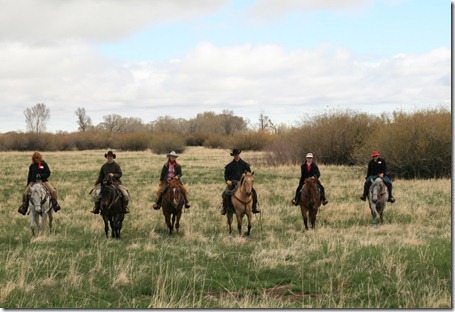 One of our many rides through one of the pastures. 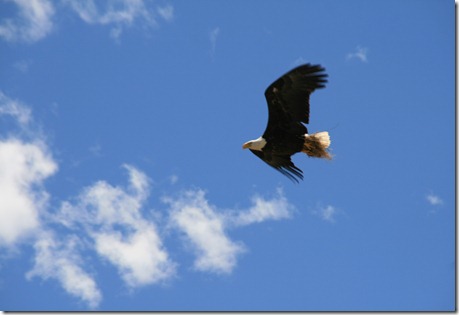 The eagles were still there and had two babies in their nest. 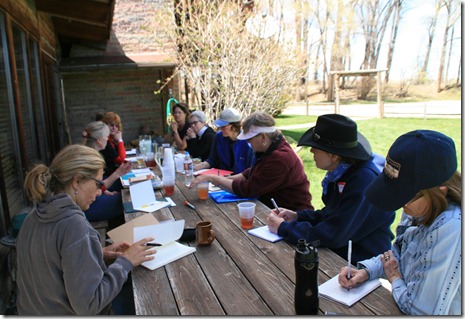 We had several writing sessions; this one we did outside when the weather turned off nice. 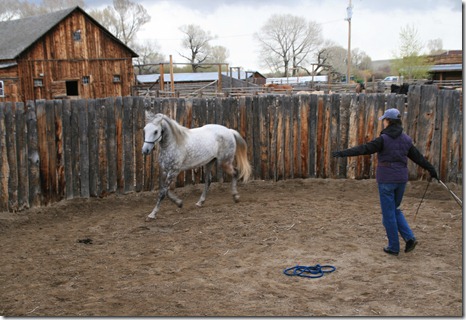 Brent and Sheri both did round pen training demonstrations. Here Sheri puts her horse through his paces. You would be amazed at what consistency, firmness without hurt, and patience can do with an animal that outweighs you several times over and does what you ask because he wants to, not because he has to. 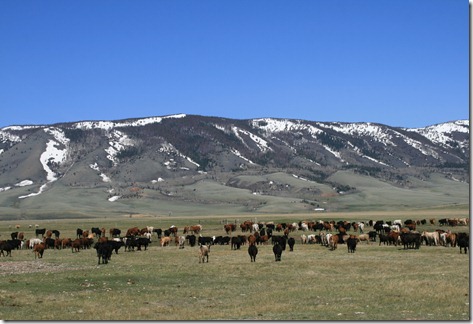 One day we got to play cowboy and moved 600 head of steers from one pasture to another. They behaved, even though Brent said a yearling steer is one of the dumbest animals alive, so it really didn’t test our cowboying skills. But it was fun. 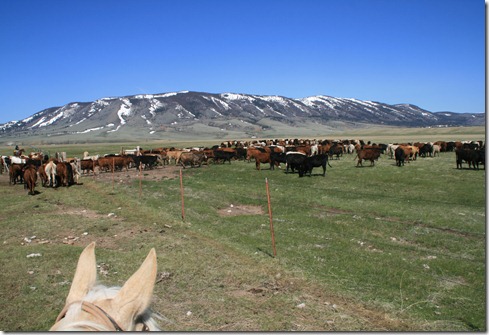 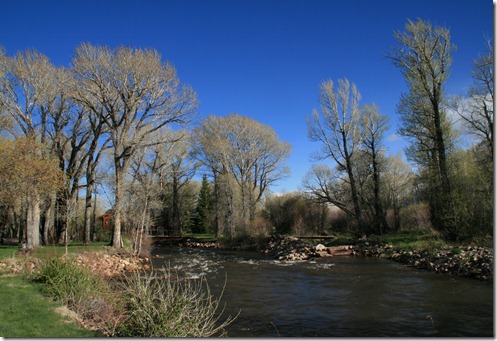 The Little Laramie river runs through the Vee Bar and behind the cabin where I stayed. The  narrow-leafed cottonwood trees had not leafed out when I arrived. By the time I left, they had greened up considerably. 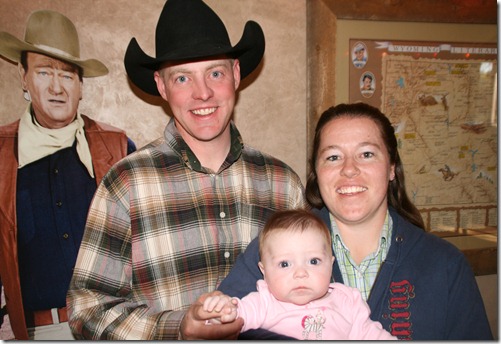 Brent, Kari, and new family member Bailey are the owners and our hosts at the Vee Bar. This picture was taken in, yep, the John Wayne Saloon there on the ranch. It is really not so much saloon as meeting and visiting place. 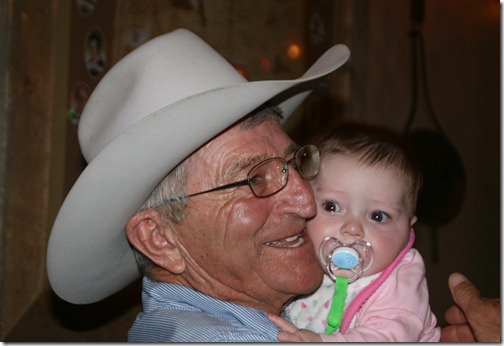 Tommy has been a wrangler every year I have been to the Vee Bar. He is crazy about this baby. 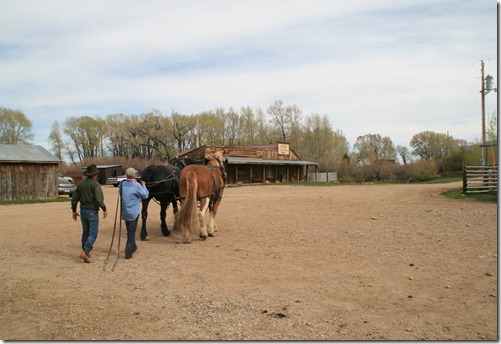 We all had a turn at driving the draft horses who later pulled our wagon for a little hayride/musical ride. Once you drive horses, you understand what gee and haw are all about. And you realize just how huge these horses really are. 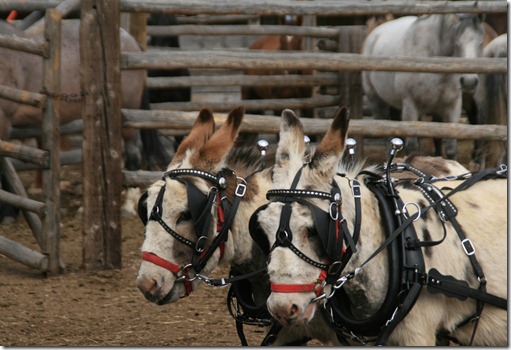 New to the Vee Bar this year were these two miniature donkeys, Kit and Caboodle, whom Brent was teaching to pull a little wagon. 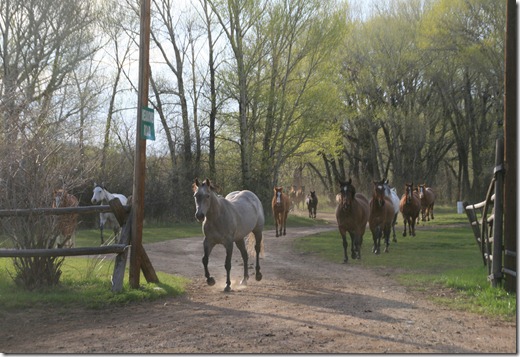 This day the horses came in from a different pasture. 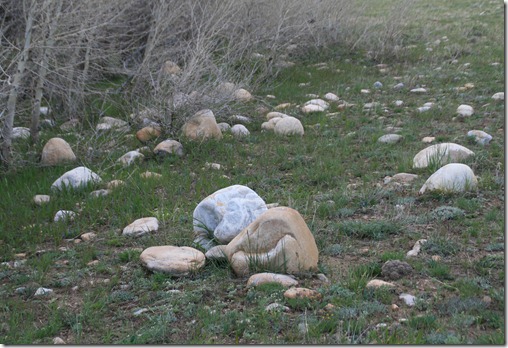 Rocks I had to leave there, darn it. 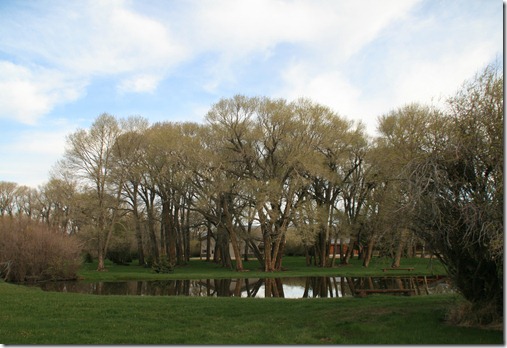 This is what you see as you drive into the ranch. 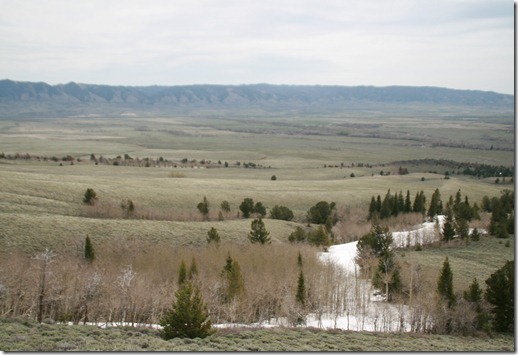 Another one of the views we enjoyed on the all-day ride when we hauled the horses to another location. 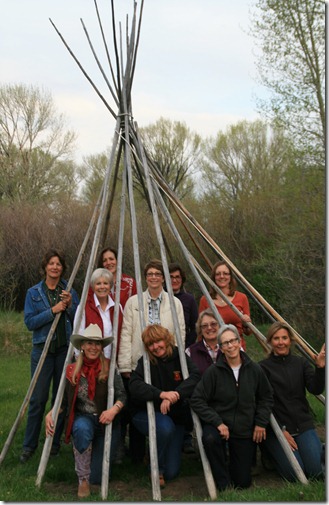 We posed for our group shot in the teepee frame. I represented Texas; others were from  Minnesota, New Mexico, Arizona, Wyoming, Pennsylvania, and three from Colorado. Sheri is from Utah, and Page lives in Colorado. 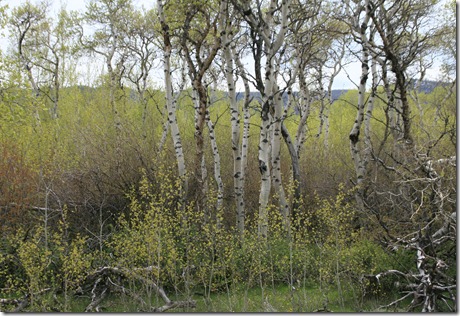 The aspen trees are always pretty with their lime green leaves and black markings on the bark. I could just go on ad nauseum, so if I haven’t lost you already, dear reader, I will bring this  to a close. The trip odometer read 1386.4 when I pulled into my drive-way in Muleshoe. I traveled in four states, met eight new people, and had a great time. And besides that, Malcolm was glad to see me, as I was him. Happy Trails, y’all.