Thirty years ago when we moved to Muleshoe we bought land for our house from E.T. Ford. On January First  E.T. celebrated his 90th birthday. He was actually born at 2 pm on January 2, 1921, five miles northeast of Boyd, Texas, but New Year’s Day seemed a fitting day to begin working toward his 91st birthday party. E.T. has had quite a life in those 90 years. And the amazing thing about it is that he can quote not only dates and years, but the time of day something happened. Heck, I can’t remember what happened yesterday, let alone 50, 60, 70 years ago. 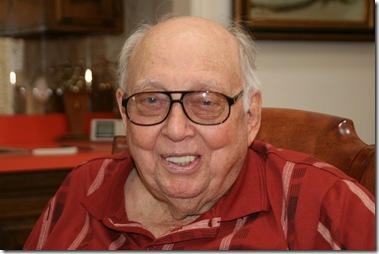 But I digress. He also remembered that his class of thirteen seniors graduated from Boyd High School in 1938 and his high school coach helped him get a scholarship to play football and basketball for Decatur Baptist College. But  the Depression hit and he left school to work. In Boyd during high school he had worked at a bank before and after school, earning a whopping $1.50 a week for sweeping in the morning and posting checks in the afternoon. Bank president R. E. Petty helped him find a job with Citizens National Bank in Lubbock as a teller. As luck would have it, it was during this job that he met his future wife, Chris, who came to the bank with deposits from Swift and Company.

About this time E.T. was made aware that he was about to be drafted, so he joined the Navy. Naturally, with typical military common sense thinking, after all his banking experience they had him sorting nuts and bolts. That was just not his cup of tea, so when he heard the Navy was looking for weathermen, or aerologists as they were called then, he applied, was accepted, married Chris in February of 1943, and served at the Naval Air Station in Grand Prairie until he was assigned to the  USS Howard W. Gilmore AS-16, an auxiliary supply ship for submarines. He was 30 years old. The job of  his sub tender, as it was called,  was to supply submarines with diesel and torpedoes. One of their missions sent the ship from Pearl Harbor to the Marshall Islands, back to Pearl and on to Brisbane, Australia, where they joined an armada at New Guinea and then on to Subic Bay in the Philippines.

It was March 3, 1945. He was the only weatherman on the ship, and he forecast a hurricane. The hurricane did hit and his ship weathered it well as they knew to prepare by facing into the oncoming winds and dropping anchor. Other ships whose commanders were skeptical did not prepare and wound up blown on the shore. E. T. said he was awarded a commendation for it, but for some reason it was not included in his service record.

After spending his entire naval career in the Pacific Theater he was discharged on October 5, 1945, in San Diego. Chris was living in Orange at the time taking care of her ailing mother. E.T. tried to work in Lubbock again, but thanks to the war, tellers were now all women and the job didn’t pay much, so he found a job at the Dallas Grand Avenue State Bank, which also didn’t pay much. He decided he could do better than that and was accepted into the University of Texas. He graduated in 1950 with a degree in architectural engineering.

E.T. went to work for Robert E. McKee in El Paso, a building contractor with offices in several cities. E.T.’s  job was in Santa Fe, New Mexico, where he designed buildings to be used in atomic bomb test sites in Nevada. After five months of commuting from El Paso to Santa Fe with Chris holding down the house in El Paso, they were offered a farm by her father in Morton. He had had a good year and assured E.T. that “ you can’t help but get rich farming!” So they moved, bought a cow, two pigs, chickens, and equipment and gave it a try. I asked E.T. if the animals were there to help them  be self-sufficient on the farm. Yes, he told me, but when I asked if it worked, he laughed and said no. But he did make 150 bales of cotton that year.

He stayed with the farming for one more year, leased some land in Lazbuddie for three years, made some money, bought another farm, but had trouble sleeping knowing he had all that debt at the bank. At this point he and Chris built and moved into a house on the Plainview highway, and he drove to the farm. But that house began his move into the house-building market, which of course allowed him to ease back into his natural trade and use his degree.

It took until 1968 for him to go broke farming, and building became his main source of income. More houses, the original Muleshoe nursing home, churches, and yet more houses followed. Then came the Country Club Edition and houses he built there. This was also the area where part of the land was in the 100-year flood plain, making it a bit more costly, so E.T. donated it to the city. It is now the Roger Miller Little League Ball Park. So everybody benefited.

We bought 20 more acres from E.T.  a few years ago. E.T. told Bill he dropped the price a bit because he felt like he may have sold the first land to us at too high a price. Bill asked, “Do you want to write me a check?”

E.T. retired in 2001 and his beloved Chris died this past August 8th. He spends his time now enjoying Matlock and Maverick reruns, a little football, a few computer games, and occasionally Bloomberg and the weather. He’s also a pretty good day trader, working 26 accounts  for 2-3 hours a day and cashing in his dividends. “I don’t make much money, but I do pretty good,” he laughed. 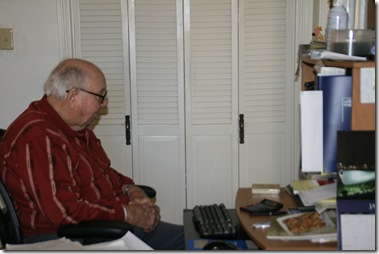 Does pretty well, indeed.  From Texas to the Pacific and back again, predicting hurricanes and building bomb test houses.

Quite a life and still loving every minute of it.

Thanks, E.T., for sharing your life with me for this story.