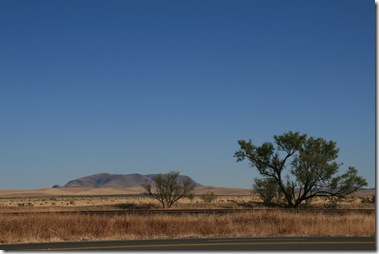 My friend Elaine and I finally managed to take our  long talked-about but often postponed trip down to deep West Texas. We saw lots of country, enjoyed two lovely historic hotels, and found several good places to eat. Lots of country. Boy, that’s an understatement; we were in West Texas, for crying out loud. If you aren’t familiar with Texas geography, consult your  map while you read this. I drove from Muleshoe to the Midland airport where Elaine had flown in from Houston. We backtracked to Andrews to eat a pile of steak fingers at Buddy’s, known far and wide around here for great chicken fried steak and huge portions. 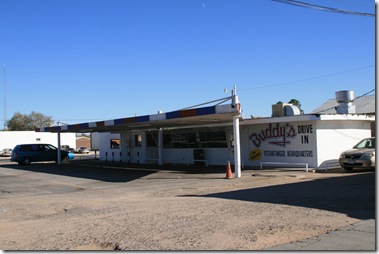 Then it was through Kermit, Wink, Pyote-cool names, huh?-Pecos, Balmorhea, Ft. Davis, ending in Marfa where we were to stay for two nights at the Hotel Paisano, established in 1930, but put on the map when the cast and crew from Giant stayed there while filming the movie. We shared the hotel with a group of Germans who had come to town  to appreciate examples of the minimalist art which seems to have put Marfa on the art appreciation map. We overheard them asking where the lift (elevator) was, and of course, there wasn’t one, so I don’t know how impressed they were with West Texas. 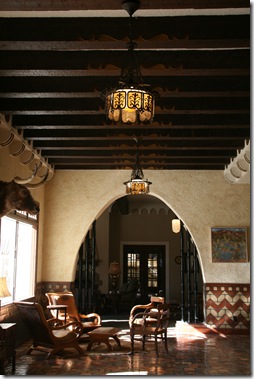 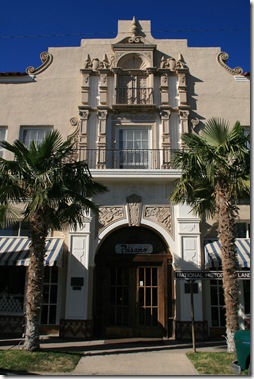 That night we ate in the hotel restaurant and drove four miles out to the Marfa Lights Viewing Center, something else Marfa is known for. We didn’t see any of the mysterious bouncy unpredictable and unexplained lights, but to be fair, we weren’t really dedicated to the cause and left pretty soon after we got there. It was cold and windy! 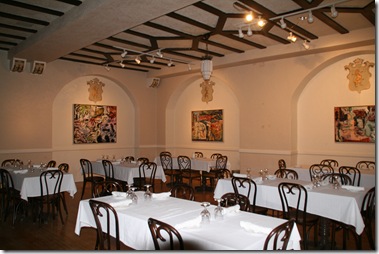 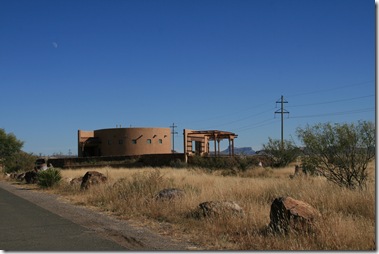 Sunday morning we were up early to see all the sights. Turned out nothing was open, so there wasn’t much to see. The hotel didn’t serve breakfast, so we wandered around and finally found a place open, Cochineal, except they didn’t serve me any breakfast. I asked for oatmeal, and they were out. I asked for a croissant and was told they wouldn’t be ready before ten. So I had a cup of hot tea. Elaine had huevos rancheros. The food situation didn’t impress us, but they had a pretty outdoor courtyard area. 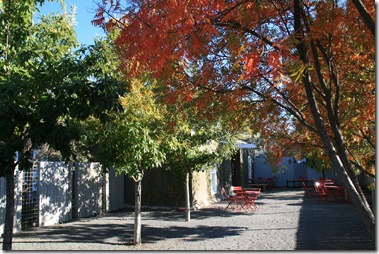 We drove to Marathon with the intent of eating at the historic old Gage Hotel, only to discover they only serve dinner. So we walked down the street to a hamburger joint, Johnny B’s and watched a few interesting locals come and go. 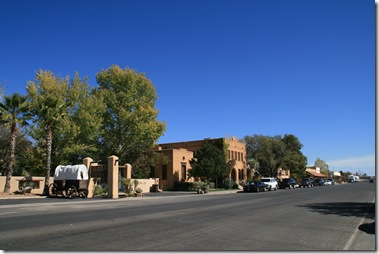 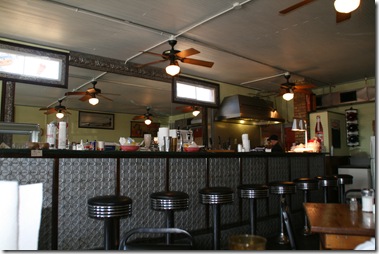 From there we went to Alpine, admired the campus of Sul Ross University and still couldn’t find any place open for shopping. Then we stumbled on a man working on the front of his store, and he graciously opened for us. Back to Marfa, where still not much was open, but we managed to find the Q Cafe and Wine Bar and struck up a conversation with owners Pat Quin and Thomas Schmidt who came to Marfa from Houston, which gave us much to talk about, and we wound up spending about three hours there eating and talking. And Elaine actually drank a glass or two of wine. 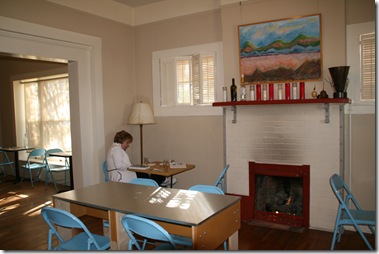 Our goal for Monday was to make the scenic drive that follows the Rio Grande from Presidio to Lajitas. We checked out of the hotel and took off south on highway 67, passing through the tiny ghost town of Shafter on the way to Presidio. 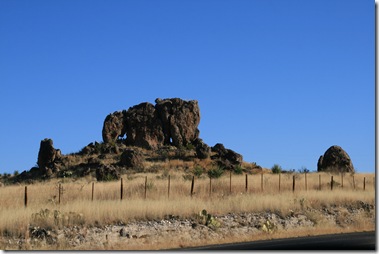 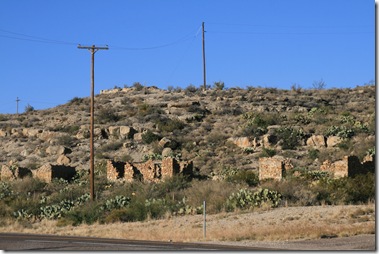 We then followed highway 170 driving parallel to the river. Texas Monthly claims this drive to be one of the most scenic in the United States, and it was a lovely drive. But in the spring and early summer I imagine it is even more spectacular. About the only other people we saw on this drive was one or two Border Patrol people. It was just us and roadrunners and javelinas. 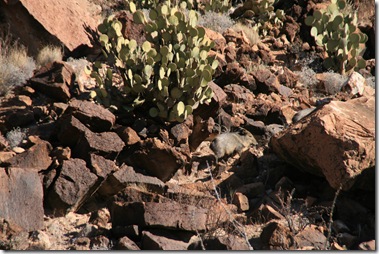 Look closely and you can find a javelina in the middle of the picture. 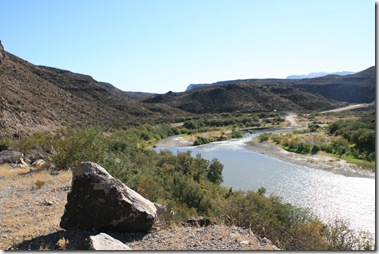 Lajitas is pretty simple: a yellow-brown cemetery that blends into the hill; a golf course; a shopping area called the Lajitas Boardwalk which also has a nice hotel and restaurant, and the Candelaria, which overlooks the golf course, where we ate lunch. 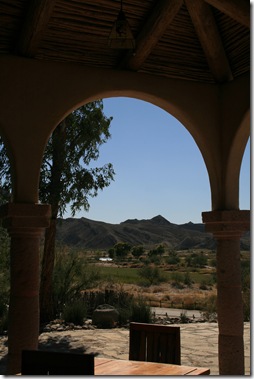 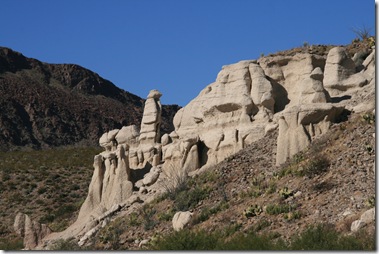 We drove through Terlingua without stopping, no chili cookoff at the time, and did more shopping in Alpine, since now things were open. After missing our turn and making a few circles in Alpine, we managed to find our way to Ft. Davis, which, if you are looking at your map, you can tell  should have been a no-brainer. I swear the arrow on the road sign pointed straight ahead and it should have pointed to the right. But we finally got there, checked into the Hotel Limpia, founded in 1884, and ate Mexican food at Cueva deLeon. 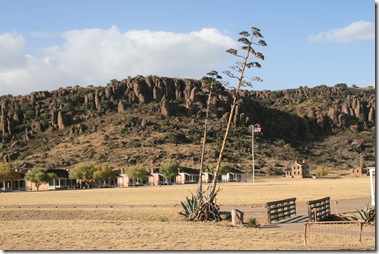 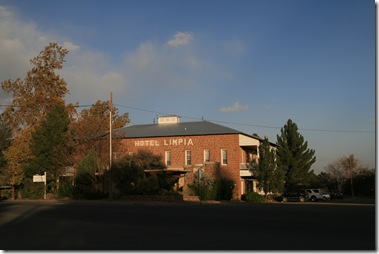 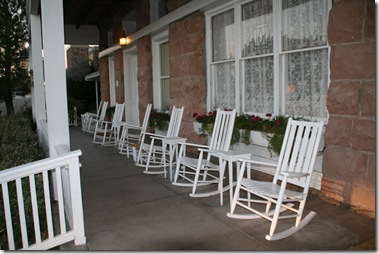 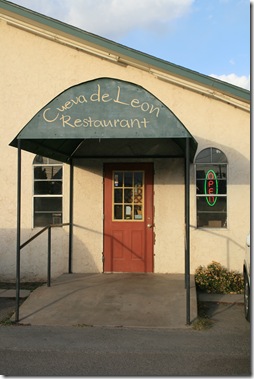 Where the Hotel Paisano was somewhat  Mediterranean/Spanish, the Hotel Limpia was Victorian/Grandmother’s house. And they had a great big cat, Tuxedo, who didn’t seem particularly worried about welcoming guests, as cats are wont to do, but hung around, just in case. 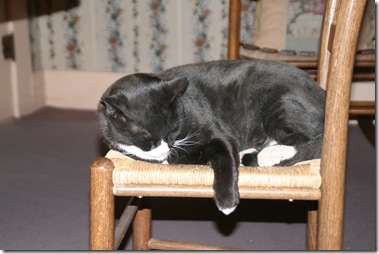 Tuesday was the end of the trip, but we had one more eating stop to make, breakfast at Mary Lou’s, where we were told was a favorite of the locals. And it was. 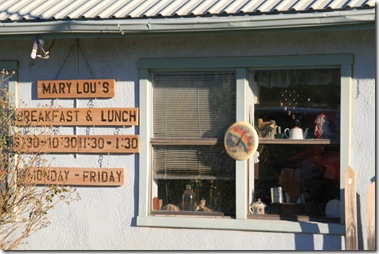 I took Elaine back to the Midland airport and made my way home, this time by way of Lamesa so I could stop in Lubbock for a few errands before going home.  That was a nice change from the Andrews route because, alas, the Andrews part of West Texas is not known for its scenic appeal. Oil well pump jacks  and steak fingers, yes; scenic beauty, no. 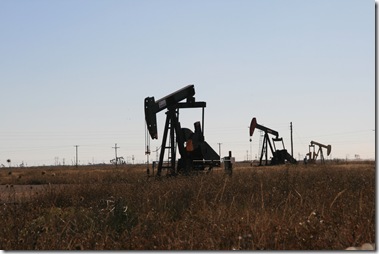 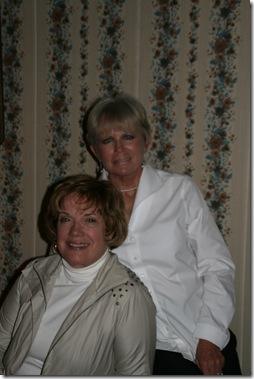 That’s Elaine in front; I am in back. So that was the West Texas tour. I highly recommend it. Traffic is non-existent-well, there was a little in Alpine- shopping is interesting, and the landscape is beautiful. The area is different from anywhere else in Texas because it is so isolated and laid-back. Be prepared to drive great distances and eat lots of good food.