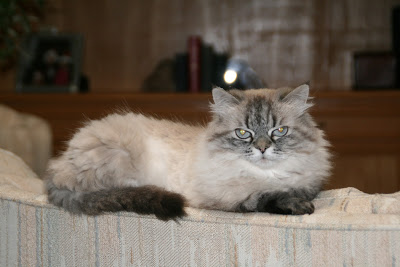 Kitty came to us by way of Bill’s mother, Eloise, who, for a time, lived at the Harmon Elliott Senior Citizens Complex here in Muleshoe. This scrawny, dirty little cat showed up at her apartment, just matted hair and bones, very hungry and very scared. Eloise managed to catch her, named her Kitty Cat, and proceeded to spend a small fortune trying to find a cat food she would eat. I mean, this cat makes 9-Lives’ Morris look like a glutton. We always shook our heads and rolled our eyes at the line of saucers Eloise had lined up with dried out canned cat food on them. Now we understand: Miss Finicky was turning up her nose at all that Eloise put out for her to eat. Now we go through the same routine, and with equally frustrating results. She will finally give in and eat something,  but she weighs all of four pounds, no matter how much she finally does eat when we find something she actually likes-and will beg and meow for. The thing is, she will eat a flavor once or twice, then decide she is tired of it and want something else. She eats dry food when no one is looking.

Kitty came to live with us when Eloise had to move to the nursing home. She hid in our closet for three weeks before she felt safe enough to venture out when we were around. I have read theories that suggest a cat’s personality is revealed by its body type and shape. According to this theory, Kitty is a round cat, or a circle, because she has a round body (even if she isn’t fat-the fluffy hair, you know), round flat face, and rounded ears. Circles are emotionally sensitive, affectionate, not comfortable around strangers, dislike chaos, and would just as soon plant themselves in a lap as anything else; be a throw pillow with legs, is the way the theory puts it.  And guess what? The description fits her perfectly. 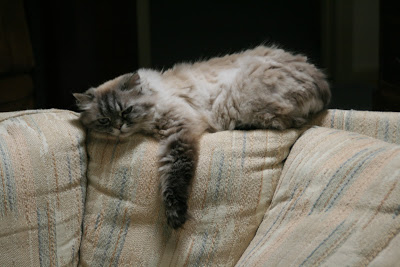 When Kitty is not parked in front of her food saucer turning up her nose at our latest offering, she is following me around waiting for me to sit down so she can jump in my lap, just like the theories suggest. Early in the mornings she hops up on the bed, makes her way to my chest and proceeds to make bread on my neck. Since she had been declawed when she appeared, her kneading my neck feels kind of nice, like a mini-massage. She has a soft, almost inaudible purr when she is content, and always keeps the area warm wherever she decides to settle down. 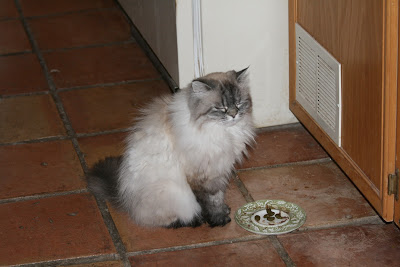 I don’t know why an expensive pedigreed cat like Kitty would have become a stray, and despite her penchant for refusing food, I will have to say it has been a pleasant experience having her around. Those big blue eyes speak volumes, going from righteous indignation to eagerness for attention and everything in between. And in between lap sessions, even without her claws she has also caught a few mice who manage to make their way into the house in the wintertime looking for warmth. Yes, we have mice occasionally; our house is built in the middle of a pasture, for heaven’s sake. It happens.

But if you decide on a round cat, it will have long hair, and if it has long hair, be prepared to clean up hairballs. It is the nature of the beast. But it is worth it.