As they have for the past eighteen years to raise money for their various service projects, the Muleshoe Rotary Club staged a three-day team roping event over the Labor Day weekend at the Dusty Rhodes arena next door to the Muleshoe Livestock Auction on Highway 84. 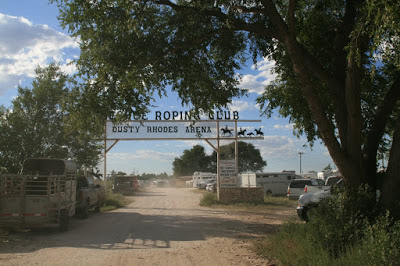 I would have known it was well-attended even if I hadn’t talked to any Rotarians about it because the dust and haze stirred up in the arena is easily seen from our back yard, and we can hear Sherri Harrison as she announces on the loud speaker which team is up next. Thurman Myers, who is the producer and helps with the roping, said they had 1,062 teams to participate in four ropings and paid out $60,000 in cash and prizes. The Rotary Club netted between $12,000-$13,000 to use for scholarships and donations to service organizations here in Muleshoe. 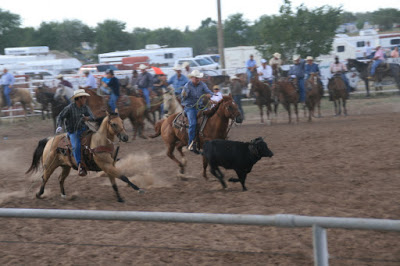 Team roping, for those who might not know, is a sport that developed from cowboys needing a way to immobilized  a cow or steer for medical treatment or  branding, whatever. The cowboy who ropes the head is called, of course, the header; the one who ropes a hind foot is called the heeler. The cow is then held between the two taut ropes while someone else tends to its needs, after which it is released. Naturally, bragging rights over the best roper had to crop up, and team roping as a sport was born and has become very popular all over the United States. They even have their own organization, the United States Team Roping Association, which even brings cowboys from Hawaii over to compete in the big shows. 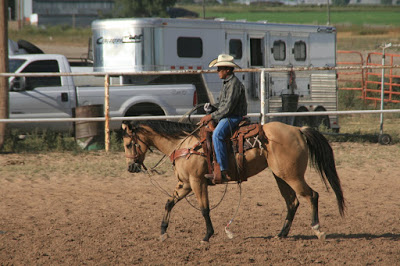 Now team roping may sound pretty simple: rope the head, rope the foot, stop the clock. Not that easy. Ropers are rated on their skill which plays a part in who they rope with and which roping they enter and even more that I am not privy to since I am not a team roper, and rather than botch the explanation, I choose to let you find out on your own if you are interested. But  I am not the only one who has a hard time with all the ends and outs of it. Way back there when Rotary had just started this weekend roping marathon and my husband Bill was a member, he and then superintendent of schools Bill Moore had been put in charge of organizing the teams and they had not a clue what to do with all the information crammed on those little pieces of paper they had been put in charge of.  Mandy Myers, niece of Thurman, happened by and they asked her what it was all about. When she said, “Oh, that’s easy. You do this and this, blah, blah, blah,”  an exasperated Mr. Moore told her that if she expected to graduate from high school in Muleshoe, she would stay there and do that job for them. He didn’t mean it, of course, but she did stay there and do that job and  they headed down to the strip chute where the ropes are taken off the steers and given back to the cowboys…and it all worked out just fine after that. 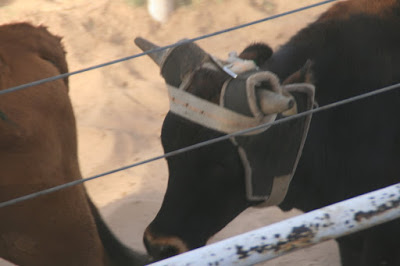 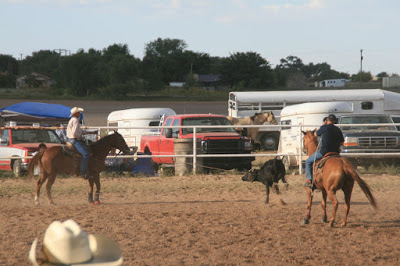 I have the winners of this year’s saddles, which were made by Jerry Beagley from Oklahoma. The number listed by their win signifies their skill levels, which is akin to a golfer’s handicap, and other than that, I am not going to try to explain it! The better ropers have the higher numbers.
No. 14 Roping- Clay Lewis, Clovis, NM and Chris Francis, Las Vegas, NM
No. 12 Roping- Stanley Dixon, Portales, NM and Ryan Brewer, Canyon, Texas
No. 11 Roping- Tripp Townsend, Earth, Texas and Ronnie Gonzales, Sudan, Texas
No. 5 & Under Roping-  Kelly Shea Spear, Lovington, NM and Patrick Bellis, town unknown 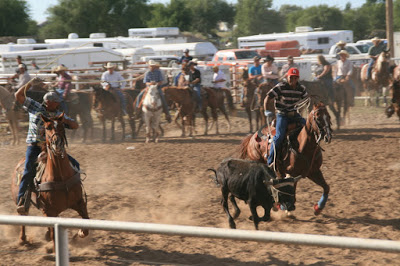 Over the years the kinks have been worked out, computers have helped, and things run much more smoothly. And the number of ropers has grown. Some years they are still roping at 3 in the morning to get everyone their turns. The Muleshoe Rotary roping has become quite a big deal and has allowed the club to give many scholarships and make many donations to worthy causes. So next Labor Day if you are looking for free entertainment, go check out the team roping. It’s not cheap for the ropers, but it’s free to you!