My Version of the Emerald City

The Wizard of Oz had his Emerald City; I have the Tolk Station. Looking to the east from our back yard or from my walking path around the pasture, Tolk is a continuous presence on the horizon that makes me think of the city of Oz; mysterious, full of lights, and always changing. 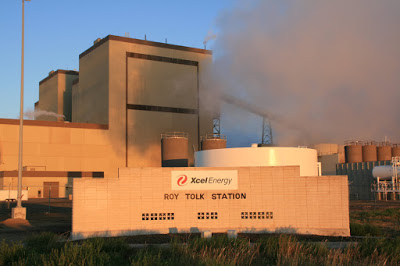 Tolk Station, for those of you not from Muleshoe, is the coal-fired, steam-electric generating station located between Muleshoe and Sudan off highway 84. Completed in 1985 and named after Roy Tolk, who was president and chairman of the board when Southwest Public Service Company (prior to becoming Xcel  Energy) built this facility. The plant uses coal from Wyoming which is low in sulfur, which makes it environmentally desirable. The coal comes to Muleshoe by train, 110-120 cars at a time, from the Powder River Basin. In fact, on my recent trip to Wyoming I saw a coal train humming along and was just sure it was headed for Muleshoe. As wrangler Tommy and I were riding one of those days at the Vee Bar Ranch, he told me that the strip mines in Wyoming are taking the initiative to reclaim those coal-mining areas, replanting and rehabilitating the land, just so you know that coal mining doesn’t always have to be a bad thing.
While the Emerald City of Oz evokes visions of green, Tolk is full of yellow and white lights that are always on the horizon when the sun goes down and enveloped in steam in cold weather from the heat produced by the processes going on at the plant. I always enjoy looking in its direction because it never looks exactly the same. And while a power plant doesn’t sound like a particularly beautiful sight, it has its own charm when viewed with an open mind. To borrow a line from Ray Stevens, everything is beautiful in its own way.
So let me share with you what I see when I look toward Tolk: 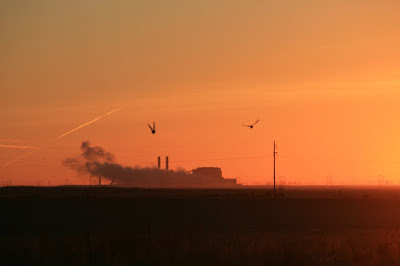 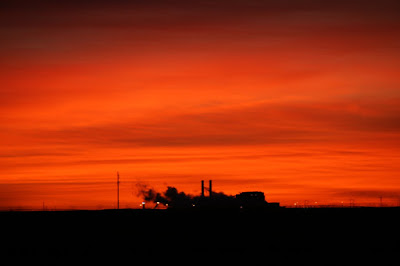 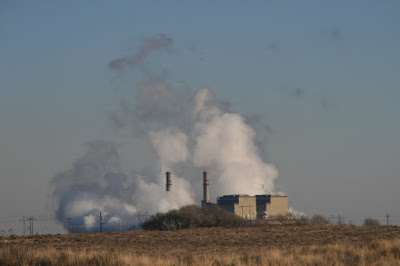 Okay, so this shot is not from my back yard, but from Highway 84 on the way to Lubbock one day in December. And while daylight cancels the twinkling lights, even like this it has its own unique look about it. 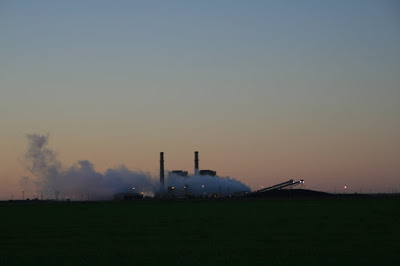 And neither is this shot-from my back yard, that is. We drove  up to the plant early one morning to take a closer version from a slightly different perspective for a friend who wanted a picture of Tolk for her son-in-law who works there. But I think it is an interesting picture, so I thought I might as well include it. 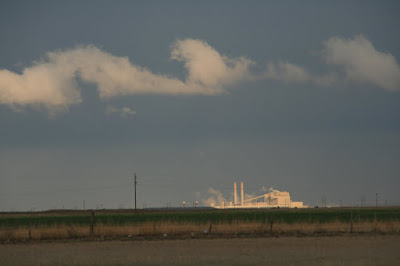 But I have saved the best for last. I came home one afternoon and the setting sun was hitting the plant just right, and this is what it looked like. So I rushed in the house and managed to get the shot before the light changed. I think this is a striking image.
Our flat landscape and striking sunrises and sunsets accentuate the subject matter, but Tolk is always a familiar and pleasant sight for me.
I will end with a funny story about another, older power plant  here called Plant X, which happens to be in the vicinity of the tiny town of Earth, Texas, about ten miles east of Muleshoe on the Plainview highway. I have no pictures of Plant X and can’t see it from my house, but the story goes that when it was built they couldn’t seem to come up with a name for it, so it was labeled Plant X kind of by default. A visitor was asking  why was it called Planet X. If you say it casually and sort of fast, it does sound like Planet X, sounding a bit like science fiction. This person was told very emphatically it was PLANT X, not Planet X. The next question was where was it located. Without realizing how it would sound, the local who was defending its name said, with a straight face, that  it was about five miles from Earth…
More information is available about Tolk at www.xcelenergy.com/Minnesota/…/TolkStation.aspx