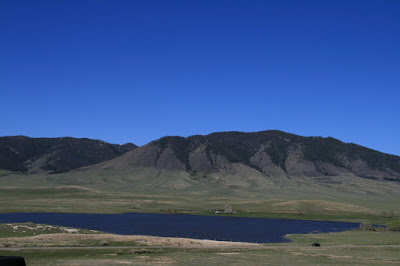 Last year I attended the Literature and Landscape of the Horse, a writing and riding retreat led by Page Lambert and Sheri Griffith, held at the Vee Bar Guest Ranch in Wyoming. I had such a good time I went again this year, but this time I took my friend Hellen with me, as well as Jenice Williamson, who used to live in Muleshoe. We drove to Denver, spent the night with Hellen’s daughter Christi, picked up Jenice, who had flown from Houston to Denver, and arrived at the Vee Bar, 30 minutes west of Laramie, ready to escape reality for a few days and pretend to be cowboys. Or cowgirls, I guess would be a better way to put it. 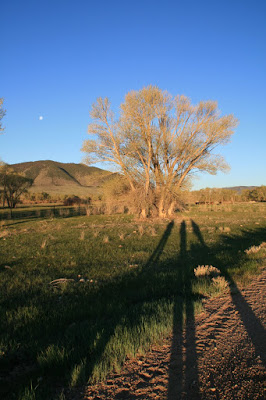 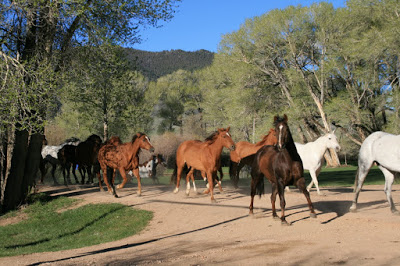 And escape we did. We were awake at sunrise, which seemed to start at 4 a.m. since the sky never really seemed to be dark, but was probably more like 5, and walked looking for wildlife, which in the mornings was usually magpies, eagles, and antelope. By 7 a.m. the wranglers, Brent, Darcy, Tommy, Conor, and Dave, had rounded up the horses and guided them into the corral by the old barn, which, in the old days, had been a stagecoach stop. The wranglers would halter the horses, which had been selected for each rider based on the rider’s experience, and we could groom and saddle our mounts if we wished, or they would do it for us. I liked the grooming and brought along the tail comb I had used on my mare all those years ago and had Malcolm , my palomino gelding, looking pretty darn spiffy. And what kind of a name is that for a horse? Malcolm. Really? When ranches handle as many horses as they do, I guess names begin to be hard to come by, so Malcolm it is. But I thought it interesting that the only other Malcolm I have ever know was a childhood friend named Malcolm. 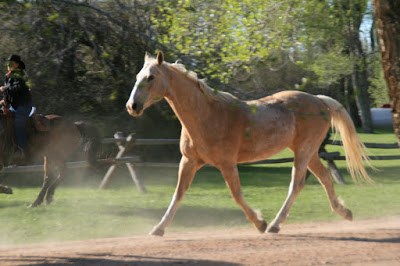 Malcolm
But I digress, as I seem prone to do on occasion. Stream of consciousness is a mystery, isn’t it? Anyway, the grooming was a pleasure; throwing that fifty pound saddle up on a horse whose back I could not see over was something else again. The saddle I used to ride was lightweight and I was, what, 50 years younger, when I used to throw it up on another horse whose back I also couldn’t quite see over. But that was then; this is now, as they say, and not nearly as easy now as I remember it to have been then. 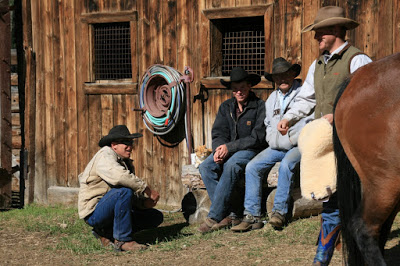 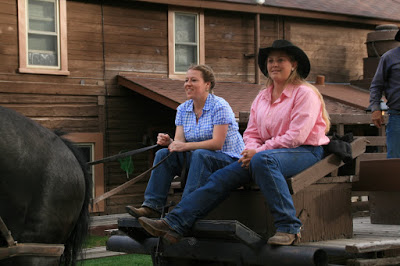 Kari and Darcy
We would ride in the mornings, broken down into three groups: black colts, who were the least experienced riders; the dappled grays, who were more intermediate in their skills; and the grays, the most experienced riders. Two wranglers would go with each group, and besides doing their jobs of guiding us through the rides, we got to know them and hear endless cowboy tales and tall tales of Wyoming, like Tommy’s modest boast that in Wyoming if you were riding with the wind, it was liable to blow the bit right out of your horse’s mouth, or that in Wyoming a wind sock was a chain with an anvil on the end of it. Darcy seemed to know a few jokes to share when the guys weren’t around, and she shared some gems she had learned while hanging around other cowboys. 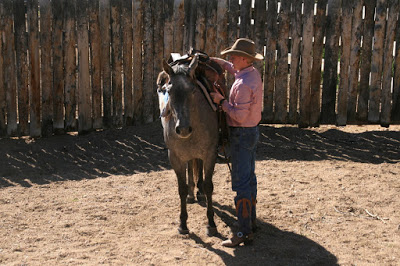 Brent in the round pen.
Brent, the co-owner of the ranch, and his wife Kari, were delightful hosts. Kari didn’t get to ride with us this year because she was five months pregnant with their first child and had been given orders not to ride now. But she did show us how to harness and drive the draft horses. Brent has to be the jack of all trades and master of none, he would smile and say, but it looked to us as if he knew exactly what he was doing when he had to work on the plumbing in our cabin, use the backhoe to unclog the Little Laramie river in one spot, shoe the horses, work the filly in the round pen, rope, doctor the lumpjaw on a steer, tag and band the calves, write songs and sing them like a pro. He used to teach music at a local school. I kept requesting stuff by Willie Nelson and Wayland Jennings and he would smile and say,” I don’t know that Texas stuff too much,” but  then would launch into “El Paso” and not miss a verse of that exercise in vocal endurance. 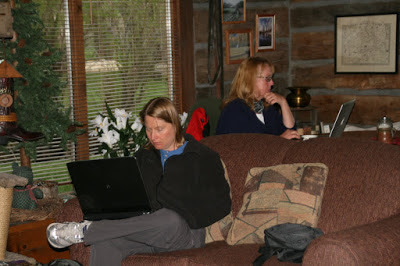 Jenny and Elaine
We would write after lunch, sharing and talking about what we had written, what we hoped to write, how to get published. We laughed a lot and were touched by what others, especially Page, would read aloud. And all the writing was motivated in some way by horses. Hellen chose not to write but to paint with watercolors during the writing sessions, and then she would show us what she had done. 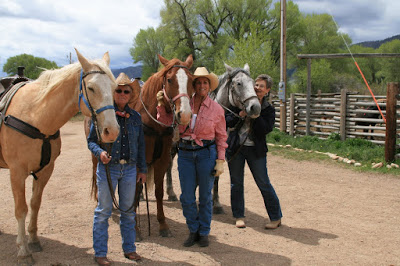 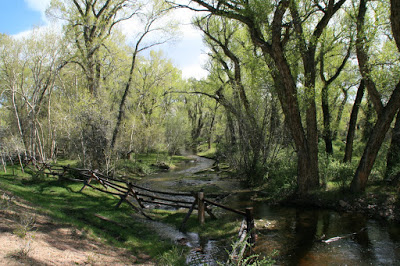