I Stood on the Roof of Africa

In 2007 I decided I wasn’t getting any younger, the world wasn’t getting any saner, and if I ever planned on seeing Africa, this was the time to do it. I also decided, and to save my life I can’t remember where this came from, that I should also climb Mount Kilimanjaro while I was there. Not surprisingly, I couldn’t find a single other person who shared my passion to climb the highest mountain in Africa, so just like the Little Red Hen, I decided, fine, I’ll just do it myself. And I did 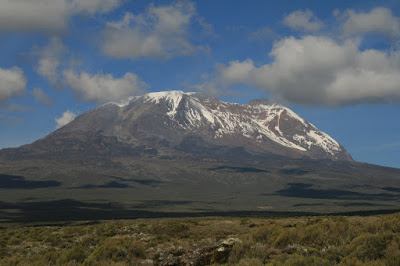 And what a trip it was. After being immunized for a boatload of diseases: typhoid, flu, tetanus, Hepatitis A,  Hepatitis B, yellow fever, and malaria; buying all the clothes and equipment necessary to trek through the five climates encountered on the  mountain, breaking in my really cool hiking boots, beefing up my exercise routine, reading up on Kilimanjaro and Tanzania, applying for and receiving a US passport and a Tanzanian visa, and becoming the proud owner of a nifty new digital camera, my patient husband took me to Houston International Airport, kissed me goodbye, and I was on my way to my very own big adventure.
After a 17-hour flight with a stopover in Amsterdam, I landed at Kilimanjaro International Airport at 9 o’clock at night. After passing the passport/visa checkpoint, I rounded the corner and just like in the movies, there was my tour guide, all smiles, holding a sign that said Thomson Safaris, 9 Day Trek. The eleven other Americans in my group and I eagerly walked out to the Land Rovers that would take us to our first night’s lodging. The night was still and quiet, almost surreal, and not at all what I was expecting. And that was just the beginning.
I took 1,396 pictures during the 13 days I was there, and I won’t bore you with all of them, although I’d love to, but if a picture is worth a thousand words, then let me share a few of my pictures accompanied with just a few words. 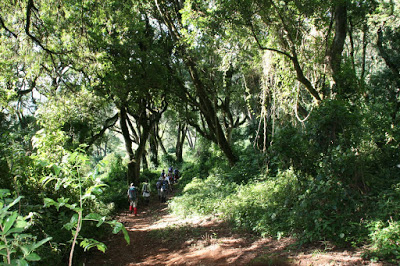 We started the first day of the trek at Londorossi Gate at the edge of Kilimanjaro National Park and entered the forest at 9,000 feet. This area was lush and beautiful and green. 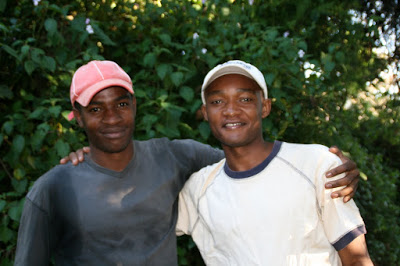 Gilbert was my personal porter and Godlove was one of the three assisant guides. At 61, I was the oldest member of the group and I think the head guide was afraid I might have trouble making the climb (silly man!), so I think he very quietly told Godlove to look after me closer than the rest. I always lagged behind because I would stop to take yet another picture, and many times I would look around and it would be just the three of us in the middle of nowhere without another human in sight. They took good care of me and we had good conversations along the way. I felt like I had my own private tour with them. 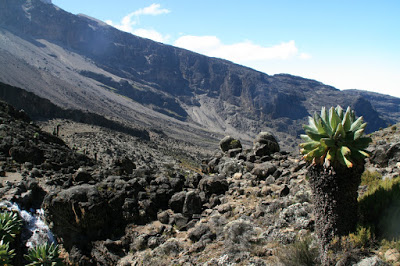 This is a giant groundsel tree, probably 20 feet tall and several hundred years old. We had climbed to 15,000 feet, but traveled down into Baranco Valley, 14,000 feet, and then back up again as part of the acclimatizing process. The terrain is beginning to become steeper, as you can see behind the tree. Lava rock and other volcanic debris was apparent here as it is in other areas, too,  which is only right since Kilimanjaro is composed of three volcano cones, two extinct and the one we are headed for, Kibo, is dormant. That night at Barafu camp, Bernard, the head guide, checked everyone’s oxygen levels and resting heart rate again to keep tabs on possible altitude sickness problems.   I may have been the oldest person in the bunch, but my numbers were always the best! 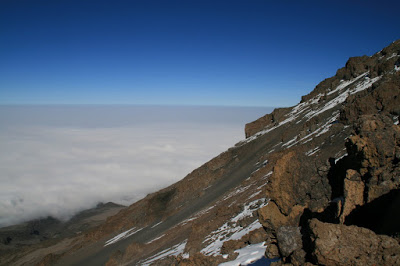 On summit day, we arose at 4 am, had breakfast and were on our way by 5, using our headlamps and flashlights to make our way up the trail. At this point we are above the clouds at about 17,000 feet.

In the distance is one of the many glaciers we passed on our way to the peak. The scree, loose slick gravel in the snow, made our footing tricky. The sky really was this blue and continued to be dark blue the higher we climbed. 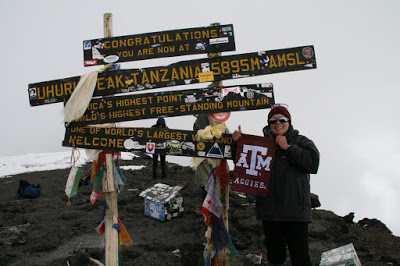 We started at 5 am; we summited at 2:45 pm. Here I am at Uhuru Peak, which means freedom in Swahili. My guidebook listed the peak at 19, 440 feet; the map of the mountain that I bought at the end of the trek says it is 19,685 feet. It is the higest mountain in Africa, the tallest free-standing mountain in the world, and the fifth tallest of the seven highest summits on each continent. I was blessed to have no sign of altitude sickness at any time during the entire trek. 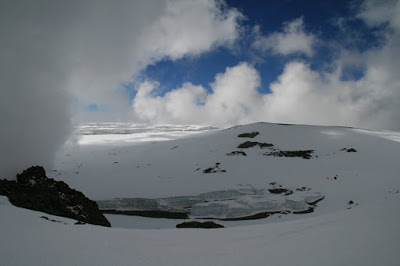 This was the view from the peak, glaciers all around. 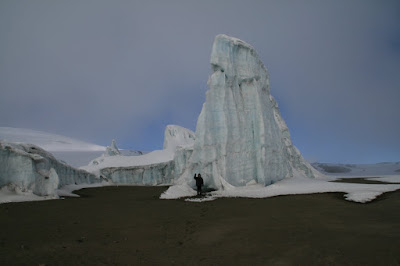 We stayed on the peak for about an hour and then went down 1,000 feet to Crater Camp where we would spend the night. That’s me in front of this glacier fragment. Crater Camp was across the moraine from the glacier. Don’t ever camp next to a glacier; That it is cold is putting it mildly… 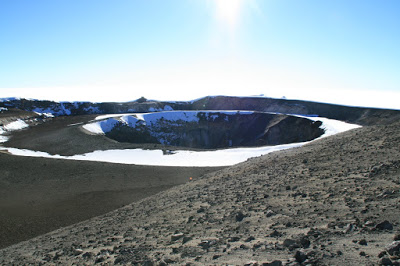 The next morning five of us chose to take a side trip up to see the crater rim of Kibo; the others started down the mountain. It was worth the extra climb and time. We did not go down the very edge of the crater, but people have reported the smell of sulfer the occasional stream of smoke coming from its depths, a sure sign it is still hot down there and not extinct. The heat from the volcano core is also partly responsible for some of the snow melting that everyone is blaming on global warming. I was told this is the most perfectly round volcano rim in the world. 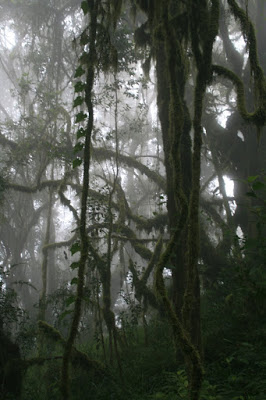 We hiked for eight days to make it to the summit, starting from the west, going east around the mountain, and going northwest to the summit, so we saw the mountain from many viewpoints. This also allowed our bodies more time to adjust to the altitude. We came down in a day and a half by a different route and came through this rain forest, quite a change from the woody forest, heather area, moorland, and alpine desert we had been through. At the final stop we were given an official certificate as bragging rights that we had indeed made the summit.
Yes, I stood on the roof of Africa. I saw the summit of Mount Kilimanjaro and experienced the presence of God in the process. Would I do it again? In a heartbeat. Being privileged to do it once? Priceless.
After the trek, I stayed on for a two-day safari, which I will share with you next week. In the meantime, if you would like to read more about my trip. log onto http://www.lubbockonline.com/  and look in the archives for the Lifestyles section dated August 28, 2007, to read the article I wrote about the trip for the Lubbock Avalanche-Journal. 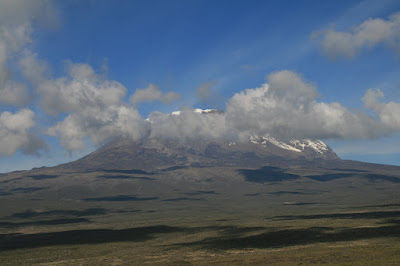