Dust Storm-and It’s Not Even Spring

January 22, 2010; our first big dust storm of the new year, and it’s a doozy. Mari and I were smart enough to take our three mile walk early this morning because by 9:00 the wind hit, and it was downhill from there. Or should I say ridiculously windy from there. I decided to drive to Littlefield (30 miles) to pick up the dry cleaning since it was not a pleasant day to do anything outside anyway. In the car was bad enough; I couldn’t just kick back and cruise to the music. I had to steer with both hands firmly on the wheel, be careful when going over the overpasses,  and try to dodge tumbleweeds while squinting to have any visibility through the dust in front of me. When I passed a dairy outside of Littlefield, I was enveloped in a cloud of solid brown dirt crossing the highway and slowed down considerably for fear of running up on an unseen car that might be obscured in front of me. Unfortunately, I didn’t have the camera with me, so I don’t have proof to show you just how bad the dirt was. 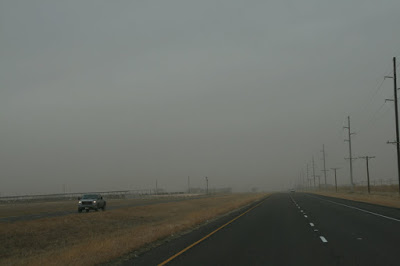 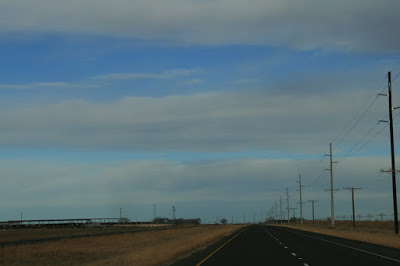 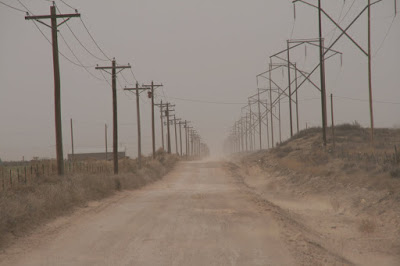 Dirt Road January 22, 2010
But I did have the camera once I make it back home, so  Bill and I took a little trip west of Muleshoe where there is another dairy, knowing it too would be blowing across the highway. Apparently this generation of dairy farmers who have migrated here from California have not heard of soil conservation techniques or didn’t have to deal with wind in California, because when you drive past any of the new dairies, the topsoil is blowing across the highway on its way to Oklahoma or Kansas or somewhere. This dairy, however, was not blowing away as much as the other one I drove past near Littlefield. 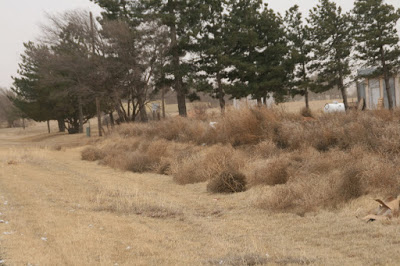 Ditch of Tumbleweeds January 22, 2010
Then we went south of town and were able to catch some tumbleweeds making their way across the highway, hunting for a new place to alight and wait for the next wind to come from the other direction on another day and blow them back across the highway again, or to pile up with their brethren to make a really big mess. I mentioned dodging tumbleweeds as I drove to Littlefield; well, you don’t really dodge them,; they have a mind of their own and tend to change directions just about the time you think you aren’t going to make contact. And while it’s not terrible to hit them since they shatter, the bigger ones can do damage to a car’s paint job. 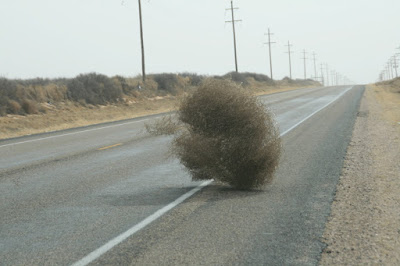 Tumbleweeds start life growing as Russian thistles. When they dry up and die, the wind uproots them and they blow hither and yon in search of other tumbleweeds to latch onto. If they are not burned off or physically removed, over time and more dust storms, the dirt collects and fills in and they become little hills or berms. Or if the tumbleweeds collect up against a fence, over time they will become solid with the dirt and the cattle can just walk over what used to be a fence. Those lucky enough to be town tumbleweeds wind up in the corners of backyard fences, in patios, on porches, or up against any structure, like this one under this carport, and have to be gathered and disposed of. Then of course, in the spring, it becomes apparent that Mother Nature’s plan of using them to disperse the thistle seeds was quite effective when I spend my time the rest of the growing season pulling thistle seedlings out of every square inch of ground in the cactus garden. 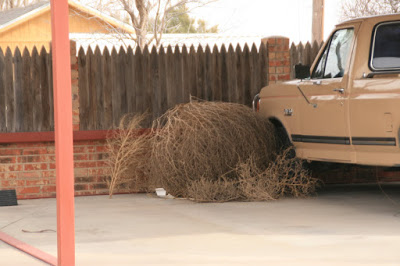 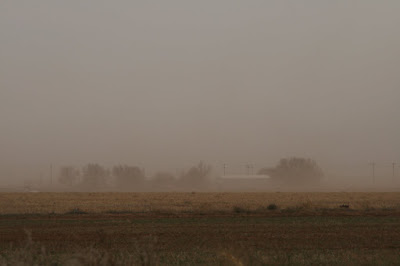 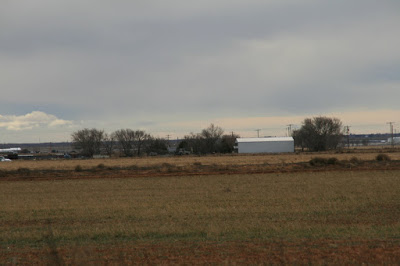 Farm House January 23, 2010
The sky will be brown and tan way up on the horizon, trash will blow relentlessly, dust will coat you and everything in your house, and when sunset comes, the wind usually dies down. Notice I said usually; not always. But on most mornings-after, we arise to blue sky, little wind, sunshine, and a lovely day with no humidity to curl hair and make skin sticky. The dust in the air also makes for colorful sunrises and sunsets, too. It is then that the old-timers agree that since it wasn’t an earthquake (shades of Haiti), a tsunami, a hurricane (Land-locked West Texans fear hurricanes more than tornadoes), volcanic eruption, or some other cataclysmic disaster, they will be glad to put up with a little dirt and wind.
After all, if it weren’t for that, everyone would want to live up here. 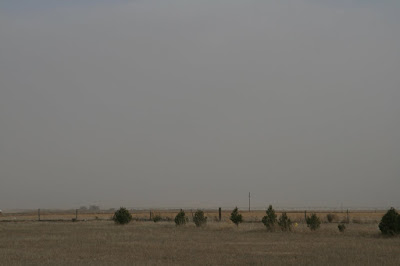 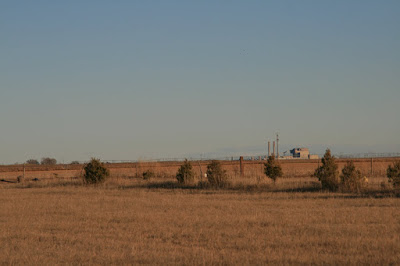