What is Your Given Name?

Back in the early sixties when I was growing up in Rosenberg and getting ready for school each morning, I would listen to Houston radio station KILT and the Hudson and Harrigan show. This was back in the days when radio stations had actual creative DJs and not satellite feeds with prepackaged scripts. Those guys were a whole other story, but one of their running bits was the Jim Bob Jumpback character and his family of good ol’ boys that Hudson and Harrigan used to poke fun at Houston city officials and state government and anyone else in the spotlight at the time. Jim Bob’s family included his sister Thelma Jean Betty Lou (yes, just one sister) and Uncle James Bob. These characters were immensely popular and  their double names were a big part of their appeal because double names were not that common in the Gulf Coast area. I think the use of double names is pretty much considered a Southern thing, or in Texas, linked with West Texas, so I didn’t grow up hearing that many doubles. I did go to school with a Carol Sue, Karen Sue, Karen Gail, Anne Marie, Carl Wayne, Gordon Lee, Billy Owen-wait, maybe it was a more common occurrence than I thought! But I didn’t know anyone who used a something-Bob combination.

But then we moved to Muleshoe, and suddenly Something-Bobs were everywhere. I have already mentioned our good friend, pictured below, Joe Bob Stevenson in the elevator story (High Rise Condo or Grain Elevator? October 16, 2009 in The Bright Lights of Muleshoe), and I have another Joe Bob story just to prove the double name thing isn’t common everywhere. When Joe Bob was working for King Grain, he had dealings with a grain company whose headquarters were in California. He called for some information one day and identified himself to the girl who answered the phone as just Joe Bob, thinking that was enough. She put him on hold and upon returning to the phone with the requested information, she started out, ” Mr. Bob…” 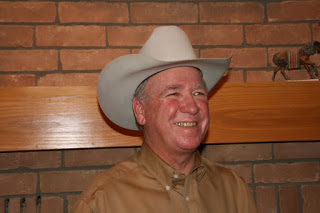 And then I was just told a friend here has an aunt whose name was Dora Bell. And then we also had a  Rose Bush, until she married, which changed the whole thing.