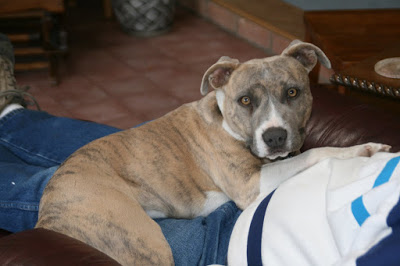 Now I ask you: does this look like the vicious, mean pit bulls we have all heard about? Or is this a cuddly lap dog waiting to be discovered? Mari took it upon herself to jump into Bill’s lap the other day, and he made the mistake of allowing her to do it, so now she spends lots of time there. Big surprise. But the fun part is watching this three-legged dog take a running leap and landing pretty gracefully right in his lap.
We are in week three of obedience training, and she has learned the “watch me” command, to sit, and is doing better at walking with a loose leash. She is doing a little better on the chewing, although we have gone through two packages of squeaky balls. The house breaking has its ups and downs, but I see a light at the end of the tunnel. And she still gets in trouble trying to play with the cats, who don’t want to play. But we have learned a lot of general information about dog food and how the dog brain works. And she definitely knows the word “no.” Well, except when it comes to chasing the cats.
One thing she does well, all on her own, is pass gas. She can clear a room faster than a baby with a full diaper and is perfectly oblivous to the gasping for air all around her. It is excruciatingly stinky. I light candles to try to burn off the gas, without much success, so mostly we laugh and leave the room.
We have snow on the ground right now, and she thinks that is great fun to run in, making huge circles in the back yard. She also likes to take bites of the snow. I don’t know what she thinks it is, but it keeps her entertained.
We go again tomorrow. I’ll keep you posted on her progress. 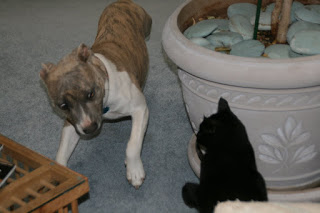