Christmas is a Road Trip 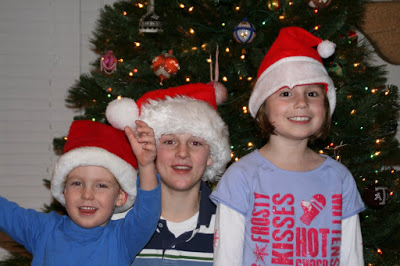 Ben, Colten, and Maya will be celebrating Christmas at Ben and Maya’s house in Kyle, Texas, this year. A Christmas tradition that I accidently started a mere two years ago has now become a tradition, for me anyway, of taking a picture of the grandkids in Santa hats by the tree. This one is from last year at our house. I will be lugging the Santa hats to Kyle so we can do it again this year, and wherever Christmas is next year, the hats will be there, too.
Most Christmases of my childhood involved driving all night from Rosenberg to Olney after Daddy closed the shop, about a ten-hour drive back in the days of two-lane highways, 60 mph speed limits, and no big city by-passes. I can remember sleeping in  the sundeck, that wide flat space behind the back seat under the rear window. Sundecks were much bigger in those days. Being the younger child and petite to boot, I was the one who fit the space; my older sister Louise had the whole back seat to herself. So I spent many hours staring into the night sky amid daydreams of horses and made-up melodramas. As we would leave the flat land around home and begin going up and down the hills, Daddy would challenge us to be the first one to spot the lights of the next town as we topped a hill. The winner got a nickel. I think Weesie, as I called her, would usually win, but always gave in to me if I fussed enough.
December in Rosenberg was more often than not warm, if not down right hot. But by the time we would roll into that little North Texas town in the wee small hours on Christmas morning it would be cold. Grandmother’s house had two screened-in back porches with double beds that served as bedrooms for overflow holiday crowds, and sometimes the overflow also slept on the floor on pallets. The screens on the back porches would be covered with canvas tarps that rolled down to block out the cold and icy weather in the winter. Fat lot of good that did! Of course the rooms would still be cold as all get-out. Grandmother heaped on the covers, but would also heat up a brick, wrap it in a towel, and put it at the foot of the bed. Louise and I would gingerly crawl into bed and cringe and giggle as we warmed up our spot and stuck our feet on that brick. Then after the spot our bodies touched warmed up, we would carefully move a leg, an arm, to another spot and try to warm it up. Sleep came easily after that.
Christmas morning the house was always full of more people and more presents than we would have had if we had stayed in Rosenberg because of aunts and uncles and cousins who still lived in that area coming to Grandmother and Granddaddy’s house. I liked that. I remember Daddy carefully packing all the wrapped gifts from our house so we could open them at Grandmother’s and then pack them all back up to bring right back home. And of course, Santa always found us in Olney instead of Rosenberg.
Grandmother’s kitchen was so small that she could make a 180 degree turn from the counter on her Hoosier cabinet where she had fixed a dish and be right there to put it in the oven of her cast iron stove. Her sink had about a two-foot square space of counter top on one side so we washed pots and pans as she cooked since there was no where else to put them. We always had enough food to feed Coxey’s army, as she was wont to say. Looking back now as I cook with two ovens, a cooktop, a microwave, a dishwasher, and tons of counterspace, I feel like a rank amateur. No, I am a rank amateur.
We did rotate having Christmas at Grandmother’s as well as other relatives’ houses, but our house wasn’t picked that often, so for me Christmas was hitting the road. Looking back on those trips now, just like with Grandmother’s kitchen, I had no idea at the time what Mother and Daddy went through to make Christmas enjoyable for us. Mother asked me one time if it ever bothered me not always being at our own house for the holidays, not opening presents in front of our own tree. I assured her that for me, that  was Christmas, the road trip with Santa at the end. I don’t blame young parents who want to create their own traditions in their own homes; that is as it should be. If the decision is to go to Grandmother’s, the trip might not take as long, and DVD players and iPods now handle the entertainment, but I assure you that wherever your family spends its Christmases, whatever traditions you begin, your kids will just know that is the way Christmas should be. And then some day your kids will make Christmas for their kids, and the cycle will continue.
Merry Christmas, and to borrow a phrase, God bless us Every One! 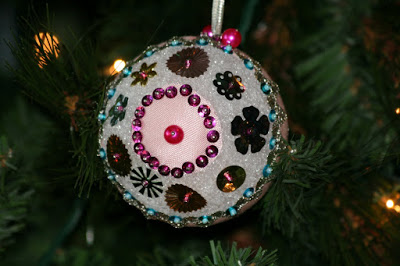 Another Christams tradition begun by my mother and continued here by Maya; the fancy hand-made ornamment. The big, old Stetson hat box Mother stored hers in and the paraffin-covered cardboard box for frozen chicken that I use to store  my ornaments are almost antiques now and a tradition in themselves. I always know which boxes to get down when I want to use those ornaments.