The Get My S— Together Story

Elizabeth Watson was an imposing presence, well over six feet tall with auburn hair. Sort of an Eleanor Roosevelt-looking  kind of woman. She spent 53 years in education, mostly in  Muleshoe, teaching  primarily at the junior high level, and later becoming the curriculum director. She was the curriculum director until the powers that be gave her a promotion and the more impressive-sounding title of Assistant Superintendent for Instruction. They even renamed the junior high in her honor. She contributed much to the students of Muleshoe over the years and dedicated herself to her job. 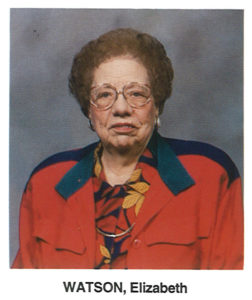 Despite her commanding presence and earnestness of purpose,  Mrs. Watson was probably the most naive, innocent person on the school’s payroll, which worked in our favor when she invited a woman named Toody Bird (really) to speak to us at the first day faculty inservice session one year. Toody Bird was quite the education icon in her Austin circle of influence, where she was then a counselor at Westlake High School. As short as Mrs. Watson was tall, as outspoken as Mrs. Watson was proper, she was most entertaining as she shared with us the wisdom of her experiences. Mrs. Watson could see the woman had much to teach us, but she was apparently unprepared for Toody’s devilish sense of humor and total disregard for worrying about offending someone when she had something to say.
Toody got the ball rolling by telling us that she found a note on a notepad in her motel room that said, “For a good time, call Elizabeth Watson at ….. We all laughed gleefully; Mrs. Watson turned about three shades of red. Then there was Mrs. Bird’s comment about not wanting to go to the doctor because they just scared the hell out of her, which brought more laughter, more red face, and Mrs. Watson’s  frantic glance at the school board members to see how they were taking all of that profanity.  But then came the coup de grace, the story that lived on way past the inservice day.
Seems there was a student who would show up early to school and sit outside Mrs. Bird’s office. She would just sit quietly and pleasantly and then leave when the bell rang. Figuring that she should live up to her title of school counselor, Toody finally asked the girl if she needed something or would like to talk to someone, to which the girl thanked her and said no, she just liked to sit there in the morning before class started so she could, you know.. and at that point she gestured with her hands making the shape of a box. Toody looked at her and frowned, trying to understand. The girl made the box gesture again to no more recognition on Toody’s face. She finally gave up and said, “You know, Miz Bird, get my shit together.”
Mrs. Watson probably had nightmares for years over that. The faculty, however, relived the moment with gusto for years after that by making the box gesture to get the same point across. There are still a few of us around who can read that sign language. And we all have days like that girl when we need just a little time to organize things so we can handle the crap we might have to deal with on any given day. Which was, of course, the purpose of the story: take the time to prepare for the day and be willing to ask questions to really understand what someone is thinking.
Mrs. Watson died in 2002 at the age of 86, but her legacy lives on.