My daddy, God bless him, loved to eat. Of all the good genes he blessed me with, I’m afraid I managed to get that trait. too. But I digress. This story is not about me; it is about him. And banana pudding.
Mother made wonderful banana pudding. Like most cooks, I make things like my mother made them and swear that her recipe for whatever dish is always the best and right way to make it. My family would defend to the death my macaroni and cheese, which naturally, is Mother’s macaroni and cheese. I know this because the other day I tried a macaroni and cheese recipe I found in a magazine and no one would eat it. Really. But there I go digressing again.
Anyway, back to the pudding. As a young bride I made banana pudding for Bill, and it always looked and tasted like Mother’s, but before it was all eaten, the bananas would turn black and the whole thing would get slimy. I finally asked her about it one day. What am I doing wrong? Why do the bananas get black?  To which she smiled and said, “Mine never has time to turn black. It never lasts long enough. Your father eats it all before then.”
So two days ago I made banana pudding. Yesterday it was all gone. Not a black spot in sight. Bill has carried on the tradition well. His mother-in-law would have been pleased and smiled.  His father-in-law would have fought him for the last helping.
Mother’s Banana Pudding (in her own words as she wrote it on the index card)
Mix together
1cup sugar and 3 tbsp. flour-
add to 3 egg yolks-well beaten-
add- 2 cups milk
1 tsp. vanilla
1/4 tsp. salt
cook over low heat til thickened
layer vanilla wafers, bananas and pudding-top with meringue and bake til meringue is lightly brown
The meringue is just like what you would put on a creme pie- three egg whites, three tablespoons sugar sprinkled in while the egg whites are beating, 1/4 teaspoon cream of tartar-also Mother’s recipe. Beat on high speed til stiff peaks are formed. Brown in the oven set at 400 degrees. We think Cool Whip on top of banana pudding is a travesty-yep, not the way Mother always made it.
My tip- I mix the ingredients in my glass mixing bowl and put it in the microwave, cooking for two minutes and stirring for as many times as it takes for it to thicken. Sure beats standing over the stove and possibly letting it burn in the pan. And we never put the pudding in the ice box because we think it tastes better at room temp.  It has never spoiled, and I assure you, even if it you put in the refrigerator, the bananas still turn black if it isn’t eaten soon enough. 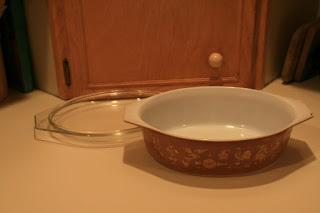 Okay, so if I had been thinking ahead, I would have taken a picture of the pudding. But by the time I had the idea, you guessed it-the pudding was gone. This is the bowl I always use for banana pudding, and macaroni and cheese, for that matter. So we can never have those two dishes at the same meal. Isn’t habit a funny thing?