I needed a phone number for a business in Kingsland the other day, so I picked up the Picayune Area-Wide Phone Book we had brought home with us from the lake, went to the yellow pages under Satellite systems, and Boom, there it was, a listing for the business I wanted. Easy as pie. 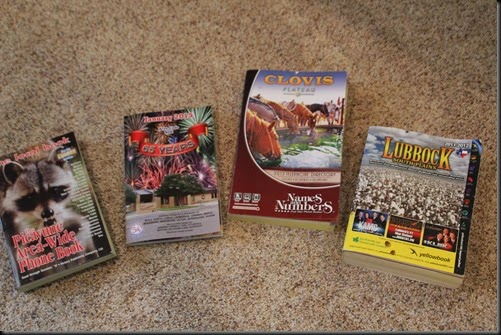 Then just this week as we were driving to Lubbock, Bill needed a number for a person in Muleshoe, so I reached behind the car seat and retrieved a Muleshoe phone book we carry in the car for just such occasions. Turned out the person in question was not listed, so the alternative was to use my relatively newly-acquired iPhone (with which I have a like-hate relationship) and find the number in the white pages on the Internet. This process-which I am sure is easy for those of you younger than I, or those of you who think smart phones are the greatest inventions since sliced bread-oh, wait, even that reference dates me- it took from Sudan to Littlefield to finally find the number in question. Then I couldn’t get out of the white pages to look for something else.

As I said, I haven’t had the phone too long and am still learning and don’t avail myself of its many options because I still find it easier to do things the old-fashioned way, like use a phone book, which is easier and faster. The thing is, while I had that phone book out, I flipped through it and rediscovered the wealth of information phone books contain. Information which people who scoff at the lowly, old-fashioned phone book will never realize is right there at their fingertips ready to be of service without losing one’s patience and gaining a headache in the process. Phone numbers and addresses of the general population and businesses are a given, but if you bother to look, all kinds of listings are included that from time to time will come in handy. Phone numbers and addresses for schools, city, county, state, and federal government offices, government officials, local and national area code maps,  local area street maps, a street index, emergency numbers, hospitals, and other things, all right there for easy access. All you need to know to use the phone book is the alphabet, and I know you know the alphabet to use your smart phone. What you don’t have to know is all the tricks and steps and icons and crap, not to mention being in a strong service area, to make the fancy phone work.

The problem with phone books now is that as the world goes to cell phones, not all phone numbers are listed in the old phone books, and that’s the catch. I don’t know this for sure, but I am guessing that cell phone numbers can all be found on the Internet, so that’s where people now look for all numbers, foregoing the tried and true paper phone book. And I know the city street maps in phone books can be ignored in favor of Google maps, but looking at a map on a small cell phone screen is just not as effective as seeing the area in question on a bigger map. And Google maps don’t always show you what you need to see anyway.

So let’s say you become frustrated with your elected officials and wish to register a complaint. Don’t use the lame excuse that you don’t know how to get hold of them, or don’t even know who they are- and yes, I know some of you don’t-all you have to do is pick up a real phone book, look under the table of contents, find your person under Government Officials, and make that call. And while you have the book out and open, take the time to look through it and be amazed and surprised at all the information you never knew was there.