After she finished the series, Maya insisted I read The Maze Runner trilogy, which I did, so when the movie came out on September 19th, I thought it appropriate that we see it together. I couldn’t get down there on the opening week-end, and I knew she would want to be first, or maybe second, in line to see it with one of her friends anyway, which was understandable. But she graciously and eagerly agreed to see it a second time with me. And why not? She enjoyed the books and what teenage girl (well, almost teenage) wouldn’t be willing to watch Dylan O’Brien race through the maze again for another two hours? So the date was set; I drove down for our big night out to discover that brother Ben had decided to play soccer and had his first practice and game that same week-end. So I got two grandkid events for the price of one trip-a soccer game and a movie. What a deal! And pizza. But that came later. Ben’s practice Friday evening went well, but a trip to the store was in order before the game at noon on Saturday, and that’s when I had my first taste of being a soccer mom, AJ and Caroline and Colten  being into the smaller ball sports when they were that age. I know about baseball and softball cleats, gloves, and balls. Shin guards, soccer socks, and soccer cleats were a whole new experience. How hard could it be, buying socks? Harder than you might think, especially when shopping with Ben! Shin guards weren’t that simple, either. And for a while, the only shoes we could find were in girl colors, but the right pair finally surfaced. So then we rushed back to the house to load up chairs, blankets, and edibles and made our way under a puffy gray sky to the soccer fields. Ben’s game was at 12:45, so when we arrived other games were under way already. Little soccer players were in constant motion all over the place, using up excess energy waiting impatiently for their games to start while the kids in the ongoing games were scurrying about chasing the ball and kicking each other in the shin guards. Not hard, but moms, I suspect, were glad they had gone to the trouble to provide them. 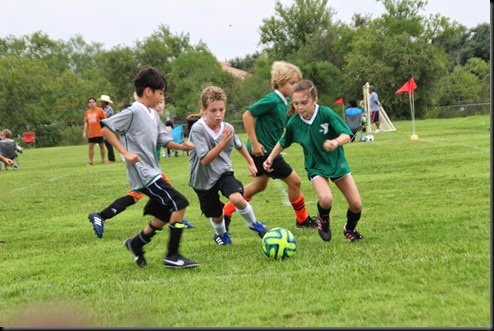 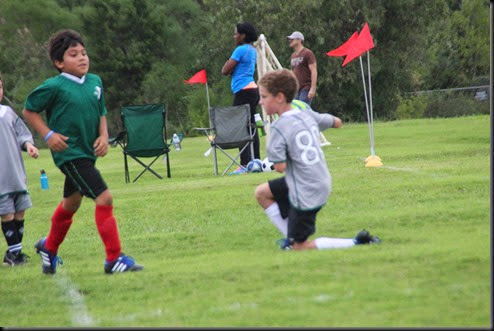 Ben went in as a forward, I think was the position, and did well, but the coach put him in as goalie after the other team racked up 3 points, and he did a really good job stopping more scoring, but alas, the damage was already done, and they lost. But it was the first game. They will get better. 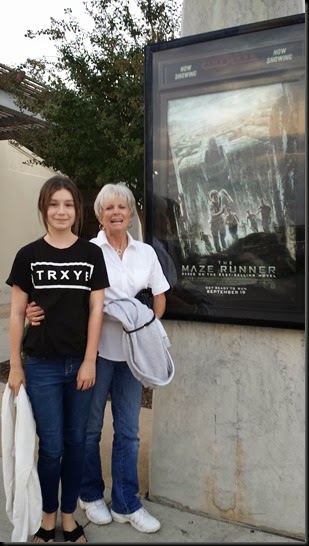 After a little rest, it was time to load up again for the original main event of the week-end, The Maze Runner. i expected the audience to be young people, but it seemed like there were as many adults as kids there. So our group fit right in- mom, grandmother, 12 year-old, 9 year-old. We had all the bases covered. For those of you not into the current blitz of YA dystopia novels, this story is about a group of boys who are saddled with the task of figuring out how to get out of this maze and why they are there in the first place. And that’s just the first conundrum they have to deal with. When the second installment, The Scorch Trials, comes out, another road trip to see it will be in order. But back to this movie-no sooner would these kids manage to figure out how to overcome one overwhelming obstacle when another one would magically appear. I was worn out by the ending, which of course, left us all dangling and anxious to see how the group deals with a new set of never-ending adversities in the next movie. I was so caught up in the story that when Chuck (spoiler alert) dies, I really did shed a few tears. Loaded down with pizza, we compared the book to the movie and shared favorite scenes on the way home. And just before we reached the house,  Ben calmly showed us the tooth that just then decided to come out! 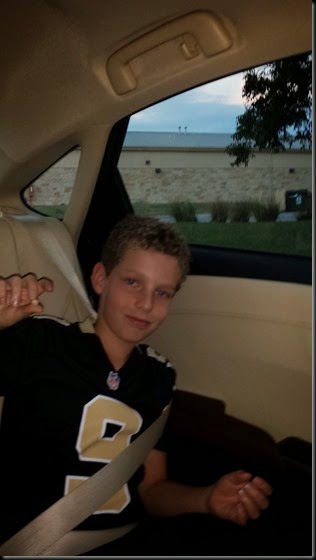 A fun ending to a memorable day. Can’t wait to do it again.