We Did the New York Tourist Stops, Too

The Lion King was the main event, but we managed to squeeze in a few more stops as well. Let’s see… We began our first full day with a ride on the New York subway; that’s Erin in the green top with the family in front of her. 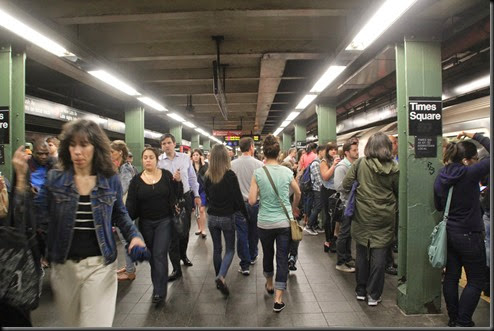 to  the 9/11 Memorial and Museum, a sobering experience. 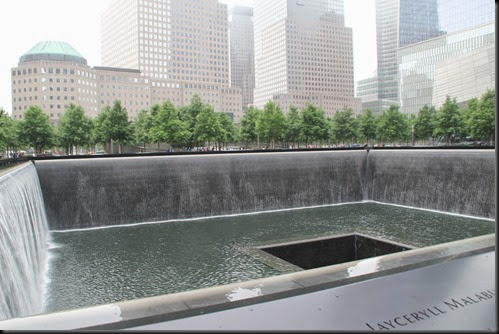 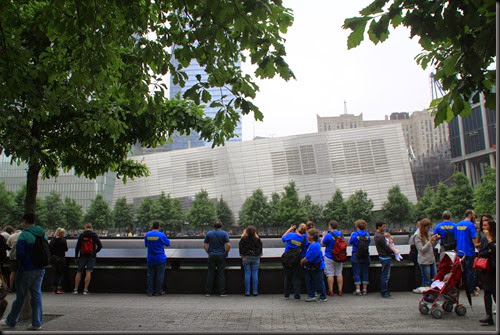 The museum is the slanted building behind that line of trees. The people are standing around the waterfalls of the memorial. Next stop was the view from The Top of the Rock. 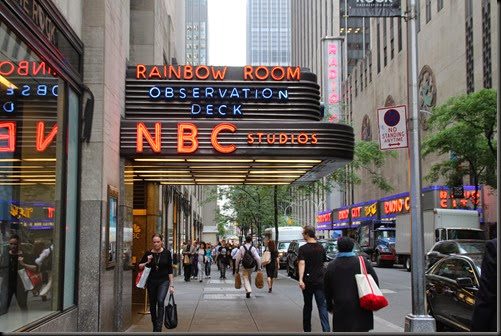 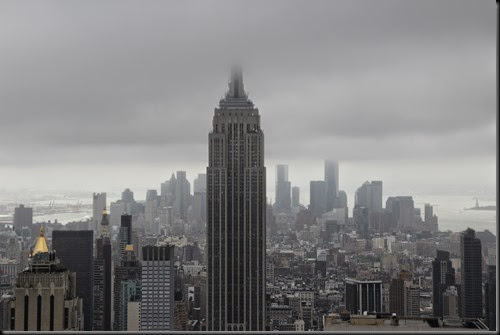 As you can see, it was overcast that day. Look closely at the water to the right and you can make out the Statue of Liberty. Supper was at Bubba Gump’s where we all filled up on shrimp. 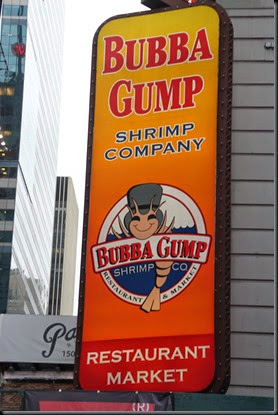 The next day was the trip to the Statue of Liberty and Ellis Island. It rained all morning, but the umbrella street vendors magically appeared and we were covered. 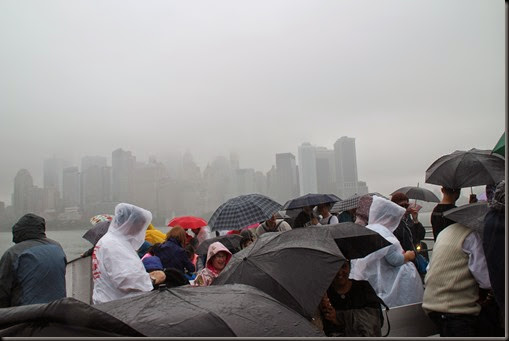 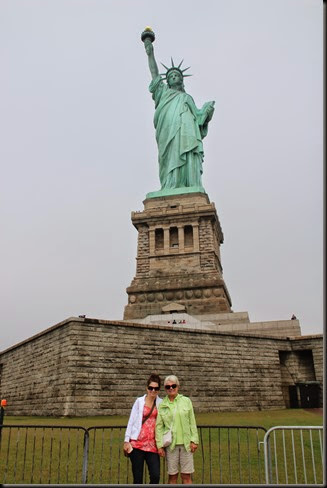 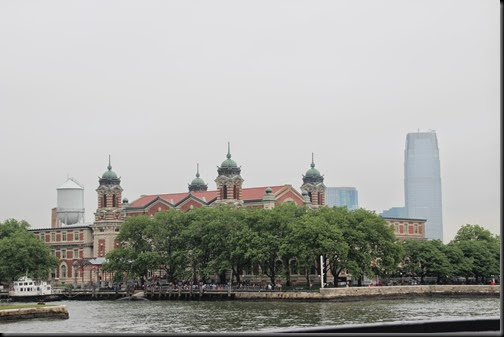 After returning from Ellis Island, we took in the Indian Museum, which was right there, 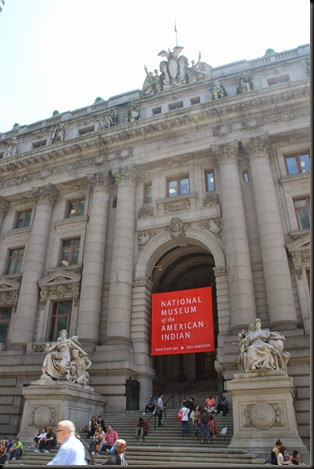 and discovered that the Jewish Heritage Museum was within easy walking distance, so we did that, too. There wasn’t much of distinction to the front of that building, but this shaded pathway leading to it was lovely. 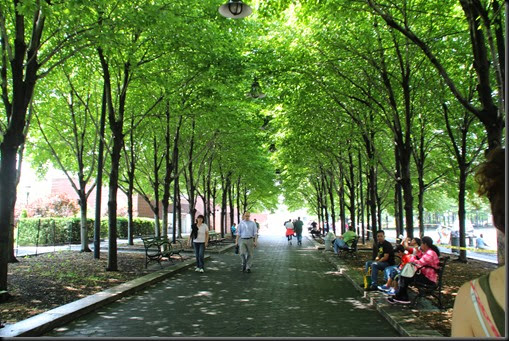 AJ had heard about Katz’s Deli, a landmark deli with the claim to fame that the infamous scene from When Harry Met Sally was shot there, so we had lunch there, sampling typical New York deli pastrami and Ruben sandwiches. 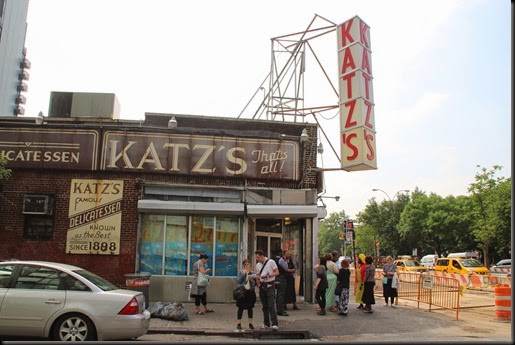 This was the night for our Broadway musical, so we dressed and only had to walk across the street from the hotel to see The Lion King. 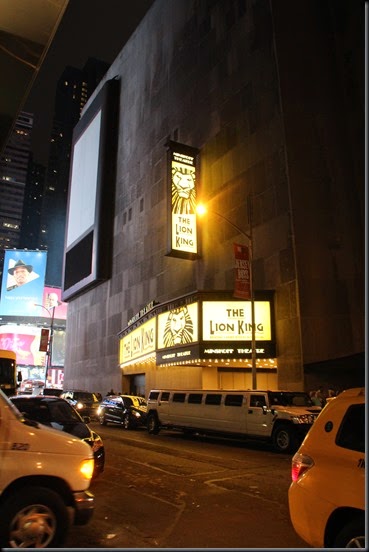 The next day was more museums. First stop was the Museum of Modern Art, specifically for Maya to see Van Gogh’s “Starry Night.” It was a neat experience to see it person and not the page of an art book. 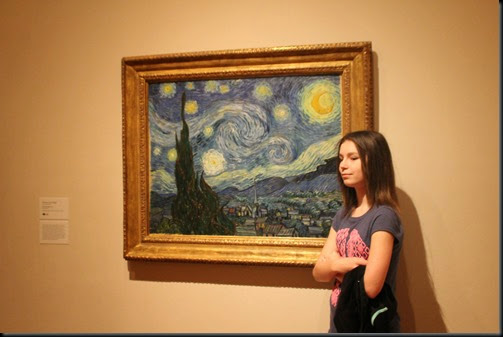 Then it was on to the Museum of Natural History for Ben and the dinosaurs; the kid in all of us liked that. I found the evolution of the horse and the Mastodons and Mammoths especially interesting. 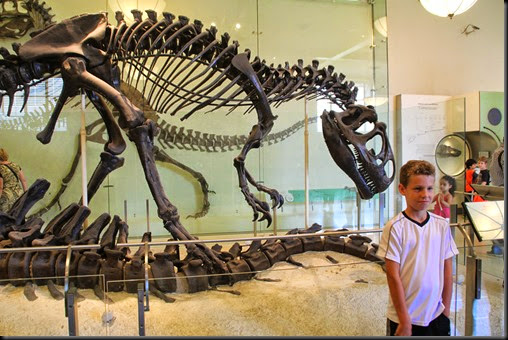 Central Park was across the street from the Museum of Natural History, but no one but me was too interested in that. AJ said a park is a park. 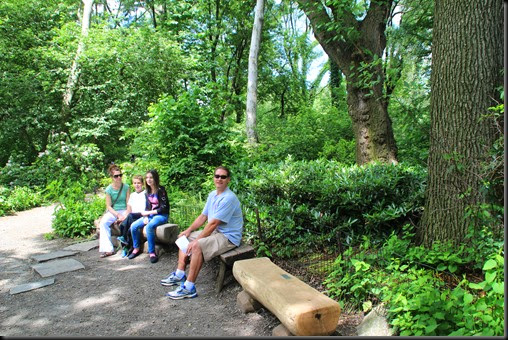 We found a taxi driver who was willing to take all five of us to the Circle Line cruise tour. Be prepared; by law only four are allowed in a taxi, but if one of the passengers is seven or younger and small enough to sit in one of the adult’s laps or squeeze into the back seat, some of the drivers will allow it. So we had the taxi experience.No Cash Cab, however. We did enjoy the boat tour. The view of the city from the water is a nice contrast to being on the streets with all the big buildings. 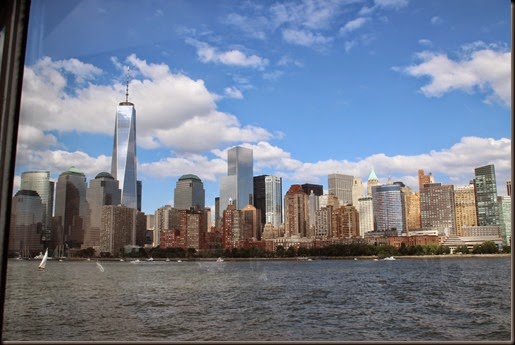 The decision had been made to take in the Empire State Building at night since we had seen the city from above during the day at the Top of the Rock. Not a good decision, as everyone else seemed to have the same idea. After at least an hour and a half of waiting in line, one of the ushers came forward and announced, “If you want to walk the last six flights of stairs to the top, go this way; if you want to wait another 30 minutes to ride the elevator, go this way.’ Well, Ben had had enough, and he made the decision for us. He groaned and announced,. “Well, I’m not waiting another 30 minutes.’ and headed for the stairs. We all fell in and followed him up the stairs. And it really wasn’t that bad. What was bad was the cold wind and the wad of people to wade through when we got to the top. But it was beautiful. We did get to ride the elevator all the way down. 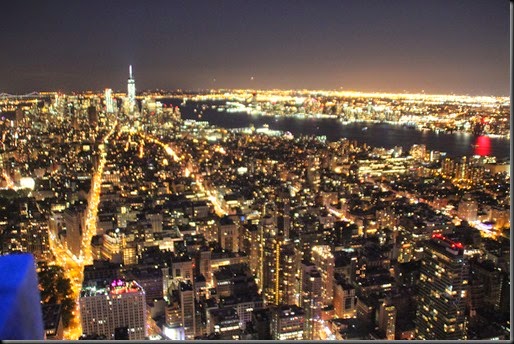 The next morning it was time to go home. On the shuttle to LaGuardia as we stopped to pick up others going to the airport, one family turned out to be from San Angelo, Texas. Small world syndrome at its finest! LaGuardia is in Brooklyn, a totally different kind of city compared to New York. And this is where we actually saw gas stations, which you just don’t have in Manhattan. All those cars and no gas stations, an odd situation for Texans to understand. 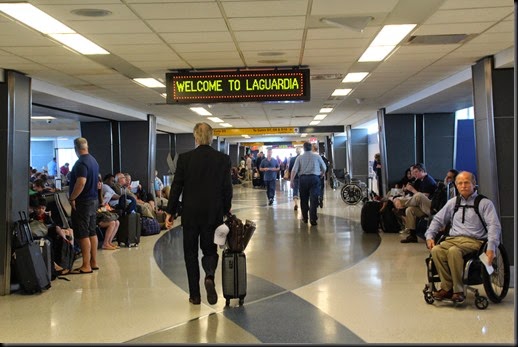 After a quick change of planes in Dallas, we were back in Austin; didn’t even lose any luggage. It was obvious we were in Austin by the guitar decorations at the baggage claim area, a nod to the SXSW music scene, no doubt. 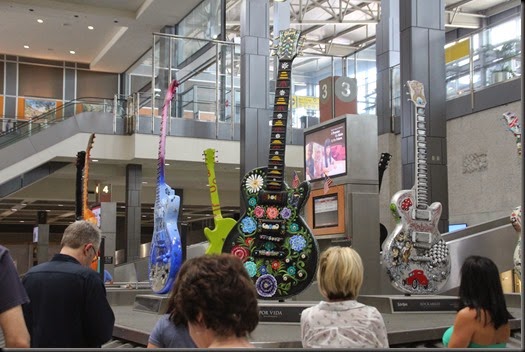 it was quite a trip. We may have played the tourist card that some travelers find a cliché, but for us it worked. We can do some of the other things on the next visit. Road trip, anyone?