The Lion King: Shock and Awe 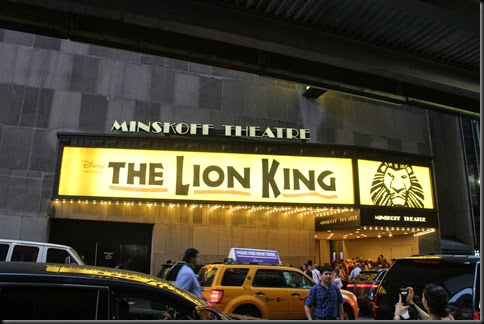 Based on my favorite words of wisdom-Only put off until tomorrow that which you are willing to die having left undone-I made the executive decision to travel to New York to see the Broadway production of The Lion King before its run was over. I wanted to take the whole family, but for a variety of reasons it was AJ, Erin, Maya, and Ben who made the trip with me this go-round. We made all the tourist stops while in New York, but that’s another story. The Lion King was the main topic. 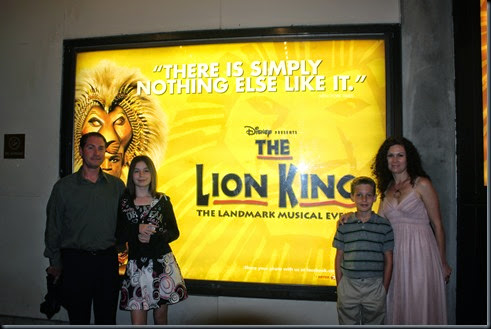 A night at the theatre deserves going to the trouble to shuck the shorts and T-shirts and dressing up for the occasion, which we did. 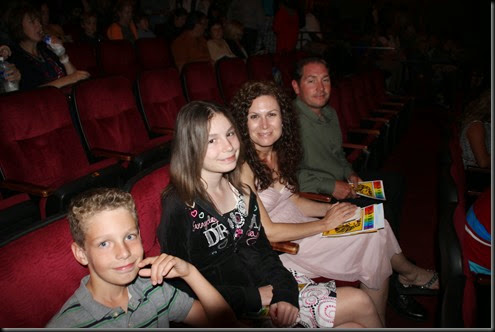 We had good seats and were anxious for the show to get started. Not the best picture of AJ, but hey, three out of four’s not bad. 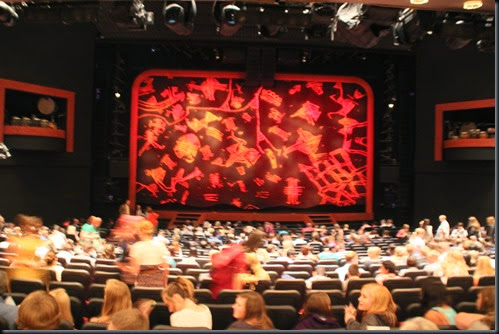 The curtain was decorated with symbols that appeared in several scenes as the play progressed. Notice the alcoves on either side which contained drums and other instruments used for rhythm and special musical effects. 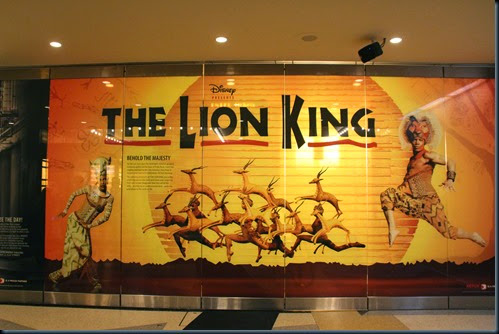 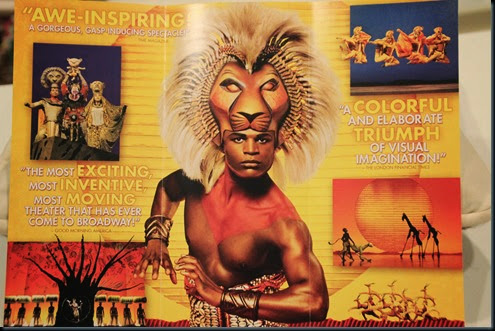 Of course, no photographs were allowed after the curtain rose, but this sign and ticket brochure below do show some of the costumes and animal props that were very effective. People with masks and appropriate costumes inhabit the bodies of the animals. Zazu, the bird who is Mafusa’s right-hand man, is actually a hand puppet held by the actor dressed in a dark blue-green body suit; the eye sees him but the brain ignores him and the bird is real. The mind over matter effect was amazing and the whole thing worked beautifully. No one cared that the people portraying the animals were not completely camouflaged; the animals came to life. If I had tried to take pictures of all this during the performance, I would have missed the performance! It was more important to live the moment and become engrossed in the action.

And what a performance. Just as in the original animated movie version, the opening number is the show-stopper. As Rafiki is singing The Circle of Life, animals are making their way to the stage by coming down both aisles. I watched Ben, who was sitting next to me, as he watched in fascination the animals to our right, but as I saw an almost full-size elephant in the aisle to our left, I motioned for him to look that direction. In disbelief, his eyes opened wide, his mouth dropped at the sight, and that eight year-old stood up and leaned over to get a better look. Shock and awe. Made the whole trip worth it. And just like in the movie, when the baby Simba is presented to the animal kingdom, a cliff magically rises from the center of the stage, and the final lyrics are sung, —the circle of life—followed by that final note-BOOM!, it takes a few seconds for the audience to catch its breath, and then pandemonium breaks loose with resounding applause. Shock and awe. 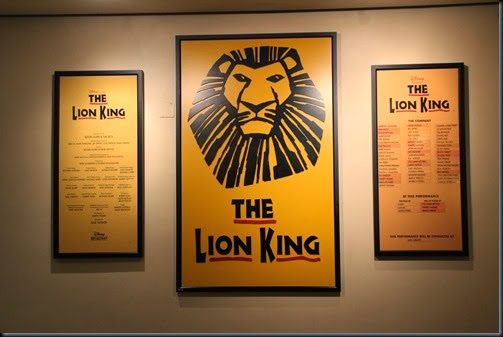 I have always been a fan of the story and the music of The Lion King. I enjoyed the movie soundtrack so much that I also bought the Rhythm of the Pride Lands CD, and some of that music was added to the Broadway production. So it should be no surprise that I bought the musical’s soundtrack as my main souvenir. Well, that and a couple of T-shirts, a poster, and some tote bags… There are certain scenes that hold special meaning for me. When Pumbaa, Timon, and the young Simba are singing Hakuna Matata and we see a representation of Simba growing up, that strikes a special memory with me as I think of my children growing up as I watched and wished they could stay young forever. The scene of Mafusa appearing in the sky to the lonesome adult Simba is special to me as well. The opening number when baby Simba is presented sets the tone of the whole play for me. I love it all. But it’s the music that gathers all my emotions, puts them in my heart that swells to the point of bursting, and the only release is in the tears that flow uncontrollably as the music affects my whole being. The only other person I know for whom music has that effect is my mother, God love her. I am so glad she bequeathed that gift to me. Music is special. She would have loved The Lion King. I listened to the CD nonstop as I drove from home from Austin after we came back to Texas. I haven’t been able to get the music out of my head. And that’s okay. If you have only chance to see a Broadway musical, this is the one you need to see. But don’t wait too late. Some day it will indeed be gone. And what a shame that would be for you to miss it.