Old People on the Loose Again 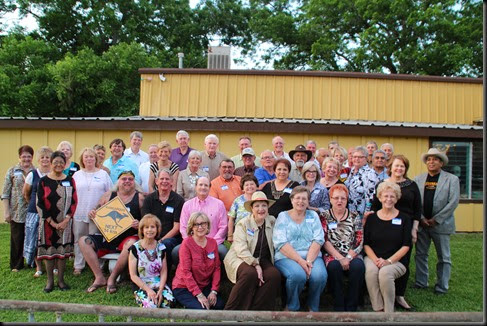 Fifty years and a thousand summers ago, my class of ‘64 graduated from Lamar Consolidated in Rosenberg, Texas. On May 17th we did the reunion routine again, but just our class this time (“I Saw Old People!” August 14, 2012). No Triumphs, no BJ, no extra people; just us. And that’s okay. I suspect at all class reunions people fall into three categories: those who always try to attend, those who never attend, and those who finally show up. This reunion was no different and all three groups were represented. Those of us who tend to always come were in force, those who never show were once again invisible, and the seldom seen were greeted with open arms and smiles. 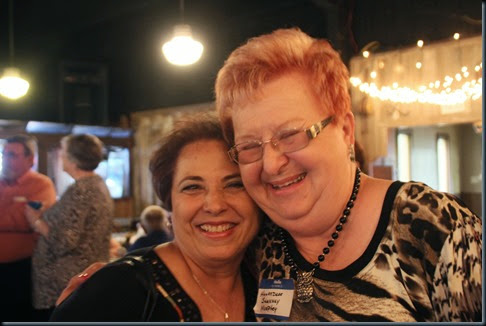 Shirley French, one of the former no-shows, reconnected with old friend Howardene Sweeney. 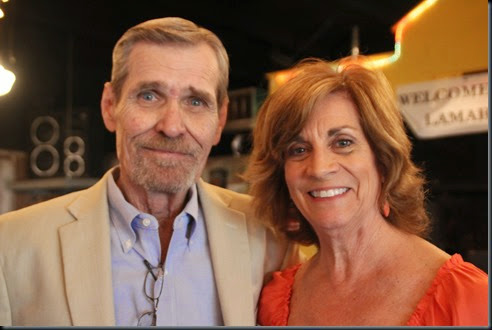 Kenneth Bettin is one of those who, I think, made one of the early reunions but hasn’t been in forever. And don’t get excited-that is not his date or wife. That is my friend Jenice Williamson from Muleshoe who moved to Houston and with whom I stayed over the weekend and agreed to get me to and from the Swingin’ Door since my husband Bill was unable to go this year. And just for the record, she is not a ‘64 graduate from her school in Ganado. I’ll bet you can tell she a few years to catch up with us! 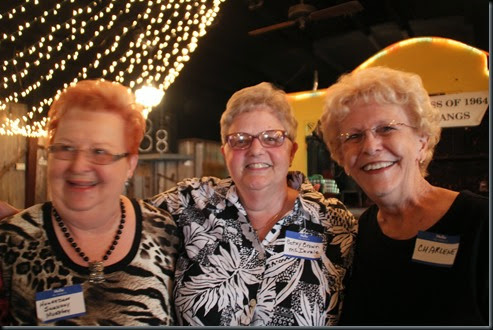 Betsy Brown McInvale, center, pictured with Howardeen Sweeny Murphey and Charlene Stehle Kulhanek is one from the finally came group that I was glad to see and visit with. 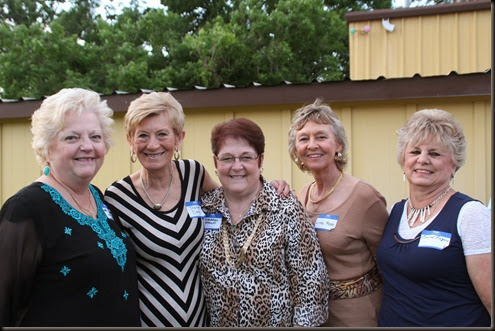 Annette Wittneben Warmke, Jeanette Macik Drew, and Linda Schiller have made most reunions, but Cherrell Wooley, center, and Bonita Rogers were new to the reunion scene. 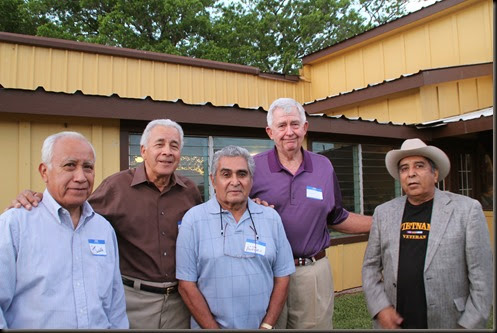 Ronnie Harper in the purple shirt has made several reunions, but I am not sure about Joe Caudillo, Gregory Rios, Jesse Rodriguez, and Andrew Mata, and rather than leave someone out, here they are! And I suspect I missed a few folks, like Gloria Perez, who is in the group shot. But you know, I am getting old and slower on the uptake, so if I missed you, I am sorry. One group I failed to mention were those who had died since the last reunion, and I was sorry to hear of their passing. Out of 180 graduates, we have lost 24 classmates. And just to set the record straight, word had come down that Barton Wood had died; apparently, just like Mark Twain once said, reports of his demise were greatly exaggerated, or something like that. And there may be others who aren’t on the list who should be and others perhaps on the list who are still with us. Keeping up with that list must be one of the harder aspects of reunion planning, so I hope no one gets their feelings hurt over a possible mistake. 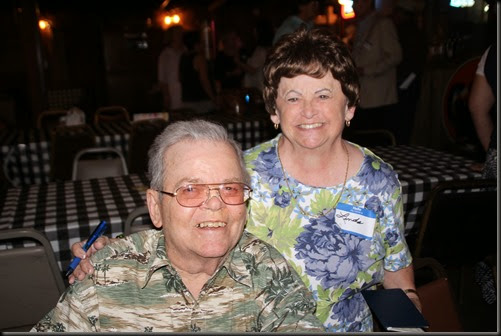 We have Linda Owens Carroll and her husband Ed, who is not one of our classmates but faithfully attends and helps Linda with the details, and Danny Gerkin, pictured below, for making these reunions happen all these years and keeping up with all those lists and addresses. I am sure they are weary of contacting everyone and making executive decisions about where and when to have the reunions. These parties don’t magically appear without lots of work, and they deserve our thanks and recognition for their willingness to tackle the job. Thanks, guys. 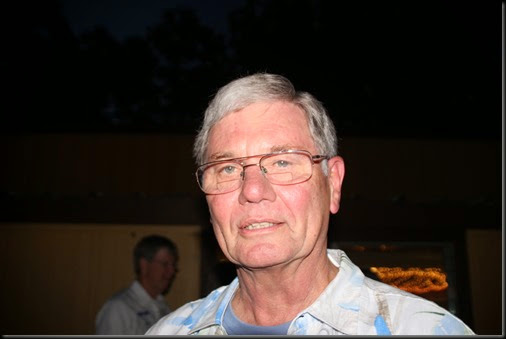 Looking back over my pictures from the evening, I realized I failed to subject everyone to blinding camera flashes or interrupting their conversations for yet another picture. I apologize; I certainly didn’t want to leave anyone out, but I do think everyone gathered for the group shot. All but Sharon Vallet Wallingford who had to come late and missed the group shot. I will add those that I did take to the scrapbook and will bring it again to share with those who care to look. Getting everyone outside and lined up was a mess. I am trying to remember if we took instructions any better when we were students! Some people in the very back just barely show up. I can tell who they are and they know who they are, but the casual observer won’t have a clue. Oh, well. It is what it is. We’ll do better next time. But it was nice to take the picture outside. The weather was nice and the lack of indoor noise made it easier for those of us losing our hearing (me!) to carry on a conversation. How many more class reunions should we expect? I don’t know how that works. The older we get, the fewer of us there will be; the older we get, the fewer of us will be inclined or able to travel to a reunion; the older we get, will we even care? I can’t answer those questions, not having been in that position before. I do know that friendships are a valuable part of our lives, even those we keep alive only at reunions. I always enjoy seeing everyone, even if that is the only time I ever see them. So whether it is next year for another all 60s, which is in the planning stages, or in 2018 or 2022 for just our class, I will be there, scrapbook in one hand, camera in the other, and happy to see those who manage to show up. See you then.