My dear husband has embarked on a new project, a pecan grove. It has been an item on his bucket list for a long time, but something that always lost out to priorities like making a living, raising kids, sending them to college, paying bills, taking care of business, doing the things that responsible fathers/husbands worry about taking care of first. We may not live to see the first harvest, but doing what you want is one reason to retire, right? And West Texas can always use more trees. So why not? 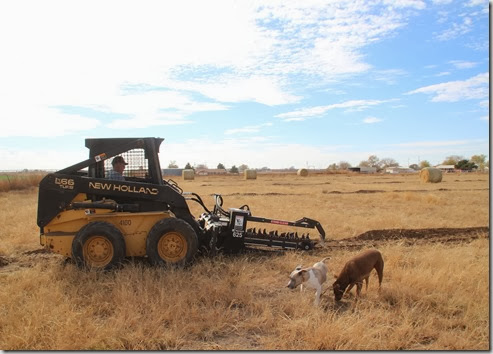 But also, trees in West Texas need water, which means the first step is digging ditches to lay pipe for the water line. And the pipe has to be buried so the pesky jackrabbits and cottontails won’t chew it up, which we have learned the hard way they love to do. They make confetti out of black plastic pipe that many people use on top of the ground, so Bill is using buried PVC pipe. Bill borrowed son-in-law Neil’s skid loader with a digging attachment and went to work. After he marked off where the ditches were to go, Mari, Porche, and I were enlisted to help. Our job was to keep a running measurement of the depth of the ditch and to try to help Bill dig in a straight line. 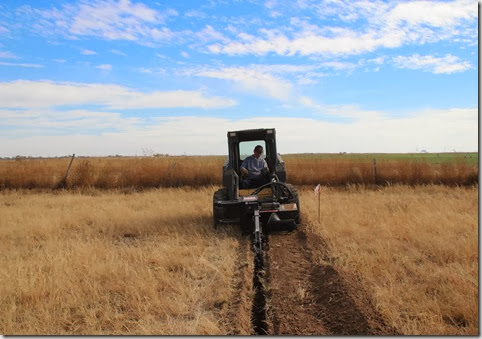 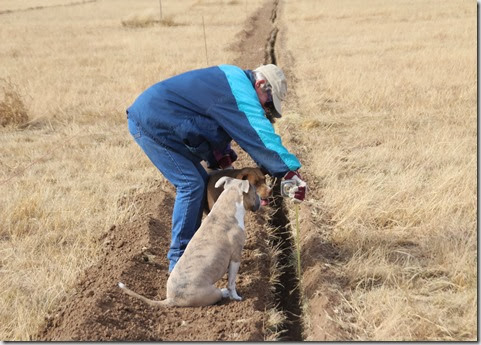 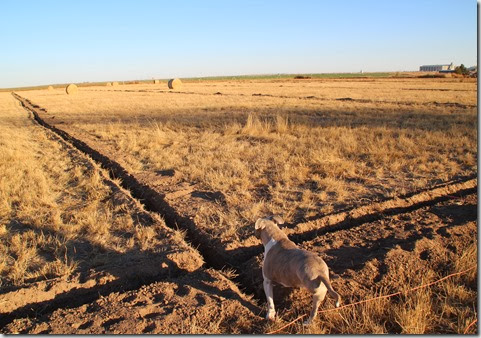 And that’s where a new appreciation for construction workers and heavy equipment operators was acquired. I realize the pros have larger, heavier machines whose weight helps keep them on a steady course and they have gizmos that help them with depth and direction, but I guarantee even then, it’s still not that easy. Bill ran heavy equipment as a teenager when he worked for his Uncle Stanley building bridges in Oklahoma and Arkansas, but that was a lifetime ago, and a new learning curve was in order. The first ditch took us more than an hour and forty-five minutes; the second one an hour and a half; the third an hour fifteen; the fourth an hour ten minutes; the fifth an hour five minutes; and the last one, which was almost straight, an hour, period. 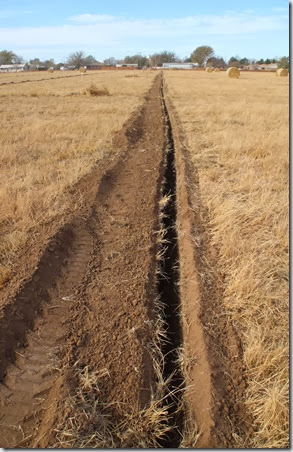 The last ditch. A pretty straight line, I must say! The ground was uneven, the machine would get hijacked by wads of grass, dirt,  and dry stems of careless weed that were just nearly as big around as a Coke can. I kid you not. So overall I think we did pretty well, thank you very much. The depth went from 12 inches to 19 and all depths in between, but the pipeline can still be laid. 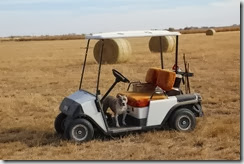 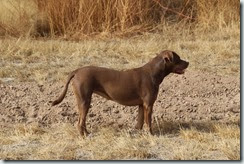 We used the golf cart to go back and forth to the house, and Mari took advantage of the ride sometimes as she is still working on her stamina and strength even after rehab. Porche, on the other hand, won’t ride in the cart and covers many miles with her long easy stride. So the next time you look down your nose at construction workers, I challenge you to do their jobs. I don’t know what we would do without them. It is a dirty, dusty, unappreciated job that requires more skill than you realize. Bill  is starting out with 50 seedlings, and updates will be forthcoming. But for now when you see a construction worker, don’t think of them as unskilled manual labor. I assure you there is more to it that meets the eye. Good job, guys.