Oh, The Fun We Had! More Tales From School

I came across a picture from a faculty Christmas party the other day and just had to share it. I believe this would have been our 1995 party and gift exchange. Linda Marr was our high school counselor who would draw names out of a box to match us with a person to give a gift to. No doubt this year she rigged the drawing so she would get Shari Jenkins’ name, because she had the perfect gift in mind; not necessarily the best gift for Shari, but the best gift with which to  pay homage to Mr. Jenkins, who just happened to be not only Shari’s husband but also our good-natured assistant principal, and keep the whole faculty entertained at the same time. And by now your eye has already been drawn down and is riveted to the poster below. I’m not sure if it was the word SEX that grabbed your attention or the pretty-much naked man, but this was the poster the unsuspecting Mrs. Jenkins unwrapped, and to our delight and Mr. Jenkins’ chagrin, shared with us all. Needless to say, it was the most inspired and most popular gift of the evening. 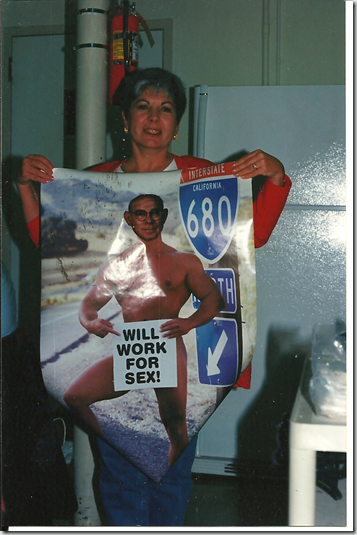 The story unfolded that Linda had seen the poster much earlier in the school year, and the wheels started turning. She took a picture I had taken of Mr. Jenkins, had it enlarged to the appropriate size, and superimposed it on the poster. This was before the digital/Photo Shop days, way back last century, remember,  but the end result was very effective. Mrs. Marr could get away with a prank like this only because we were blessed with two quality bosses, principal Al Bishop, who could appreciate a good joke,  and an assistant principal like Mr. Jenkins, who was not without his own brand of humor at our faculty meetings, and who, when he later became principal, was one of those special bosses who could create a working  environment that allowed for this sort of fun while running an effective, successful school. The kids appreciated his sense of humor and felt comfortable around him, but respected him and knew he meant business when it came to their proper behavior and education.

Linda was always thinking up devious little jokes to pull. Mr. Jenkins was not her only victim. This picture reminded me of one time when I was her target. it was right about this same year, maybe ‘94 or ‘96, when I was blessed with a student aide one period of the day, which happened to be the period before lunch. One of the best meals our cafeteria served was their Thanksgiving and Christmas turkey and dressing dinners, and I usually enjoyed their cooking on those days instead of my lunch from home. So this year I sent my student aide, Josie Cortez,  to get my tray and take it to the teacher’s workroom where many of us ate lunch. She did, and when the bell rang, I went down, looking forward to this meal. Several of us were enjoying the holiday treat when I realized  what I bit down on was not just dressing. I spit it out on my fork and discovered a plastic cricket. I set the cricket to the side, we all laughed, and with a little hesitation and a smile, I took another bite. Things went well until I had another surprise in the mashed potatoes. And the green beans, And again in the dressing. Not one to let a little plastic insect ruin my lunch,  the rest of the meal was a treasure hunt to see what else I would find. Six crickets later the tray was empty, my tummy was full, and I had not keeled over dead from eating after these little uninvited critters. I wasn’t about to let the perpetrator of this little crime get away with spoiling my meal. No sir. I suffered no ill effects, we all had a good laugh, and I finally squeezed the truth out of Josie, who of course had been sworn to secrecy not to tell me that Mrs. Marr had caught her on her way to the cafeteria and convinced her to stop on the way back for the planting of the crickets. Obviously Mrs. Marr must have had just too much time on her hands. I never could think up anything to get back at her. But it is always fun to retell the story.  Several of the crickets lived in my desk drawer for years as a friendly reminder.

And this last story has nothing to do with Mrs. Marr, but remembering that story made me think of one more concerning dear Mr. Gulley. On one of the many One Act Play trips to state with Mr. Gulley and  Dr. Kerry  Moore, then just Mr. Moore, the Texas Café, (I believe was the name, it’s been long enough that I may have forgotten exactly), was a fairly new and  popular restaurant in Austin, and they took the kids there one night for a meal. So the week after the group’s return from the trip, someone came into the workroom one morning before classes started and made a casual comment to Mr. Gulley about liking the Texas Café, to which Mr. Gulley inquired why he would say that, and the teacher said, well, the bumper sticker on your car says you like it. Mr. Gulley responded that he didn’t do bumper stickers, and the teacher assured him that yes, he did, because the one on his car said “Texas Café-Bubba Likes It!,” immediately after which Mr. Gulley quietly and purposefully rose from his chair, walked out the door and disappeared. In a minute, he was back with a serious face and on a mission to get that pesky bumper sticker off his car. Which he did, but in its place he earned the nickname “Bubba,” which we thoroughly enjoyed calling him in front of the kids, down the hall, whenever we could catch him in a crowd. And if you know Mr. Gulley, you know he is about as much of a Bubba as Queen Elizabeth is a Lady Gaga. But he took it like a trooper and eventually, being  the good ol’ boy he is, begrudgingly acknowledged the greeting  every time he heard a gleeful Bubba! directed his way. Truth be told, I think he kind of liked having a nickname. Or not…

Oh, my, but we did make some memories.