Today marks the end of week one after Mari’s trip to Aggieland and the Texas A&M vet school where she received top of the line orthopedic surgery to repair the ACL and meniscus in her one hind leg that was about to go out on her. And this begins week two of our new job as home health care nurses for the next two and a half months, while her TPLO surgery heals and she regains full use of that leg. 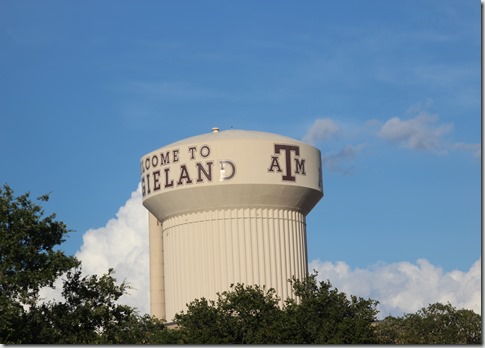 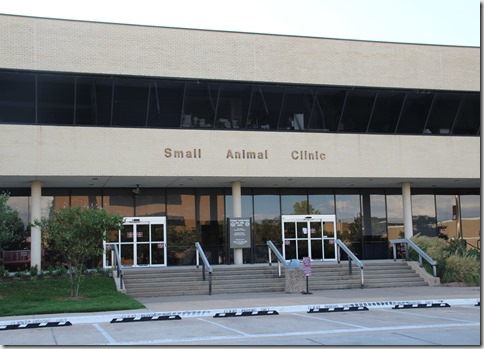 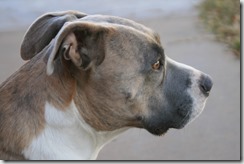 You might remember Mari, the three-legged Staffordshire bull terrier that Colten brought home one day to live with us. Over the past year or so we noticed she was not jumping up on the bed any more. Yes, she is allowed on the bed. Your dog isn’t? We just teased her about putting on too much weight. Then she couldn’t handle simple little steps, like the one connecting the back patio into the garage or the single step up to the front door. She would hold herself up with her strong front torso and front legs and then gingerly pull her one hind leg and her tail end up under herself when she sat down. Just lots of little things told us she was losing the use of that one back leg, so off to the vet we went. 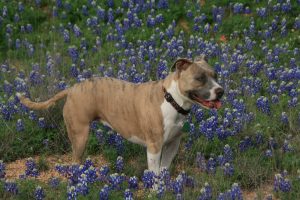 The hip was suspected, but it turned out to be the ACL ligament in her knee that was the problem. Our vets here recommended taking her to a specialist, a certified orthopedic veterinary surgeon for the best treatment, and being the good Aggies that we and most of the vets at Muleshoe Animal Clinic are, it was decided that we should take her straight to the source and get it done right. So we did. The referral was made, the appointment was set, and off we went.

We drove down on Tuesday, had the consultation and examination with Dr. Brian Saunders and intern Kelly Oberschelp on Wednesday, and they did surgery on Thursday. Because we were also making the trip down there to attend our son AJ’s Master’s degree commencement exercises on Saturday (read about that next week), we decided for Mari’s best post-op and recovery we would leave her there through the weekend so she would be under their care and supervision and pick her up on Monday morning. That was a good decision and gave her a good start on her recovery.

This is what they did. After repairing and cleaning up her torn ACL, anterior cruciate ligament, just like those fixed on human athletes,  and cleaning up the torn meniscus, Dr. Saunders performed a surgery is called TPLO, tibial plateau leveling osteotomy. I won’t attempt to explain it to you, and if you are interested, I know you will Google it anyway, but suffice it say, it creates a more stable knee for the repaired ACL and meniscus by cutting some bone and inserting a metal plate to hold everything together. 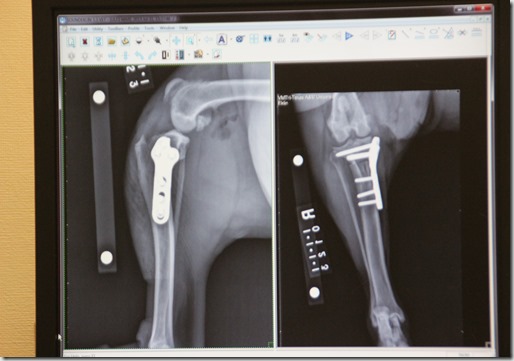 Kelly called every day with a progress report, I think four times on surgery day, to keep us informed on Mari’s condition, and we really appreciated that. I think it was on Saturday when Kelly reported that she was doing well, but had been naughty and figured out how to pull off the soft protective e-collar put on to keep her from licking her incision, so they gave her  two collars, the soft one and a plastic one. We told them she was real smart, so I guess Mari thought she should prove it. 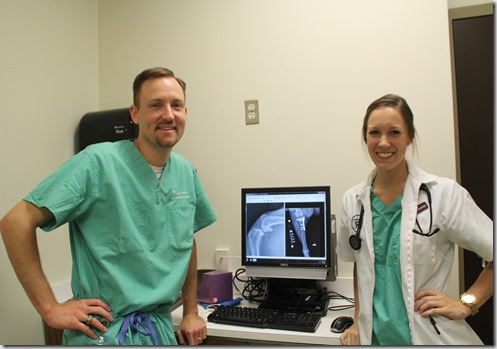 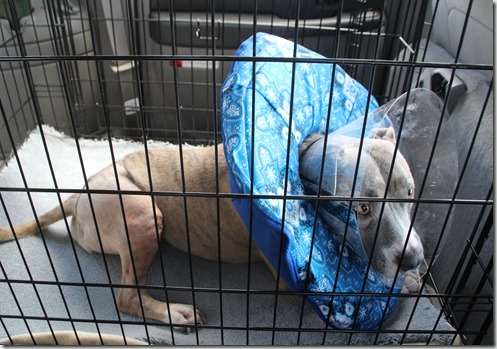 Here she is on the way home wearing both her collars. It was a 9-hour trip, but the mild sedative they provided helped her relax. Dr. Saunders told us Staffordshire bull terriers are genetically prone to this breakdown in their knees, even dogs with four legs, but that Mari’s recovery would be a little trickier because of having to put all her weight on the surgery-repaired single back leg. So our lives are now devoted to helping her recover successfully, which requires staying in her kennel the whole time and having only supervised short walks for the next 11-12 weeks. And she has to wear the collars or be closely supervised for the first two weeks to keep from licking the incision until it heals. Which means that she is getting pretty much round-the-clock attention while everything else just has to wait

Like the three-foot weeds taking the place from the much-needed rain we have had lately. The good news is that it did rain; the bad news is that the weeds loved it as much as the trees, grass, and crops. I haven’t bothered to vacuum or worry about much housework, either,  but I will eventually. We are trading off sitting with her and letting her out of the kennel in the back room with the door closed so she can’t take off down the hall. And I think she is beginning to take advantage of the short bathroom trips outside because she won’t go to the bathroom until she just has to which means she can stay outside just a little bit longer. Told you she was real smart.

The vets at Muleshoe Animal Clinic, in whom I have complete confidence-even those not Aggies!- will check her progress so we don’t have to make that long trip back to College Station, and that will make part of the process a little easier. But still, it’s going to be a long 12 weeks.

So it comes down to this: The surgery? Somewhat expensive. The rehab time? Seemingly forever.

Use of the leg again to run and play? Priceless. 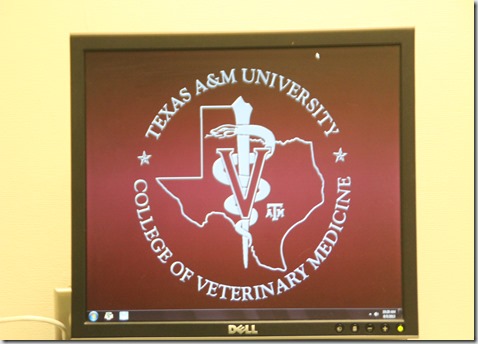