Muleshoe Does Relay For Life 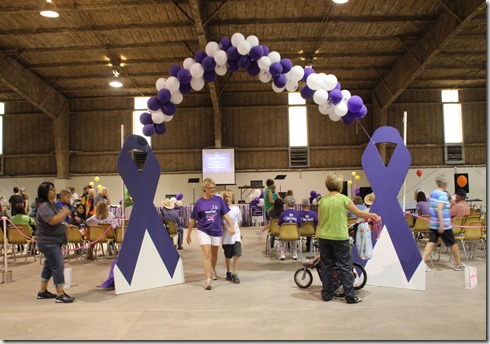 Friday, June 7, was Muleshoe’s night to do Relay for Life, a nation-wide, major funding event for the American Cancer Society. Not having been before, I decided to check it out. The program was held at the Bailey County Civic Center this year, which turned out to be a good thing. Rhonda Myers had just given a presentation on the history of Muleshoe’s Relay for Life and made the comment that the weather was always nice the day before and the day after the event but never the day of the event. Sure enough, about 9:30 we were blessed with quite a thunderstorm, so thank goodness the crowd had shelter in the building. This did, however, change the route of the walking  track that was marked off going through and around the building. 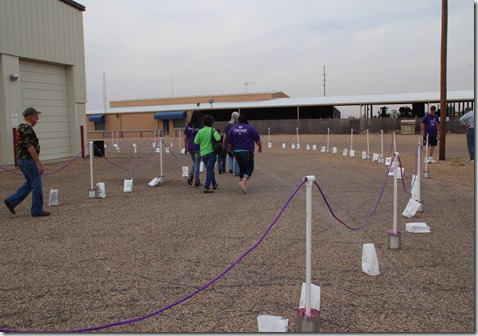 When I arrived, the opening ceremonies were over, which included the national anthem and prayer, introductions, followed by a survivor lap and caregiver lap to give recognition to those who have dealt with cancer up close and personally. The event is organized around walking teams who are also encouraged to set up booths to sell food and various other things to sell-the purpose of the event, after all, is to raise money for cancer research. The aroma of barbecue, chili, hamburgers, popcorn, and so much more enveloped me as I walked in. Roasted corn, cupcakes, nachos, brownies, ice cream floats, and no telling what else that I missed were also up for sale. I had a pulled pork sandwich, cole slaw, an ice cream float, and a cupcake, and wished I had had room for more. 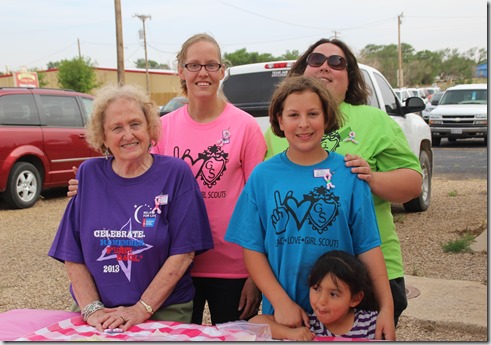 Since Girl Scouts founder Juliette Gordon Low died of breast cancer in 1927, naturally the Muleshoe Girl Scouts had a booth making remembrance pins in her honor. Sue Bessire wears a caregiver shirt and Gayla Gear wears her First Methodist Church team captain shirt. Relay for Life T-shirts in different colors were everywhere but they have to be earned. Survivors earn their purple shirts the hard way, beating cancer, earning a gray caregiver shirt is obviously also hard to earn. Other shirts are earned by raising a hundred dollars and serving in some capacity: team captains-green; team members-white; Bailey County Relay for Life committee members-orange. 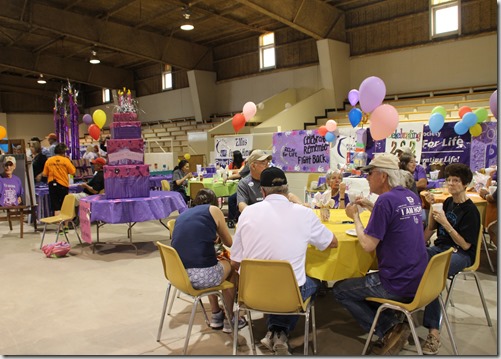 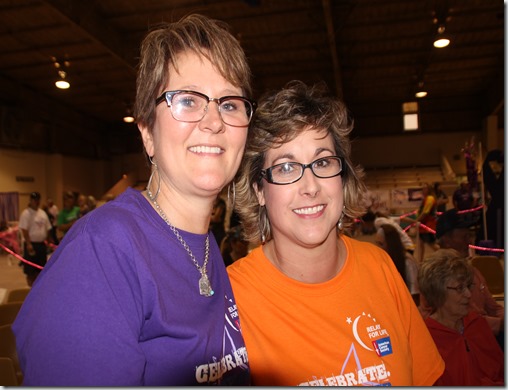 Rhonda Myers and Terry Smith were co-chairmen of the night. Rhonda has been involved since 2007 as a breast cancer survivor (see “Pretty in Pink-the Shirt, That Is, Not the Movie,” November 1, 2010), and Terry became involved in 2008 after her father became a cancer survivor (and still is) and the loss of a close friend. 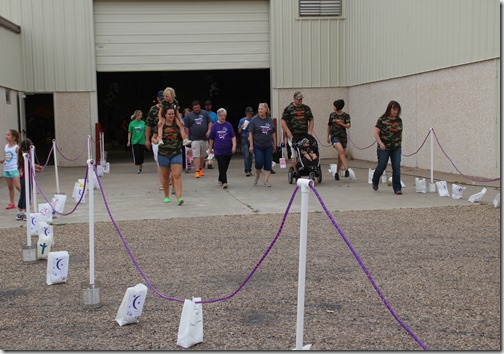 Relay for Life has been around since 1985 when Dr. Gordy Klatt walked for 24 hours around the track at Baker Stadium at the University of Puget Sound in Tacoma, Washington to raise money for the American Cancer Society. (The reason for the 24 hour walk is that cancer never sleeps, so the walkers don’t sleep.)   Thanks to the friends who paid him $25 to run or walk for 30 minutes with him on the track, he raised $27,000 and in the process created an event that promoted friendships and shared experiences for people who had dealt with cancer in a variety of ways while making money to fund research in this devastating disease. Events to celebrate-the survivor’s lap; remember- the luminaria ceremony; and fight back-making a commitment to be screened or talk to elected officials, are carried out all through the night as a way of facing and dealing with the impact of all forms of cancer. 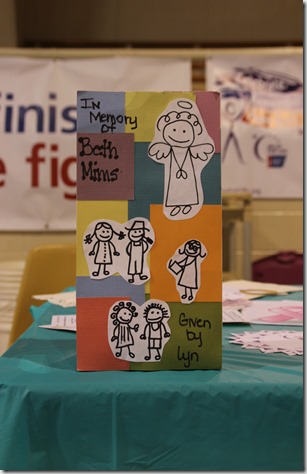 This luminaria on display was made in memory of Beth Mims, a cancer victim. 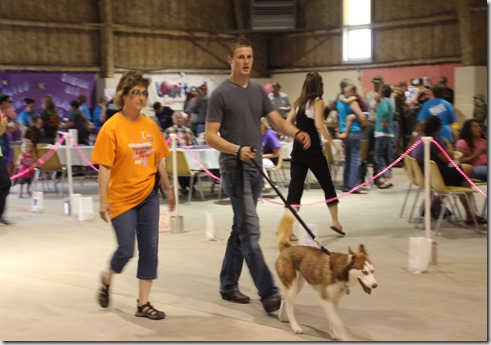 Terry Smith and her son Riley walked with their Siberian husky, Athena, in the Bark for a Cure lap, one of the popular events of the night. 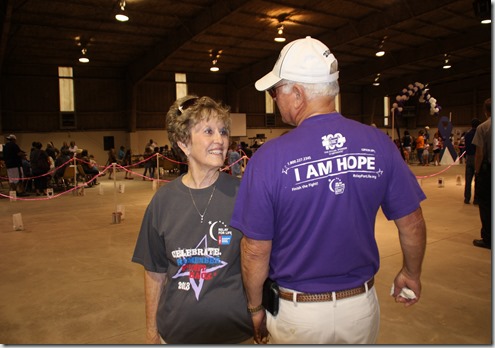 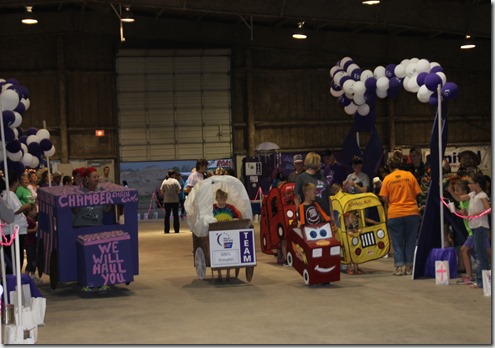 One of the more recent events is the Road to Recovery race for the cardboard cars entered by the various teams. This event is intended to spotlight the program sponsored by the American Cancer Society that provides rides to patients who need transportation to receive treatment. And volunteers are needed to provide this service in the Muleshoe area. The American Cancer Society is 100 years old this year and since their inception has raised 3.8 billion dollars for cancer research. They also have the lowest rate of use of funds for administration of the organization, 7%, of non-profits in the United States. Much more goes on through the night- skits, music, silly contests- but those I have mentioned give you an idea of what there is to enjoy and participate in. So next year when you start hearing about Relay For Life, make plans to attend. Stay the night or stay a while, visit with old friends and make new ones, eat, walk, contribute to the cause. Next year you could be wearing one of those survivor or caregiver shirts. You never know.