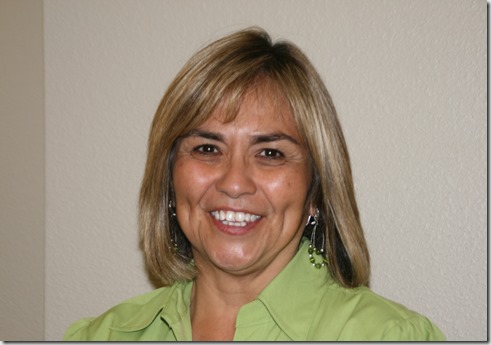 Irene Mason was recently named Beta Sigma Phi’s Woman of the Year, in part because of her work with the Youth Advisory Council that she began three years ago, which mirrors the Muleshoe city council. I attended their last meeting of the year Monday to see how the youth council works. But first, some background. Irene, who is active state-wide in city government associations, saw some youth councils in other cities and decided Muleshoe could benefit from one as well. But with  a difference. What she saw were youth councils that were basically service organizations, something more akin to our SCAC (Student Community Action Club), who have projects throughout the year. What she envisioned was an actual youth version of city council, providing the kids with the opportunity to really learn about how city government works. The council is composed of nine high school students who go through an interview process to be a member. The current council members address the eight grade class near the end of the school year and tell them what the council is all about. The kids who are interested sign up and then go through an interview conducted by Irene, city manager David Brunson, and city secretary LeAnn Gallman. The experience of being interviewed is a life skill that they can benefit from later on as well. Once they are accepted, they have the option to remain on the council for the duration of their high school careers. Irene, with input from LeAnn Gallman, and David Brunson,  match each student with a city council position. The students then carry out the duties of that position in their meetings and even shadow their counterparts outside the council meetings to learn more about what that person deals with in relation to city government. This year’s assignments were: Mayor Stephanie Infante; Mayor Pro Tem Kayla Preston; Council members Marissa Hernandez, Katie Lovell, and McKenna Dunham; City Manager Garrison Myers; City Secretary Allegra Mora; Police Chief Grey Johnson; and Public Works Director Blayne Shipman. 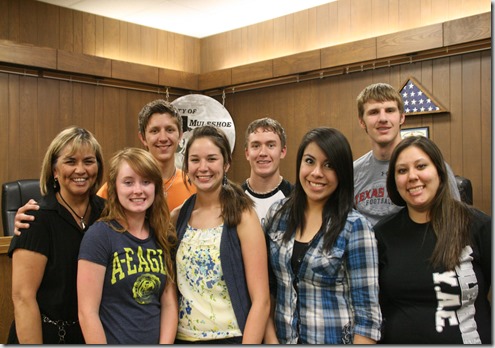 The YAC, as they are abbreviated in the meeting’s minutes,  meet an hour before the actual Muleshoe city council and work through the same agenda city council will address, as well as some of their own projects. Then they are present for the actual city council meeting that follows and give a report on what they did at their meeting with regard to any projects or issues they discussed. Sometimes they are also asked for input on issues city council has to deal with, especially those that would affect school-age children, like the proposed juvenile curfew. The adult members of the council assured me that the kids’ insight is always valuable and some of the questions they raise are thoughtful as well as thought-provoking, which helps city council determine their decisions on some matters.
When the kids spend outside time with their city council counterpart, they are awarded CEUs (continuing education units) for their efforts, which, besides learning about the real duties of that position and how continuing education works in the business world, also gives them valuable community service involvement to show on resumes and college applications. 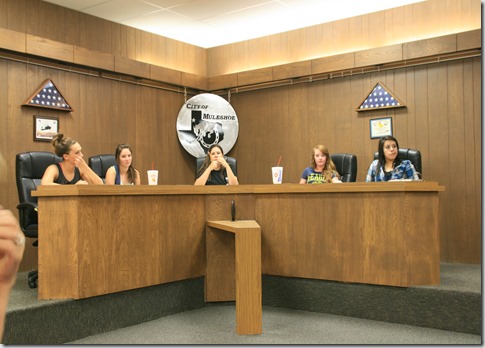 The YAC meeting is conducted just like the real thing, opening with a prayer, the pledge to the flag, following their agenda, and using correct Parliamentary procedure, all real life skills that will serve them well later in life. Pictured here left to right are McKenna Dunham, Kayla Preston, Stephanie  Infante, Kalie Lovell, and Marissa Hernandez. The other council members are seated in the audience and at the city manager’s table, not shown here. 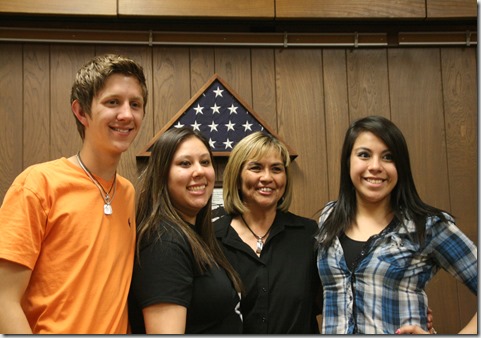 Garrison, Stephanie, and Marissa, the three graduating  seniors leaving the council this year are the last members from  from the inaugural group, which makes their departure bittersweet for Irene, who has appreciated their leadership with the council these last three years. 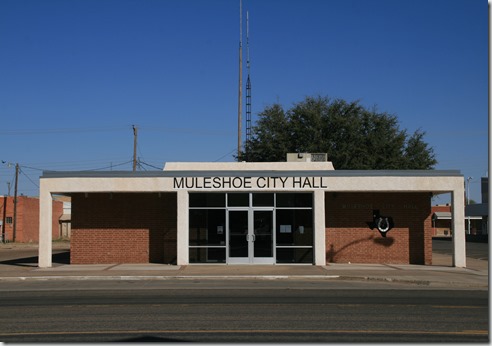 Thanks to Irene’s vision, Muleshoe is blessed not only with a city council, but a companion city council that is training tomorrow’s leaders to be informed and educated about city government, involved and effective good citizens of the future. Our future.
Not a bad deal, I must say.