Carol Sue Comes For a Visit 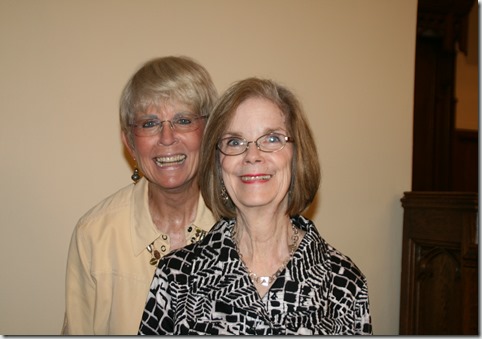 Carol Sue and I go way back-literally from birth to the present. So when her mother died last September (see “600 Miles and 60 Years,” October 17, 2012), after the funeral some of her other friends and I convinced her she needed a break from everything that goes with caring for an ailing mother to arranging the funeral, not to mention a demanding job, and it was decided  that the best way for that to happen was for her to get out of Dodge, well, Dallas, in this case, and come revisit the slower pace of life in a small town, Muleshoe, in this case. I told Bill that after I picked her up at the airport, we would eat and shop in Lubbock, to which he wondered how shopping in Lubbock would be any different to shopping in Dallas, what with the big chain stores and all, so I knew I had my work cut out for me. Her visit went something like this… 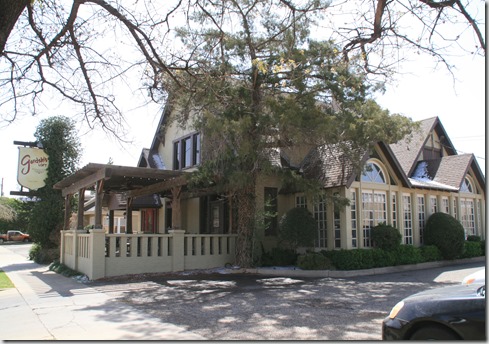 On Thursday I picked her up around noon at Lubbock International, which was her first culture shock, since the Lubbock airport is small potatoes compared to DFW or Love Field, either one. We ate at Gardski’s Loft, a nice place to eat that is not to be found in Dallas. We literally had the place to ourselves by the time we finished our meal and visit and walked out at 2:15 p.m. We did hit a few ubiquitous stores before heading to Muleshoe to enjoy a steak supper at home followed by non-stop talking late into the night. We looked through scrapbooks, laughed about the nights we spent at her house curled up in a comforter under the piano in the living room with all the doors shut and the window-unit air conditioner turned way down, remembered Ethel Mae, the housekeeper with the one snaggle-tooth, remembered departed classmates, and reflected on the paths our lives have taken since childhood. 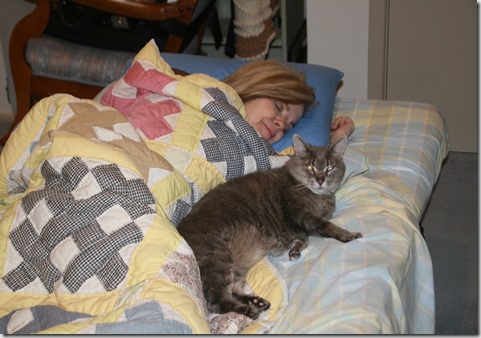 I let her sleep late Friday morning-after all, this was supposed to be her chance to rest, and I found Poopie Cat snuggled up with her in bed, Poopie’s way of showing Carol she was welcome. Thank goodness Carol wasn’t allergic to cats! After more visiting over breakfast, we drove back to Lubbock and hit a few stores, some name-brand, some not so much, one of them being a luggage store, as the zipper on her suitcase had cratered and she wanted to replace it with one of those styles that rolls on four wheels. I decided if I ever needed another suitcase, that’s the kind I will get. We then ate, at all places,at  the new United Market Street on 19th and Quaker since we had a big discussion comparing Whole Foods and Central Market and whether or not the Market Street stores in Dallas were in fact related to the United stores in Lubbock, which, it turns out, they are. 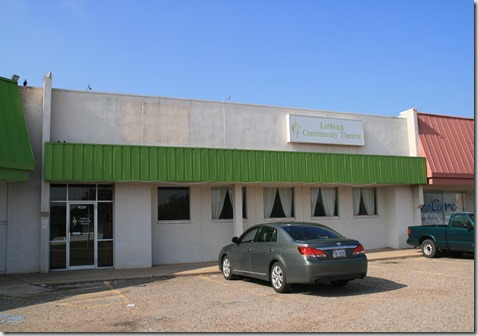 We then made it over to the Lubbock Community Theatre to enjoy a performance of “The Trip to Bountiful,” which was the main reason for going to back to Lubbock that day. Even though they no doubt have community theatre in Dallas, this was still a little different entertainment for her. Saturday we ventured over to Clovis, New Mexico, to shop a few places that I knew would be different to Dallas. We didn’t want to take the time to drive to Santa Fe, so Clovis had to be the stand-in. 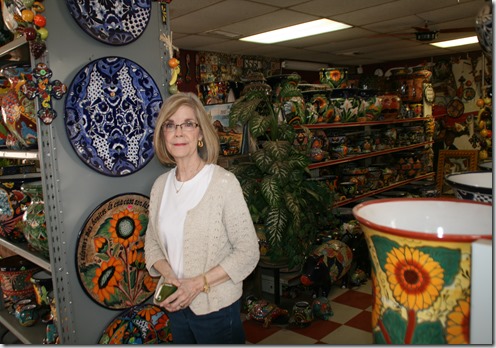 On the way we stopped at the Talavera pottery place in Texico and she was delighted to find a Talavera monkey to add to her collection. 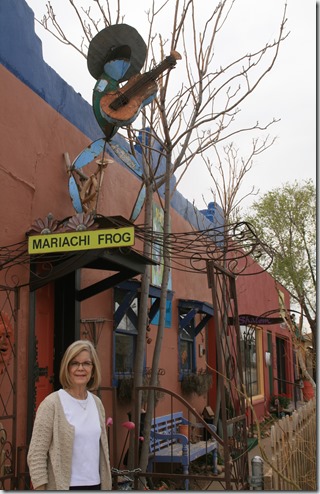 Then we found the Mariachi Frog, an interesting little collection of shops and vendor booths that I don’t think she would see in Dallas. 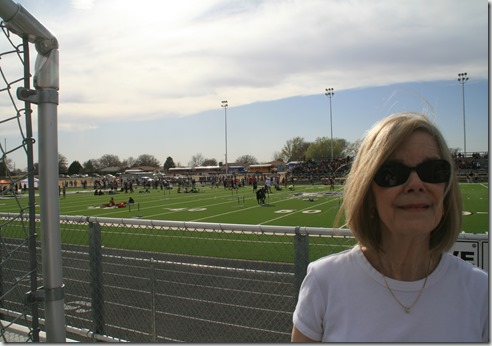 We drove around a bit before coming back to Muleshoe so we could make the finals of the district track meet being held at the high school. That was definitely not something she would have thought about doing in Dallas even though Carol was a teacher in the early days and still enjoys watching kids do their thing. And it was a pretty day, finally, so it was nice to be outside to bask in the sun and not have to fight the wind and dust. 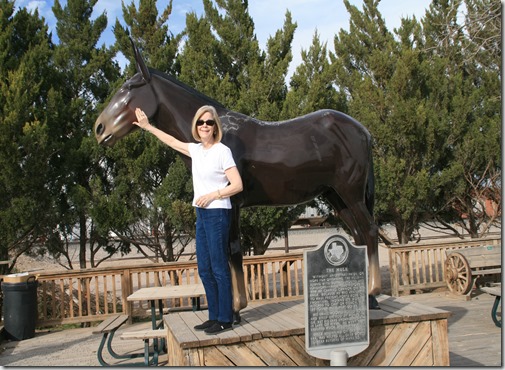 And what would a trip to Muleshoe be without taking a picture at our famous Mule Memorial with Ol’ Pete? 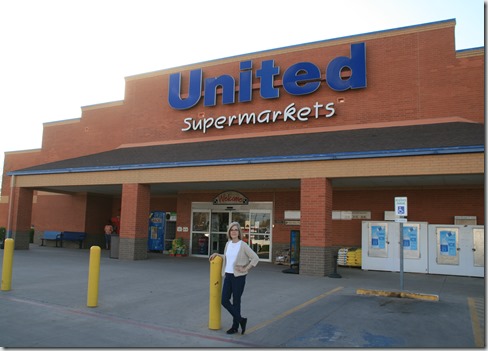 We even made a trip to our United grocery store, that small town meeting place where everyone said hello and wondered who the stranger was with me. 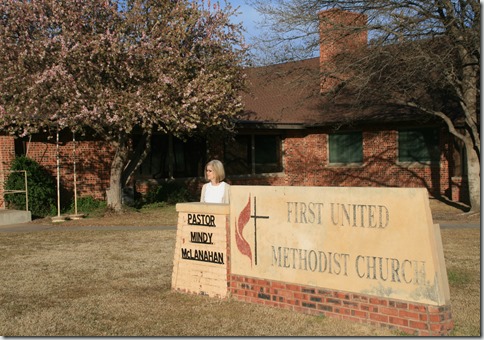 Sunday morning I took her to Sunday school and church at our Methodist church. We grew up in the same Methodist church in Rosenberg, but instead of church in the big city, where she found the churches to be too big and impersonal, she has been attending a Bible study group, the Roaring Lambs, which has a variety of outreach projects. I drafted her to be our Sunday school guest speaker, and she told us about this group and some of the good things they do. We were going to eat at Leal’s, something else she would not do in Dallas, but it turned out to be camp Sunday, when the education committee prepares the meal and takes up a love offering to help fund kids who want to go to church camp but need a little assistance, so we did that instead, another slice of life in a small town. 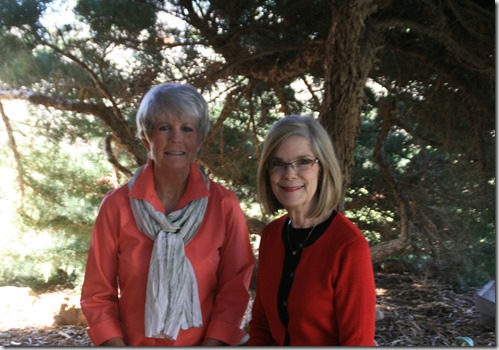 After church we took one last picture together, and then it was time to get her back to the airport for the trip home, so we headed for Lubbock once again. She insisted on going the full hour before flight time; I have never seen that airport busy enough to warrant going that early, but she wanted to, so we did. Memories of the lines at DFW, no doubt. 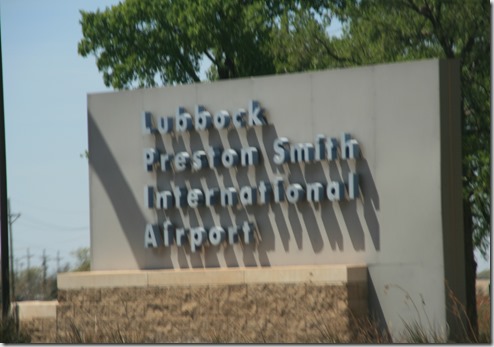 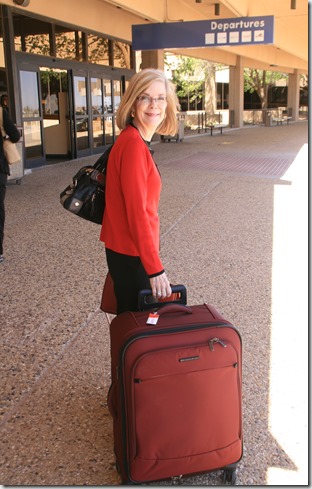 We put her out at the curb with her cool new suitcase,  hugged her neck, and she was on her way. I hope she went home refreshed.  I‘m not sure she went home totally rested; we stayed up too late every night for that, but we did have a good visit. I hope next time it doesn’t take seven months to get her here.