SCAC Does the Bake Sale 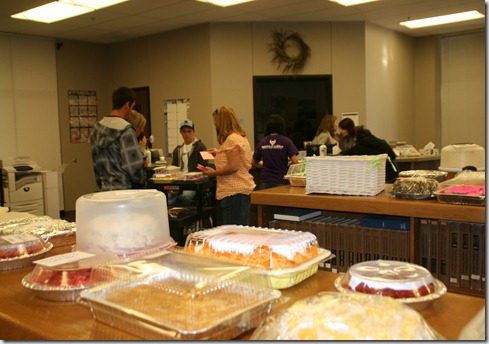 I helped with the Student Community Action Club bake sale last Saturday. The club, usually referred to as SCAC, has, for too many years to count, but I believe it would be 30, hold this bake sale as their fund raiser for the year, the proceeds from which they donate to the Muleshoe Heritage Foundation. (See “Muleshoe Heritage Center,” January 31, 2012, for the history of this student organization.) The bake sale is quite a to-do, broadcast on Channel 6, and now also on gillambadvertising.com and its Facebook link.  SCAC members host the event, run it as a call-in auction,  announcing and displaying each item as it goes up for sale while other members man the telephones taking bids as they are called in. After the bidding is closed on items, other members deliver the items and collect the bid. 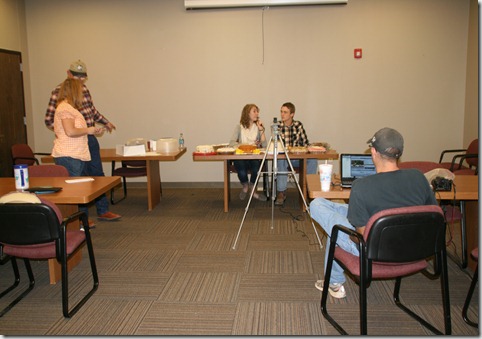 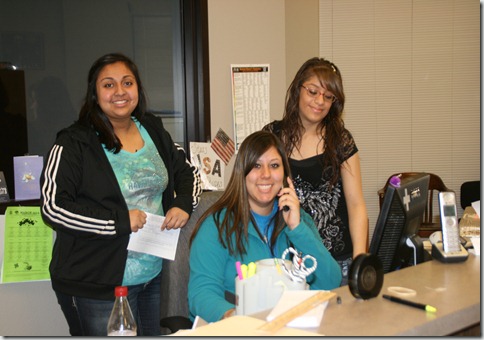 Priya Patel, Stepanie Infante, and Evelyn Contreras man the phones and take the bids during their shift at the sale. I enjoyed watching the kids work the sale. I  missed Garrison Myers handling the first shift  in front of the camera, as I was helping Gina Mardis catalog the dishes as the kids brought them in. Bailey Bales and Ryan Johnson took the second shift, and it was fun to listen as they kept up a patter worthy of sportscasters calling a football game making sure there was no dead air. Sarah Whitworth and Colton Clarkson took the last shift, and Sarah got especially wound up giving sponsor Chris Mardis a hard time. Mr. Mardis has been the sponsor for the last 15 years, taking over for original sponsor Jean Allison when she retired from the club. 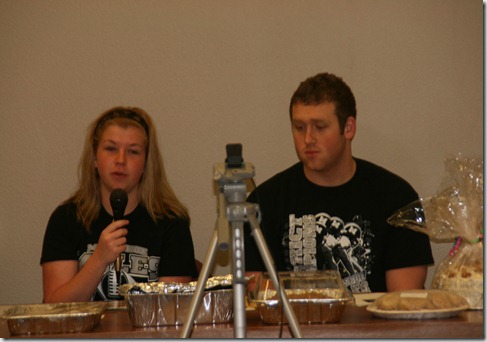 Bailey Bales and Ryan Johnson during their turn as announcers for the sale. I didn’t catch them with smiles, but they did have a good time selling the items. 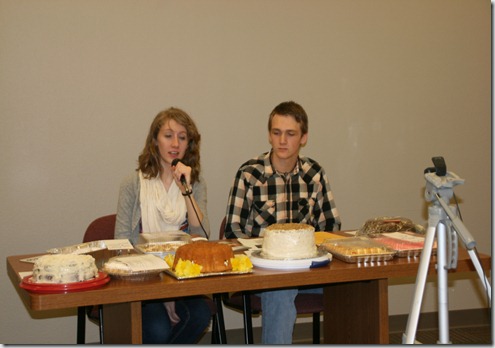 Sarah Whitworth and Colton Clarkson had fun with their turn at the microphone as well. The club, limited to juniors and seniors,  has 23 members and meets once a  month in homes of some of the members. They share a meal, have a program, select a citizen of the month, and in at the appropriate times discuss their various projects for the year, including the bake sale, rest stops during the Tour de Muleshoe bike ride, decorating the buildings in the Heritage Center and helping during its Christmas open house, and other opportunities that may come up .Officers are: Garrison Myers,  president; Priya Patel, vice-president; Veronica Morales, treasurer; Ryan Johnson, secretary; Cristian Zaragoza, parliamentarian; Chris Cage, reporter; and Sarah Whitworth, historian. Other members on hand to work the sale were Marion Gutierrez, Adrienne Precure, Diana Salcido, and Eli Leal.  Other members who brought baked goods were  Kalie Lovell, Dalia Melendez, Daniela Mendoza, Don Ann Rempe, McKenna Dunham, and  Mandy Scolley. Quite a variety of dishes were brought in: cupcakes, cakes, cobblers, cookies, salsa, lasagna, chicken spaghetti, cinnamon rolls, all kinds of good things to eat. Bids ranged from $5 to $60. Friendly bidding wars even broke out on a few items, sometimes because the dish was especially appealing or the reputation of the cook widely known, and sometimes just as friendly rivalry between people, since the names of the bidders are also announced. The announcers had fun with that, challenging the callers to up the bid against each other. 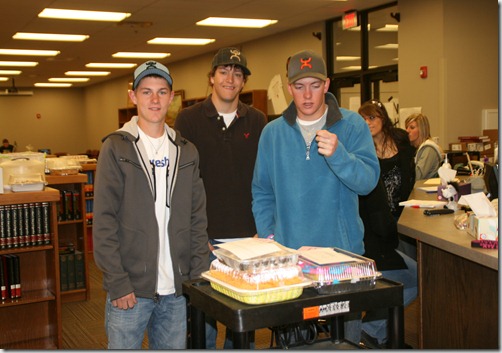 Colten Harris, Caleb Wood, and Chris Cage were the main crew who delivered the goods to the people who won the bid. Logistics of the sale have changed over the years.Originally the sale was broadcast out of the Channel 6 studio, located in the home of Jack and Magann Rennels. Channel 6 at that time was a staple in most homes in Muleshoe via cable. These days many people have turned to Dish or Direct TV which do not carry Channel 6, so Gil Lamb Advertising and Facebook have taken up the slack. This year the sale was broadcast from the Muleshoe High School library. Mr.  Mardis said that so far the bake sale has brought in $1,200, which will make a tidy sum for their donation to the Heritage Foundation. The bake sale is usually held about this time every March , so next year if you would like to help the Heritage Foundation and the kids, tune in to Channel 6, www.gillambadvertising.com, or their link on Facebook, and buy yourself something good to eat. It will be a win-win situation. A special thanks to Chris Mardis for his help in writing this article and for all the work and time he has devoted to SCAC over the years.