Quanah Parker Shot An Arrow Into the Air…

Quanah Parker shot an arrow in the air and one of them landed in Muleshoe. The latest addition to the Muleshoe Heritage Center is a 22-foot tall arrow sculpture, the 48th such marker to be installed on the Quanah Parker Trail, a project undertaken by the Texas Plains Trail Region (TPTR), one of the ten heritage regions formed by the Texas Historical Commission. The TPTR conceived the idea of the Quanah Parker Trail as way of honoring Quanah Parker, chief of the Comanches, who were the last Native Americans to roam this area and live their nomadic lifestyle before being relocated in reservations, and to connect the 52 counties of the Texas Plains Trails Region that share that unique piece of history. 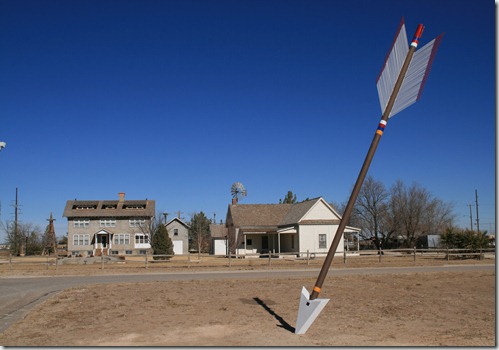 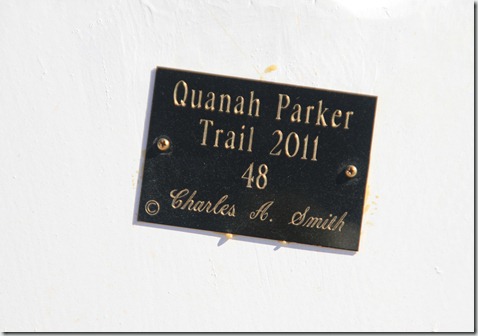 The arrow that came to be the marker to designate the areas that had some connection to Quanah Parker was not created for that purpose originally.  The sculpture is the work of Charles Smith, a cotton farmer and gin operator from New Home, Texas, whose welding skills and artistic passion were first evident in the steel palm trees he fashioned. The first arrow was commissioned by Gid Moore Crop Insurance Company and inspired by the Henry Wadsworth Longfellow poem, “The Arrow and the Song.” It was installed as the first piece of an Art Literacy non-profit sculpture park in New Home. 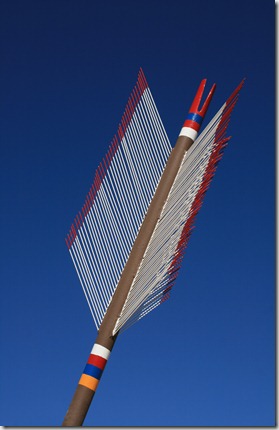 Dr. Holle Humphries, PhD, and Dolores Mosser, who are affiliated with the TPTR,  happened upon the arrow in New Home while on a trip through the Texas Plains Trails Region and were struck by its size and the fact that when the wind blew through the steel wire “feathers,” the arrow made a soughing or sighing sound, a nice authentic touch. They tracked down Mr. Smith, told him of the plans for the Quanah Parker Trail, and he offered to make an arrow for each county that could authenticate the claim of a link to the Comanches and Quanah Parker. The arrow seemed a fitting tribute and symbol for the trail. Descendants of Quanah Parker were contacted, and they agreed and approved the use of the giant arrow to honor the memory of their ancestor. Historical markers at the Muleshoe Wildlife Refuge and at Coyote Lake document the presence of Comanches in Black Water Draw and Yellow House Draw which run through the refuge. Mummified Indian remains have been found in the sand hills, and a chief and his wife, reportedly of the Quanah Parker clan, were killed on refuge land. Because of these connections to that specific tract of land, a smaller companion arrow has also been placed at the refuge headquarters building.

But it also seemed logical to place the larger arrow at the Heritage Center where it might be seen by more people and pull in curious visitors. The arrow struck ground at the Heritage Center on January 18, 2013. Charles Smith was on hand to oversee the installation of his creation, along with Tom Watson, Lacey Vardeman, Dolores Harvey, Bobbie Harrison, Abby Vardeman, and Gina Wilkerson. It has been placed in front of the now under construction  visitors’ center, marking the starting point for visitors to see the other historical structures. Quanah Parker was the son of Comanche warrior Peta Nocona and the white captive turned Comanche wife Cynthia Ann Parker. Even though he tried to defend his people and their way of life, he realized that surrender was necessary to save his people from death at the hands of the U.S. Army. After their relocation to the reservation near Ft. Sill, Oklahoma, he helped guide and instruct the Comanches to their new way of life and tried to build an understanding between the two merging cultures. He became something of an elder statesman and celebrated native son of Texas for his efforts. To read more about this noteworthy Native American Texan and the Quanah Parker Trail, as well as see a map of the trail and the counties involved, these sites might be helpful: The Quanah Parker Trail at  www.quanahparkertrail.con/Quanah  Texas Plains Trail Region at www.texasplainstrail.com/ .The West Texas Historical Association at www.swco.ttu.edu/westtexas Articles about the installation of the Muleshoe arrow can also be found in the Lubbock Avalanche-Journal for January 19, 2013, and the Muleshoe Journal for January 24, 2013. 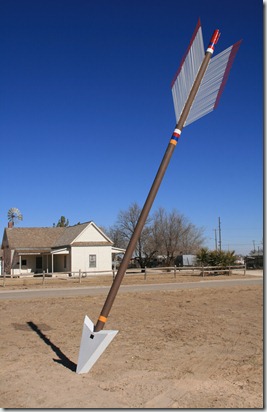 But all you have to do to see the arrow painted in Comanche colors of red, blue and gold and hear its song is visit the Muleshoe Heritage Center or the Muleshoe Wildlife Refuge.

My thanks and credit for their work go to Dr. Holle Humpnhries and Hanaba Munn Welch who compiled the information from which I took facts for this article.