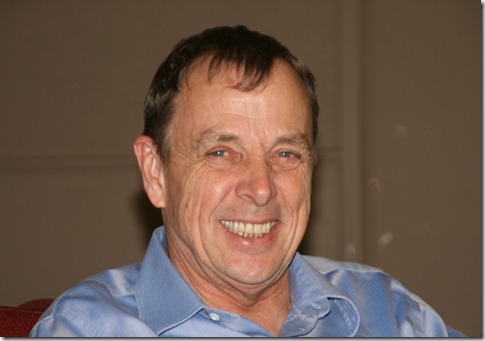 Jaston Williams of Greater Tuna fame, was in Lubbock this past weekend to conduct a writing workshop, The Art and Heart of the Story, hosted by and held in the Lubbock Community Theatre at the corner of Boston and 43rd Street. (More about LCT next week.) I couldn’t afford to pass up an opportunity to study and work with an author/playwright who has performed on Broadway, in Europe, twice played the White House, written and acted in a variety of productions, had an HBO special-in other words, a real live famous creative artist with whom I had a chance to work. So of course I did. Well, not before talking it over with Colten since it would involve missing one of his football games, in which he saw lots of playing time and that they won.

But I digress. Jaston grew up in Olton, Texas,  where his grandparents were some of the first settlers in Lamb County. At sixteen the family moved to Crosbyton, Texas, where he finished high school. He attended Texas Tech, and majored in theater arts, although he said he really had seen himself as a writer, not an actor, but life, as they say, had other plans. What should have been his senior year at Tech he spent in San Antonio with the First Repertory Theatre Company, which started what Jaston smiled and called his Bohemian decade. He bounced around Austin, San Antonio, Taos, and San Francisco. Somewhere during that time he met Joe Sears in San Antonio, and they came up with  Greater Tuna, which went on stage for the first time in Austin in 1981. A New York critic just happened to be in town and saw the show; within a year Vera Carp, Pearl Burras, Didi Snavely, and the whole crew opened in New York. The Tuna phenomenon then toured for the next 30 years and during that time Tuna Christmas, Red and White Tuna, and Tuna Does Vegas were created. It has been quite a run. 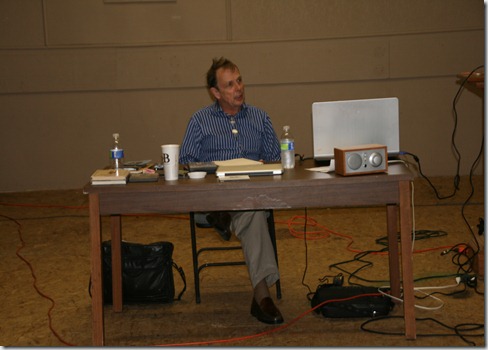 Jaston and Joe Sears decided to retire the Tuna series, and  Jaston, at 61,  is ready to slow down a bit and do other things, like conducting more writing workshops and enjoying time with his family in their newly purchased home in Lockhart, which still keeps him close to his beloved and inspiring  Austin.  He is currently touring  a new one-man show, Camping with Gasoline, is working on a novel, and will star in another  one-man show about Truman Capote, Tru, written by Jay Presson Allen, opening in Austin on January 15th and running until March 5th. 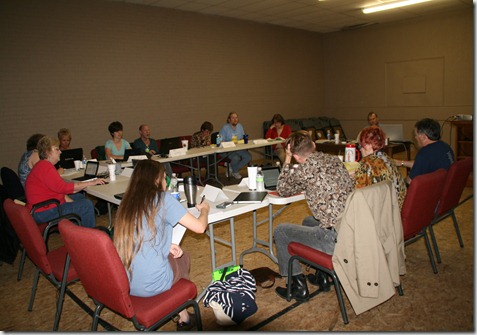 Jaston wanted us to be inspired to write from real life experiences, which we did. As a group we discussed and shared ideas, wrote several drafts and rewrites, and on Sunday afternoon, read our pieces to an audience of about 40 friends, family,  and Lubbock Community Theatre board members. I think we all broadened our writing skills, and for those of us without a theatre background, like me, it was fun to perform under the lights. 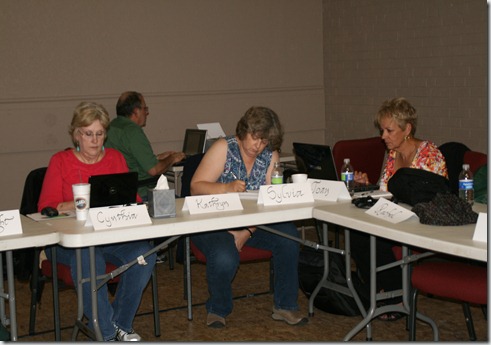 As we worked, Jaston came around and looked at our progress and gave suggestions and direction for our piece. 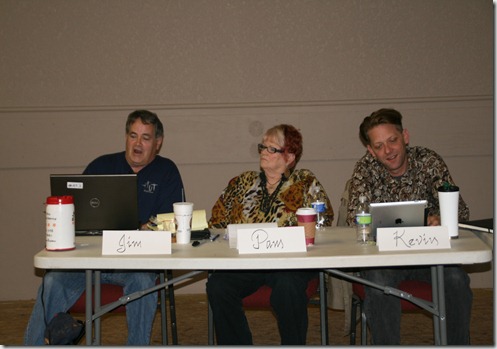 We shared as we made changes and edited our work. Not surprisingly, all of us were from the Lubbock area, even John from Paris, who grew up in Childress, which is not exactly Lubbock, but the general area.  Most were involved in or had been involved in some way in education, usually connected to theater arts or UIL literary events, which I didn’t find surprising, either.

Andy Rasa practices at the dress rehearsal on Sunday. 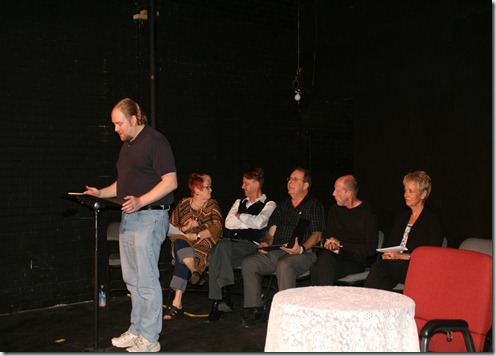 The rest of the group waits their turn to practice under the lights. 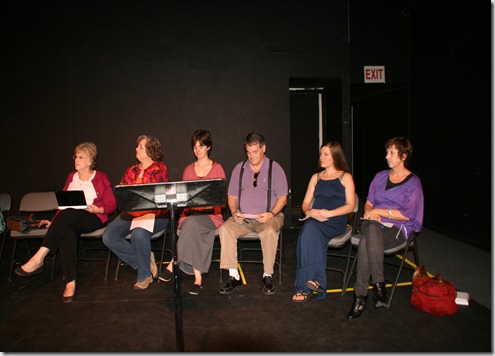 Our group portrait-front row, left to right: Sylvia Ashby, Lubbock; Pam Brown, Lubbock; Jaston; Yours truly, Muleshoe; Amber Patrick, Lubbock. Back row, left to right: John Wright, Paris, Texas; Andy Rasa, Lubbock; Tony Thornton, Lubbock; Kevin Helmer, Lubbock; Jim Bush, Lubbock, Rachel Morrison, Plainview; Joan Sears, Lubbock; Cynthia Davis, Lubbock; Kathryn Rainwater, Lubbock; and Cindy Campbell, Lubbock. A tremendous amount of talent was displayed by this group, and we produced a variety of topics and styles in our writing; drama, satire, humor, a bit of history., remembrances, a letter home, even a song. The settings ranged all the way from Africa to Viet Nam to Louisiana to North Carolina and back to Texas and our hearts. See, aren’t you sorry you weren’t there to see what you could come up with? 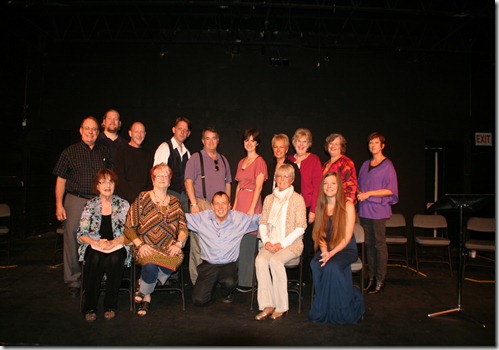 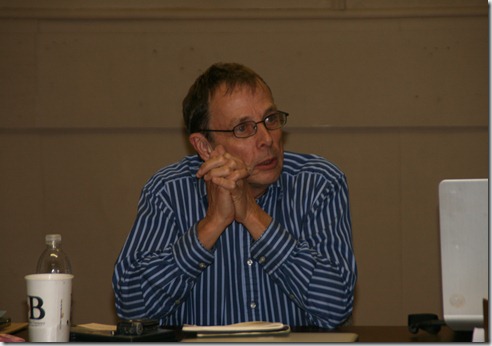 My condolences to those of you who did not have the chance to meet and laugh with the residents of Tuna, Texas. But if you want to get to know one of their creators and develop your writing skills at the same time, perhaps you’ll have the chance to attend a writing workshop hosted by Jaston one of these days. Who knows where it might take you.

My thanks to Jaston for graciously allowing me to interview him and to all the workshop participants who patiently let me bug them for information and  take pictures of them. Thanks to the Lubbock Community Theatre and their board members for sharing their facility and time with us.