Death of an Agave 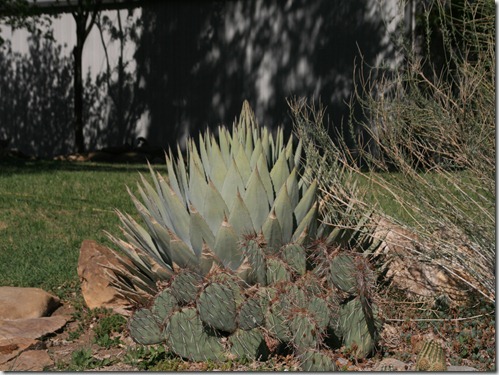 April 4, 2012 – My worst fears were answered; my oldest, biggest agave was gearing up to bloom.  Normally, a cactus/succulent enthusiast looks forward  specimens blooming. Well, I will certainly enjoy this bloom, but agaves are monocarpic, which means they  bloom once in their life, and then they die. And that I am not looking forward to. Look right in the middle of the plant and you will see the pointed tip of the bloom stem, or mast, as it is called, beginning to form. 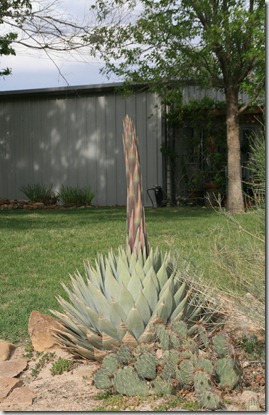 April 11, 2012 – Once the process starts, the mast grows really fast. This picture was taken a week later. Agaves are sometimes called century plants because it seems like they live a hundred years before they bloom and die. Not so. Depending on the variety, soil, moisture, and growing season, they can bloom starting at around 15 years of age. This one is probably about 15. When I planted it, I was not into keeping up with details like that. Now I am more aware of keeping up with the ages of my plants. 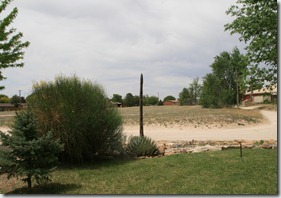 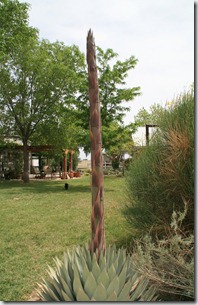 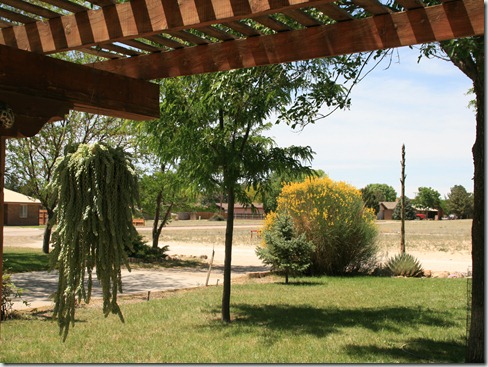 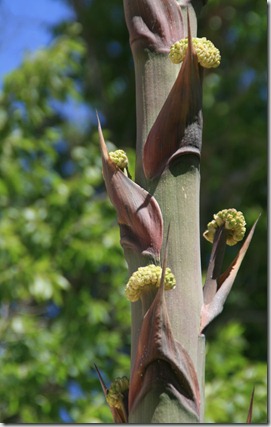 April 25, 2012 – These two shots were taken on the same day. Notice in the close-up that the flower buds are beginning to form. The trunk is hard and solid as wood. Also note the Spanish broom blooming yellow by the agave. Everyone needs a Spanish broom; they bloom in the spring and the scent is wonderful. 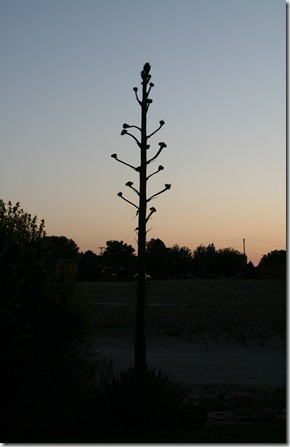 April 30, 2012 – As the mast grew and the buds formed, it created an interesting and  pleasing picture with just its shape, seen here at sunset. 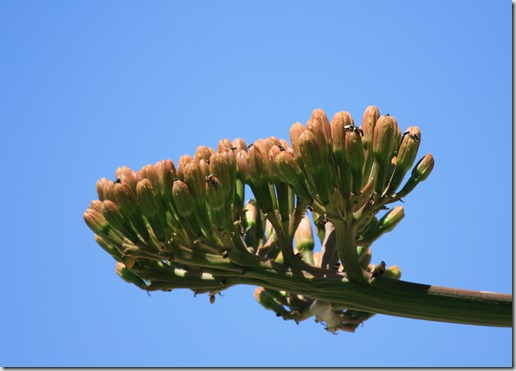 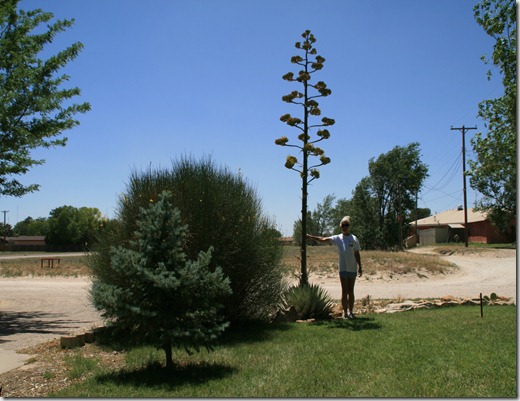 May 27, 2012 – The buds are beginning to open. I am standing by the plant as a point of reference. At 5’3, I am not very tall, but you can see the bloom stem is tall. The bigger the agave plant, the taller the mast will be. My plant is an agave parryi; agave americana grows even taller than this. 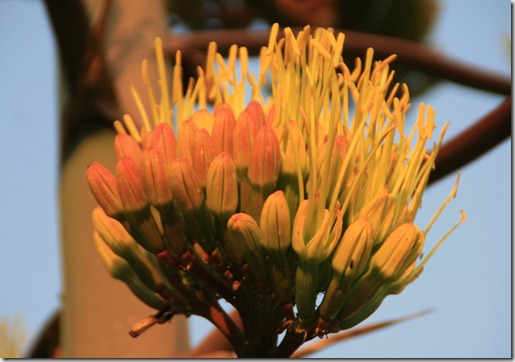 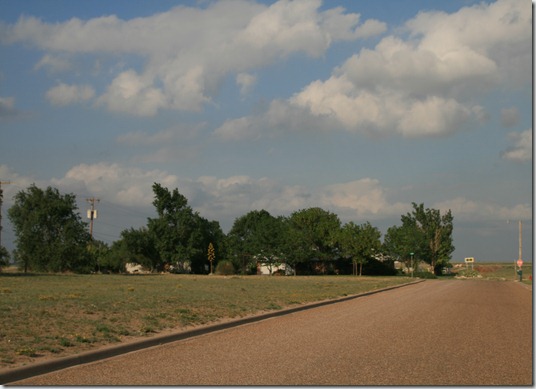 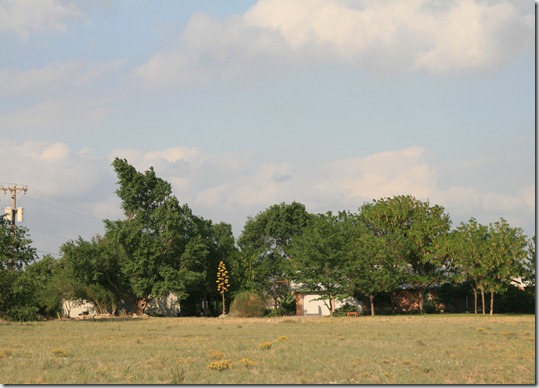 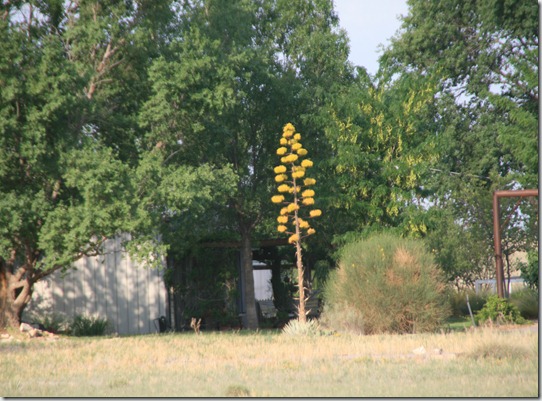 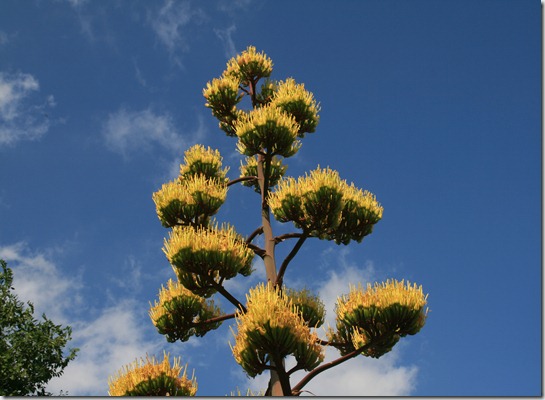 June 6, 2012 – These four pictures were all taken on the same day, even if the sky is lighter in the second one!  I wanted to show the full effect of the plant’s imposing presence, from far away to close up. This is the agave in bloom at its finest, nine weeks after the process began. 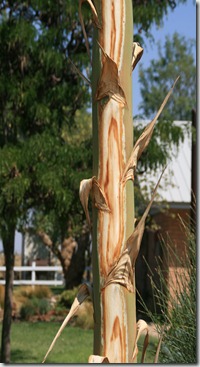 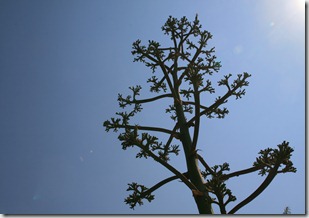 August 29, 2012 – Time is taking its toll. The blooms have all fallen off, the mast and plant itself have started the dying process. 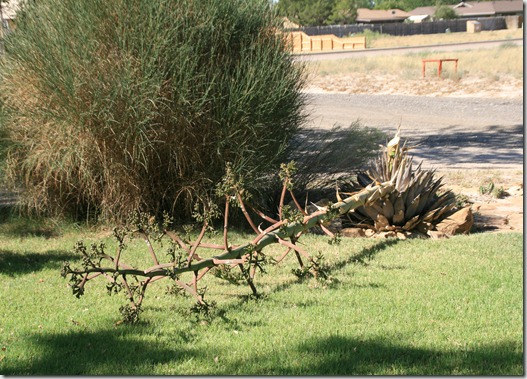 September 10, 2012 – After five and a half months, the time had come for the agave to be put to rest. I preferred that it come down while it still had some dignity left since it had shared its beauty with us for so long. 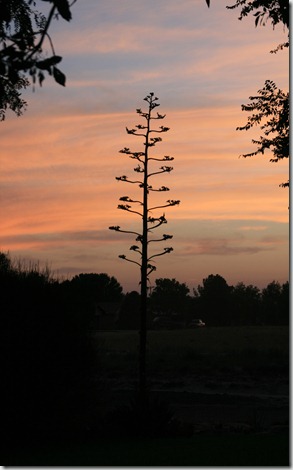 I prefer to remember it this way, still leaving its indelible image on the landscape. You were a good one, little agave.