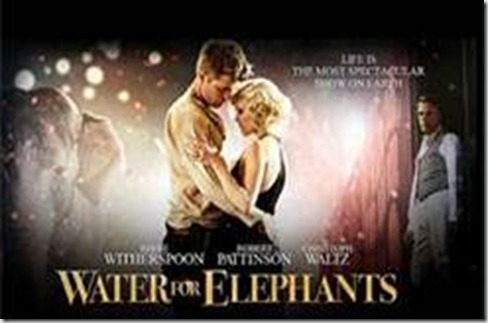 I missed the first few minutes of the movie Water for Elephants the other day. I looked away when the main character had to put a horse out of its pain. I muted the sound and looked away when the elephant was beaten. The denouement turned out right, but for me was bittersweet and  so sad.   I cried and cried. I saw that it was coming on again, so I watched it, this time from the very beginning. And again, II looked away, muted the sound, and cried. The story is set in 1931 during the Depression and follows Jacob, played by Robert Pattinson, who is delivered by fate to a circus train after losing his parents, his inheritance, and devastated, not completing his finals in veterinary science at Cornell University. He finds work with the circus and falls in love with Marlena, played by Reese Witherspoon, the wife of the circus owner, August, played by Christoph Waltz. Jacob, innocent and unworldly, of course falls for Marlena, she for him, and August finally realizes it. Why did this movie, with scenes of animals I wasn’t willing to watch, compel me to watch it a second time? This movie came out in April of 2011, and I remember thinking it was one I would like to see. But before I could get to a theater, it quietly disappeared. And now that I have seen it and had such a reaction to it, I couldn’t help but wonder why it had vanished from the big screen so abruptly. So I did a little investigating. 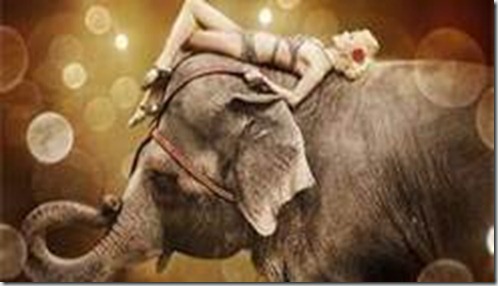 I read four reviews of the movie. Marshall Fine on the Huffington Post just hammered it and the intelligence of people who liked it or the Sara Gruen novel from which it came. He said he certainly wasn’t going to read the book and after having seen the movie, thought less of those who did read it. Ouch! Words he used to describe the movie included clichéd, sentimental, and predictable. He thought the music was sappy and that Robert Pattinson was not much of an actor, In fact, the whole thing was so stupid, he said, that he didn’t even bother to watch the end of the movie. Really? Didn’t finish the movie but he can trash it without reservation? The only fair way to criticize or censor anything is to know what you are talking about, which means watching the whole movie or reading the whole book. He is certainly entitled to his opinion, but I think less of him for his less than professional approach. Todd McCarthy of the Hollywood Reporter wasn’t that crazy about the movie, either, but his criticism was not so vitriolic. He said there was no spark between characters to make the drama more compelling, that the action lacked depression-era sexuality, vernacular, accents, and grit, as in “ Reese Witherspoon should have been more of a dame than a lady.” People magazine’s review by Alynda Wheat said the film was too beautiful for the depression, the action was sluggish, there was no chemistry between Marlena and Jacob, the climax was not wild enough, and that Rosie, the elephant, stole the show. 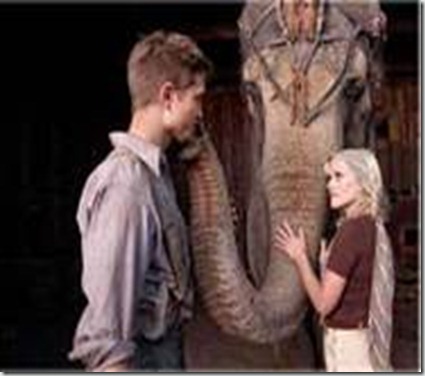 Los Angeles Times reviewer Kenneth Turan felt like the romance of the carnival is what viewers would remember and that August was the most complicated and interesting personality rather than the two stars’ characters. And he also felt that Pattinson was the weak link of the movie, “[offering[ a lot to look at, just not enough to feel.” Chris Bumbray on a website called JoBlo found  the film a pleasant surprise because it was a big budget film not full of explosions and computer generated images (which I also liked), had beautiful cinematography and music, but found Pattinson bland. He also said that Christoph Waltz just recycled his performance from Inglorious Basterds. which I have not seen. But he did recommend it as worth seeing. And finally I found someone who saw the movie more like I did. Roger Ebert called it an “endearingly old-fashioned love story” with plausible sets and real people. He also noted that the screenplay by Richard LaGraveneses showed sympathy for the personalities of the animal characters, which I also appreciated in the movie.

Interesting, isn’t it? We all watched the same movie, but we didn’t all see the same film. And what was it about this one that touched me so?  Well, animals are always a draw for me, and Rosie was no exception. She was so gentle and trusting, and as it turned out, the heroine who saves the day. I am not a circus person, but I thought it interesting to see the circus from an insider’s point of view. I suppose Marlena and Jacob could have shown more sizzle on the screen, but what they did show worked for me.  And August. Well, Waltz may have replayed his character from the other movie, I don’t know, but even if it did, it worked for me in this one. Yes, he was unpredictable, out of control, in need of a sympathetic friend, and I wished he could have made it all work without the cruelty. The music for me was  not sappy, but haunting and beautiful. Hal Holbrook as the old Jacob telling the story served as the bookends to tie the action together was a very important part of the movie and one of the more poignant elements of the story.  When the circus manager he is telling the story to agrees to hire him and says he will get him in the record books as the oldest man to run away to the circus, Holbrook smiles broadly and and brings my tears when he says, “ I’m not running away-I’m comin’ home!’ This lonely old man who lived a good life was still sad to me here at the end of that life. I am one of those people who drive my family crazy when I stay and read the credits; you never know what you might learn from the credits. Movies on TV make it easy to read and re-read the credits all I want to. And I like to hear the rest of the music. I don’t know who was responsible for these credits, but after the human actors were listed along with the parts they played, all the animals, even down to the lowly hyena, were listed as well. How nice. So as you can see, I thought this movie was much better than its box office receipts indicated. And perhaps age has something to do with it. I don’t know the ages of those who panned the movie; I do think Roger Ebert is closer to my age, and I suspect we bring a different perspective to the process. Movie critics, after all, make a living looking for details the rest of us don’t bother to consider. My review!? Water for Elephants is a throwback to movies that entertain. .It was beautiful to watch, told a believable, interesting story, not cluttered with computer-generated scenes, save the one at the end with the animals all on the loose-that was probably CGI-had compelling characters, lovely music, and gave animals the attention and recognition they deserve. Check it out; You could spend that two hours in much less satisfiying pursuits