I don’t know how it is in your town, but in Muleshoe, pre-game meals before home football games is a long-standing tradition. 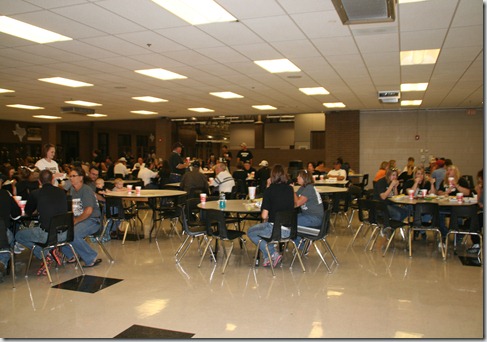 When we moved to Muleshoe in 1980, pre-game dinners were the order of the day, if the day was a Friday home football game day. As a parent when my kids were students at Muleshoe High School, I helped with the preparation and clean-up of some of those meals. When I was  a teacher and class sponsor at high school,  I also got to prepare, serve, and/or clean up after those meals. Teachers and parents are old hands when it comes to these events. The school cafeteria ladies and janitors are a huge help with these meals as well. Everyone does their part. It just comes with the territory. 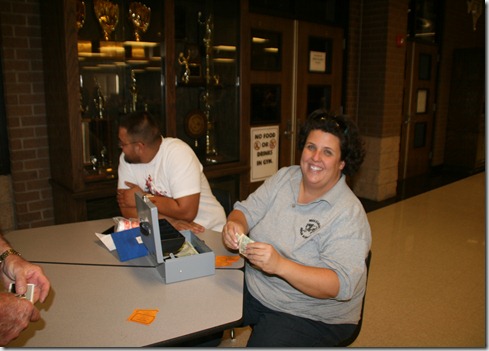 Now when I was in high school at Lamar Consolidated when it was a 3A school, and  Rosenberg was not nearly as big as it is now,  I don’t remember any pre-game meals. I don’t remember eating one, I don’t remember selling tickets to one, I don’t remember Mother having to work at one of those meals, so I wondered, what is the deal with Muleshoe and pre-game meals? Service organizations like Rotary and Lions clubs have always seen and used the potential of sponsored dinners for fund-raisers. You know- feed them, and they will come. I asked around and discovered that in Muleshoe the service clubs had used meals to make money. At some point, the junior and senior classes at school figured out it would work for them as well and started having the dinners to raise money for things like the prom and graduation. Pretty soon the freshmen and sophomores figured they might as well get a head start and not wait until their junior year to make a little money for prom and graduation and whatever else they might need money for. I tried to zero in on just how long these Friday night feasts had been the fundraisers of choice and was able to trace them all the way back to 1958. I suspect it was later, in the 70s perhaps, that the class-sponsored routine became established. Maybe later. But I know this pattern has been around for a long time.

Why are the meals so successful? And they are successful. Last Friday’s home game against Portales saw the first of two junior class-sponsored dinners for the season. Juniors get to have two dinners since they have the expense of the prom. The menu was grilled hamburgers, baked beans, chips, and chocolate cake. They sold 515 plates and could have sold more. 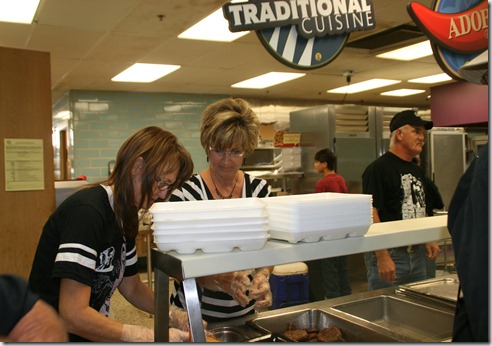 But I digress. Why are they successful?  Perhaps it is the social aspect of sharing a meal with others. I think that is typical hospitality of the South, and Texas counts as part of the South, but I know it is also typical of West Texas, where towns historically were few and far between. It was customary to offer a meal to strangers as well as far-flung neighbors, and it is now a part of the culture. I think the meals are successful because people have to eat, like to eat, and would rather spend money on a meal than an overpriced box of fundraiser candy or wrapping paper or whatever.

Maybe it is just a small town thing. I can’t speak for the other towns who may host the meals, but the community of Muleshoe always supports the kids and their endeavors, and this is just one more way to show their support. And in small towns the center of attention and attendance usually centers on school activities, and in Texas that pretty much focuses on  football. But you already knew that, didn’t you? So what better way to draw a crowd and make some money while encouraging the team, the band, the cheerleaders, the students in the stands, everyone, than a meal before the football game? It’s a win-win situation. What a deal!

Just so you know, this coming Friday, September 14th, the Mules play Levelland here and the freshmen will be serving chilidogs. On September 28th Alpine makes a heck of a road trip to get here and the sophomores will have barbecue brisket sandwiches. October 26th is the Dimmitt game and the seniors will be having my personal favorite, Mexican pile-on. The last home game is November 9th against Littlefield, and the juniors will be serving their turkey dinner, historically one of the most popular meals of the series.

Junior moms are always asked to make pumpkin cake with cream cheese icing for the dessert to go with that turkey meal. I made that pumpkin cake as a parent and a teacher for that meal, and I made two last year when Colten was a junior.  Well, when I was poking around trying to track down the history of the meals, I found out that the original recipe for that cake goes all the way back to Margaret Taylor, wife of Muleshoe principal and coach, Bill Taylor. I thought that was kind of neat that the same recipe is still used today. And the funny thing is that every mother is given the very same recipe, and no two cakes ever look or taste exactly the same! But they are always good.

So for the rest of the season when the game is at home, grab a coat, come early to eat, and then watch the game. It will be fun.