The Moon is Amazing

I hope you had a reason to be out and enjoy the full moon last week. It was spectacular. The moon just has to be one of God’s best ideas. It gives us light to find our way at night; it serves as a marker that a month has passed; it inspires stories of romance, mystery, and werewolves; it kindles a desire for exploration and discovery; it seduces us with its beauty. 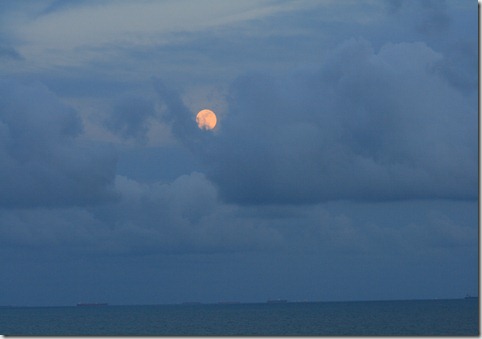 I am sad to report that with this full moon I did not make it outside in time with my camera for any really nice shots as it was making its grand, and as usual, speedy ascent out of the horizon and into the sky. As with sunrises, sunsets, rainbows, and clouds, timing is everything for a good picture. I do have some nice shots taken in the past with my 35mm film camera, but alas, they are tucked away and would be a needle in the haystack search that I just can’t do right now. So I searched through my digital images and found a few to share with you. My night photography is still a work in progress, and these aren’t the greatest,  but I have come to the conclusion that even great pictures don’t really do the moon justice. Especially the contrast made by shadows in darkness, the softness of the silver luminescence, the brightness shining up there in the sky. 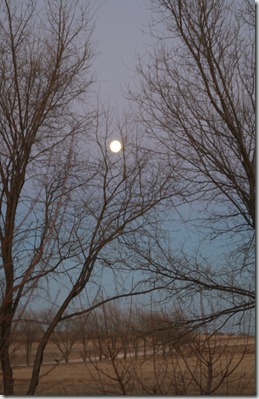 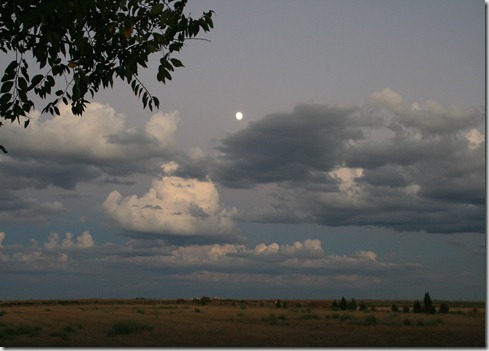 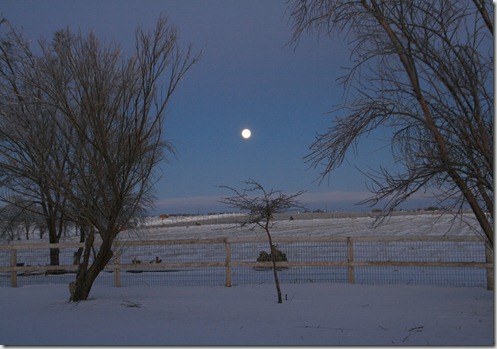 After the night of a full moon and the sky is just beginning to lighten up, the moon makes it descent in the west as the sun is coming up in the east. When I was teaching and would leave the house early, it seemed to mark my path as I drove to school. As it dropped toward the horizon, it seemed to get bigger, the craters were more pronounced, and it was always a pleasure to start the day under the glow of its light before the busyness of the day  stole my attention. These days I seldom make myself get up early enough to relive that sight. But I need to make the effort; that is one picture I would like to have.

I also enjoy driving on a moonlight night. The moon casts enough light that the sky is blue and the horizon makes a distinct line around you. Clouds can be seen drifting by, lights twinkle in the distance, and shapes take form with a hint of color. I remember a trip to Dallas one moonless night by myself on an unfamiliar highway. The darkness seemed to swallow me up; it was unnerving, spooky and most unpleasant. How I wished for some moonlight that night.

This first shot is not the best, but it does show how bright the moon was that night and how it reflected off our metal roof, just like the sun. The second picture was taken at Pagosa Springs, Colorado, on a ski trip to Wolf Creek. 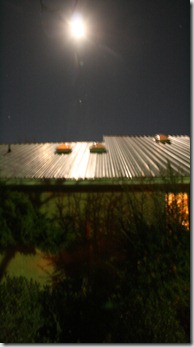 I can understand why man has the desire to travel to the moon, but considering human nature and the tendency to litter, I am not sure that is a good idea. We don’t need to make a mess of it like some people have of  the earth. But I digress; that is another story one of these days… 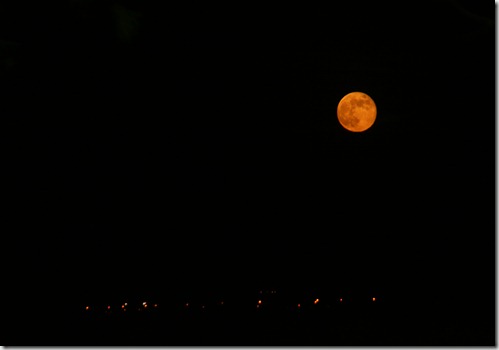 Walter de la Mare wrote a poem about the moon. Perhaps you are familiar with it. My senior English teacher, Ann Sandal, was, and it was in the list of poems we were to choose from to memorize and recite to the class for a grade. My friend Billy Chase, who was always on the low end of achievement in that Honors English class, not because he wasn’t smart, but because he just wasn’t real serious about English, selected that poem for his recitation. He went to the front of the class, turned, and very seriously said, “Silver. By the Lone Ranger…” (Those of you who are too young to know who the Lone Ranger is, ask your mother. Or go see the upcoming Johnny Depp/Armie Hammer movie, although that’s not the Lone Ranger I grew up with.) The rest of the class, right on cue, laughed out loud and thought it was pretty funny. Mrs. Sandal was not amused. Billy had to get down on his knees and beg for a second chance to do it right. She gave it to him, but I don’t remember what grade she was willing to give him. And I suspect, having been an English teacher myself, that after the kids were gone, she laughed, too. Actually, I would probably have laughed right along with the kids. And then made him do it again correctly, too, just like Mrs. Sandal did.

Walks the night in her silver shoon:

This way, and that, she peers, and sees

One by one the casements catch

Her beams beneath the silvery thatch;

With paws of silver sleeps the dog;

From their shadowy cote the white breasts peep

Of doves in silver feathered sleep

A harvest mouse goes scampering by,

With silver claws, and silver eye;

And moveless fish in the water gleam,

By silver reeds in a silver stream.

I especially like the last two lines of this poem because they have such a musical quality-moveless fish in the water gleam by silver reeds in a silver stream-and because the effect that moonlight has on everything it touches is so magical. It is that incandescence, that ethereal glow that comforts the senses. And just so you know, shoon is plural for shoes in some dialects. So the next full moon is expected to rise on August 31st, a Friday. We tend to take the moon for granted; we always expect it to be there, and it always is. This time watch it make its ascent into the sky with a new appreciation. Take time to step outside and experience the gentle shock and awe that the moonlight can create. 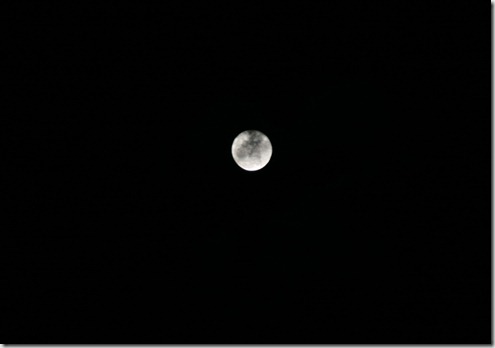 The moon requests your presence.