Meet Me at the Yellow Jacket

If you went to school in Muleshoe from 1946 to 1999, chances are you ate a few lunches at the Yellow Jacket Inn. Or wished you could have. The Muleshoe mascot in those days was the yellow jacket, the school colors were gold and purple, and all grade levels were housed in two buildings in the area where DeShazo Elementary now sits. So when the decision was made to build this eatery with student customers in mind,  it just seemed natural to name it the Yellow Jacket. 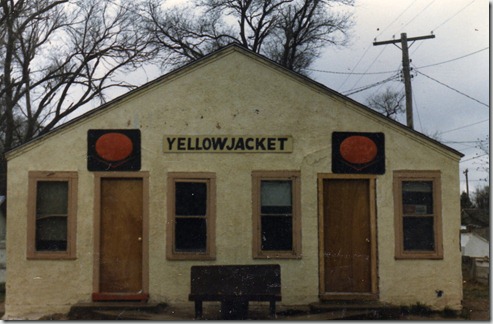 Myriad lunches were eaten there, bought many times, no doubt, with money meant to buy a school cafeteria tray. Owned by Spencer and Phyllis (Border) Beavers, the Yellow Jacket opened for business at the start of the 1946-47 school year. After 18 years, they sold it to Charles and Hazel Ball in 1964, who ran it until 1998 when they sold the business (but not the building)  to Sally Bustillos, who then shut  the doors in 1999  when  the school board voted to close all school campuses at lunch.

After much planning and fund-raising, the building was moved in April of 2011, which was followed by much hard work and restoring. In the beginning kids ate on a long table and sat on benches, which were later replaced with booths. Those booths and kitchen equipment were lost during transit, so the interior may not look just the way you might remember it from your school days, but the workers have tried very hard to restore the look of the place as much as possible and hope to add kitchen equipment in the future. An old Coke vending machine, typical of the era, has been added but was not part of the original decor.  The popular pinball machine that was added in later years and  many remember playing has long ago disappeared, but a replacement might be added later on. But other memorabilia has been donated and is on display inside: pictures, a Yellow Jacket centerpiece, a football jacket, a football jersey, and a football banner come to mind. A display of favorite candy of the period is being compiled, although I doubt the round containers of peanuts with the surprise money inside will be found again. 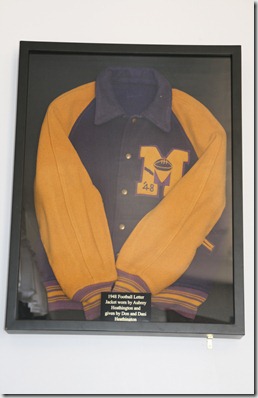 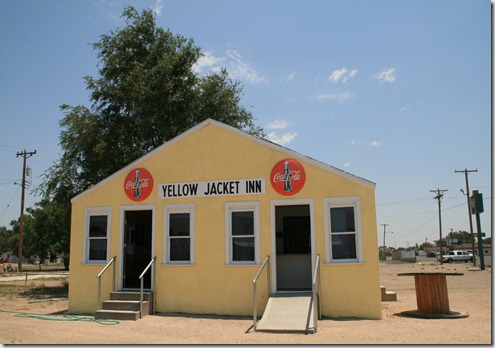 On July 4th, 2012, the Yellow Jacket celebrated a rebirth at its new and permanent home at the Muleshoe Heritage Center. Kenneth Henry, who became the project manager, served as master of ceremonies. The crowd of around 100 people was greeted by Mayor Cliff Black, Irene Mason,  and Chamber of Commerce president Gina Wilkerson, who thanked everyone for their support in moving the building and its memories to the center. Jim Holt, class of 1954, shared some history of the Yellow Jacket. He said he had done some unscientific calculations and figured that between 4300 to 5300 students had shared memories and meals at the Yellow Jacket through the years. 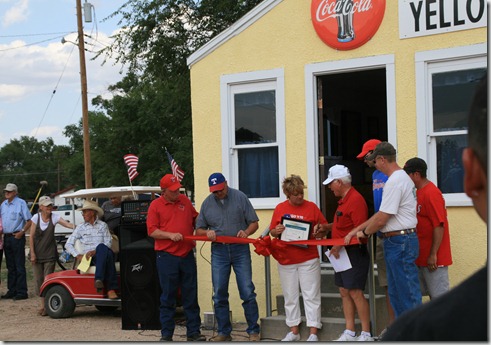 After the ribbon-cutting, hamburgers, hot dogs, Frito pies, and round dogs were served at the Depot as old stories were shared along with the food. 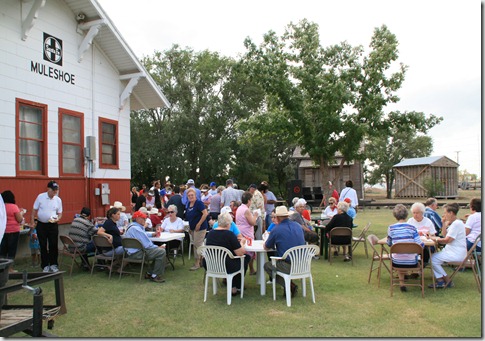 Eleven year-old Tristan Cross from Plano,  grandson of Kenneth and Darlene Henry, was in charge of candy sales and providing rides between cars and the food area. 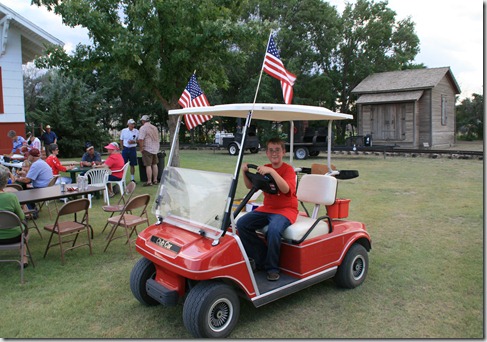 Tammy Enos from Lubbock and Diane and Michael Neel from Wylie, back in town to visit for the 4th, were part of the crowd who enjoyed seeing the restored Yellow Jacket. 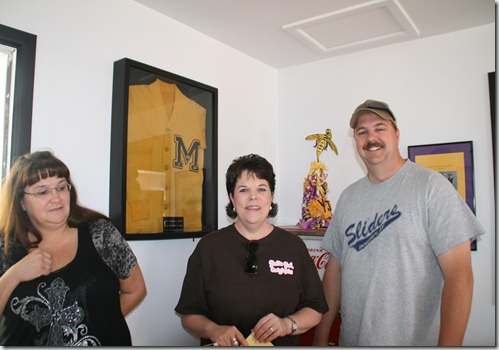 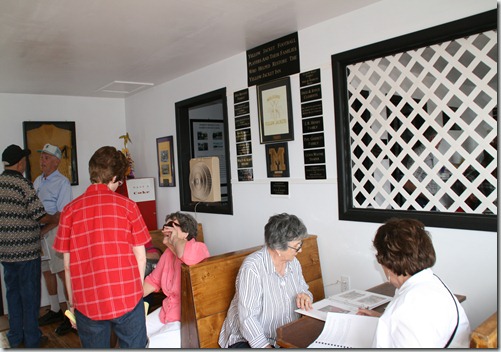 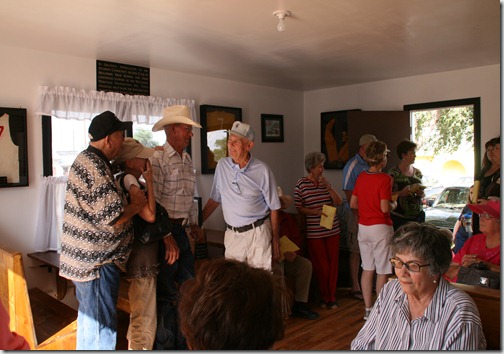 And I found out something that I had wondered about for years. I visited with Mr. Holt, Jimmy Clyde he would have been called back in the day, who shared with me how the Yellow Jackets became the Mules. He didn’t know who came up with Yellow Jackets for the mascot in the first place, but he did know that in 1950 the student body, which had grumbled about a mascot change for years, were given the chance to put it to a vote, and Mules won by a 2 to 1 margin. The school colors stayed the same gold and purple until around 1957 or ‘58 when then Coach Wayne Mantooth, who thought gold and purple seemed pretty inappropriate colors for a team named the Mules, took it upon himself, when ordering new football uniforms, to fix that discrepancy and ordered them in black and white, and that was that!

Businesses and individuals who graciously donated the more than $40,000 needed to move and renovate the building are recognized with plaques inside the building. 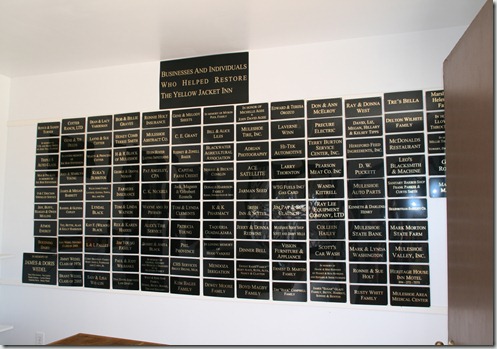 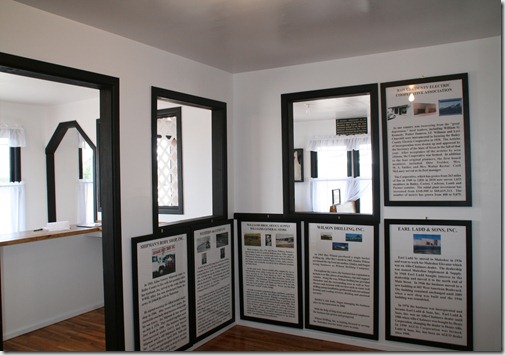 Former students/customers of the Yellow Jacket were asked to contribute memories of their time in the historic fast-food joint for publication in a booklet that is on sale at the Depot for $20, the money from which will be used for upkeep and further renovation of the Inn. A more detailed history of the chronology of the Yellow Jacket is also included, along with short histories of local businesses who donated to the cause. 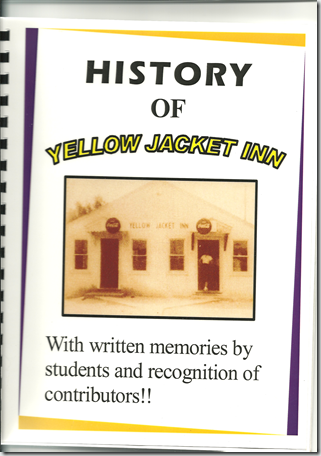 I read through the memories and found, not surprisingly, that the real draw of the Yellow Jacket was not the food, which was remembered fondly, but the freedom and independence that came with being able to leave the school campus and be out of the range of pesky old disciplinarian teachers for even a brief time. It was called more than once a rite of passage. And of a simpler time. I will end with the memory shared by Rama Copley Smalling, ‘65:

–And the rules-enter through door, know what you want to eat when it’s your turn to order and exit through the left door. And we thought there were too many rules! 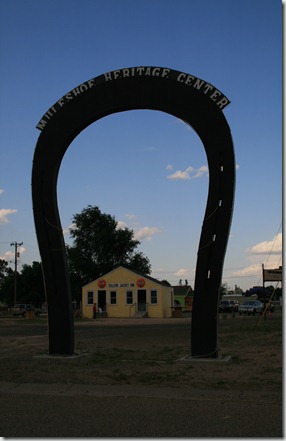 Thanks to Kenneth and Darlene Henry, Jim Holt, Gilrobert Rennels, Dolores Harvey, and Rama Smalley for their help with this article.