Just like the athletes, speech, and one act kids, band, choir, and art can advance and be recognized for superior performance. But the process is a bit different in these areas. Athletic contests make it pretty easy to declare a winner; you run fastest, jump highest, toss farthest, make the most points.  Band and choir are a bit more subjective, and it is conceivable that many kids could be gold medal material. So instead the kids are ranked based on the quality of their performance, and they are awarded a I, 2, 3, 4, 5. Thanks to some talented students and dedicated band and choir directors, we have had our share of kids receiving 1s and qualifying for state in their respective fields. 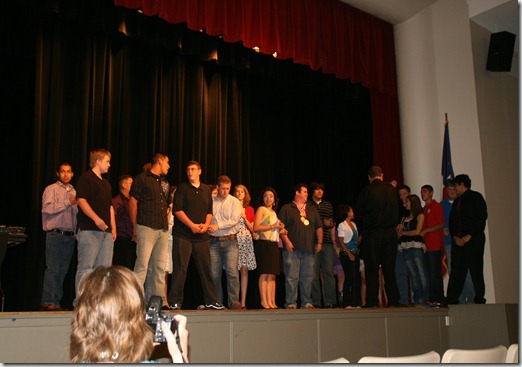 Nick Stephenson handed out many awards to band students at the awards night program on May 24. Band competition includes yearly solo and ensemble competition, as well as  playing with the honor band every other year, and attending state marching contest every other year. This was the year and they received sweepstakes honors by earning a 1 in marching, concert, and sight reading, no small feat. Band director Nick Stephenson says this is the eleventh sweepstakes band from Muleshoe since 1983. When I last talked with him, the band was about to travel to Austin for state solo and ensemble contest, and I understand they did very well. In fact, the other night at the high school awards ceremony when all the results were announced and medals awarded, they, along with choir and speech,  had on so many medals that when they walked off stage it sounded like an invasion of wind chimes as their medals jangled upon each other around their necks.  The outstanding band members this year included Gabby Chavez, Frank Recio, Ryan Johnson, Sarah Whitworth, Kari Mendoza, Michelle Chavez, Miranda De Bruin, Belinda Pacheco, Roman Chavez, Brittany Soliz, Mateo Castillo, Matthew Dickerson, Ace Alvarez, Juan Guerrero, Zachary Taylor, Greg Hernandez, Jenna Whitworth, Robert Brewster, Jordan Russell, and Merced Campos. 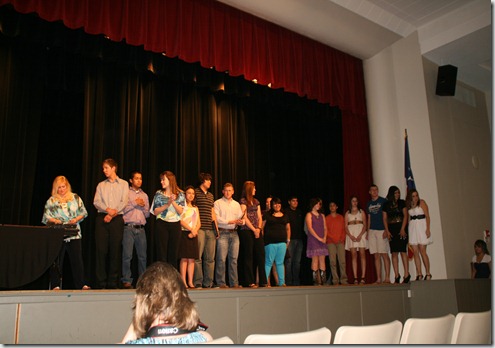 Lorissa Mason handed out awards to choir members at the awards program May 24. 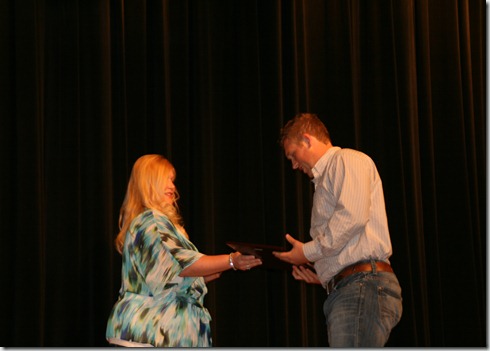 Mrs. Mason and Ryan Johnson, who qualified for the TMEA (Texas Music Educators Association) state choir this year, the first student from Muleshoe to be named to that choir. Choir director Lorissa Mason also had her share of award-winning performances by students competing in solo, ensemble, and madrigal events, and they were awarded medals: gold medal soloists were Isaiah Guerrero, Ryan Johnson, DonAnn Rempe, Mandy Scolley, and Bayne Shipman; silver went to Andrea Alfaro, Bailey Bales, Marissa Hernandez, Jessica Kube, Dalia Melendez, Kari Mendoza, Garrison Myers, Sheridan White, and Cristian Zaragoza; bronze went to Stephanie Infante and Crystal Rubio. Madrigals receiving a division ll, equivalent to a silver medal, were Andrea Alfaro, Bianca Aviles, Bailey Bales, Adrian Estrada, Alexa Fuentes, JJ Gandara, Tessa Garner, Isaiah Guerrero, Marissa Hernandez, Stephanie Infante, Ryan Johnson, Jessica Kube, Jaxiel Lopez, Jose Martinez, Michael Martinez, Kristen McCoy, Dalia Melendez, Kari  Mendoza, Patrick Mendoza, Garrison Myers, Kayla Preston, DonAnn Rempe, Christain Reyna, Jade Rodriguez, Crystal Rubio, Mandy Scolley, Blayne Shipman, Sheridan White, and Cristian Zaragoza. Art has something called VASE-Visual Art Student Exhibit- which is their equivalent to UIL This year art teacher Sandi Chitwood reports that MHS had a bumper crop of gold medal winners at this year’s competition: Alyssa Leal, Stefani Lopez, Alexa Acosta, Bianca Aviles, Lupe Campos, Roper Kerby (two medals), Mandy Scolley, Luiz Ruvalcaba (two medals), and Morgan Burris. Stephanie Vasquez had a piece chosen to be exhibited at the Superintendent/School Board State meeting in Houston this year, which is also quite an honor for an art student. We also have kids compete in something called TACS Academic Challenge, formerly known as Small Schools Academic Competition, which is the small schools’ answer to large schools’ academic decathlon, and we have had success in that competition as well. They don’t seem to fit anywhere else, so I will just include them here. April Smith has been in charge of this contest for years, with help from Vickie Burch and Val Acree, and this year they sent three teams to state and one team placed third-Belinda Pacheco, Michael Martinez, and Camilo Torres. Along with their medals, they were also awarded $3,720 in scholarship money. Not a bad deal at all. So as you can see, Muleshoe High School is well represented in a variety of endeavors, and I am sure there are some I am unaware of and have left out. But not intentionally. This is just my way of saying job well done, and we are proud of you. Being from a small school in a small town in the middle of nowhere is not a road block to success, as these kids’ accomplishments prove. Thanks to Lorissa Mason, Nick Stephenson, Sandi Chitwood, and April Smith for helping with this article.