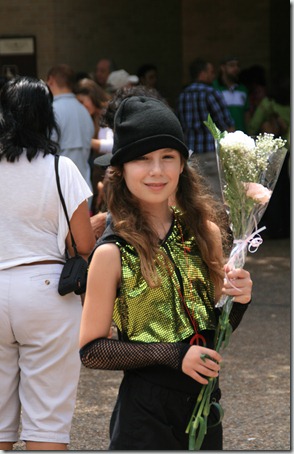 Dancing With The Stars is a big deal right now. Well, not any bigger than our granddaughter’s first dance recital, which we drove down for the other day. The costumes were just as sparkly, the music just as danceable, the dancers just as attractive, the audience just as enthusiastic. It was quite a production. 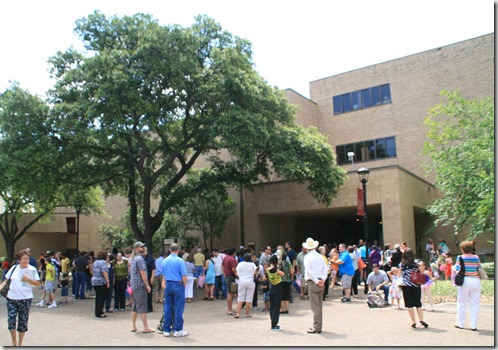 The recital was held at Evans Auditorium on the Texas State University campus in San Marcos. We had not been on that campus  since AJ graduated in 2001 when it was Southwest Texas State University, and while we still had to walk up and down the hills, boy, had everything else changed! Lots more buildings, broad walkways and steps, landscaping. We were impressed. But I digress. We found an empty parking garage, empty since classes were already over for the summer and the student body had evaporated, but a little distance from the recital site. The closer ones were already full from dance patrons. But then that gave us the chance to take in all those changes on campus as we walked to our destination. There weren’t many people milling about-until we walked inside, and then things suddenly got real busy. Parents everywhere, bored dancers waiting for their turn hanging around, vendors selling bunches of flowers to give to the dancers after the performance, vendors selling dancewear, food, t-shirts, programs, videos of the recital; this was a major production. But what was I thinking? We were in the middle of a major metropolitan area, full of potential dance students. Of course it was big. Maya’s recital was one of six sessions of separate recitals, the first one starting at 9 am and the last starting at 6:30 pm, involving 18 instructors, two backstage helpers and sound crew,  and a total of over 600 dancers by the time the last curtain closed. I’m exhausted just thinking about the wardrobe malfunctions, let alone getting each little darling on and off stage in a timely fashion. 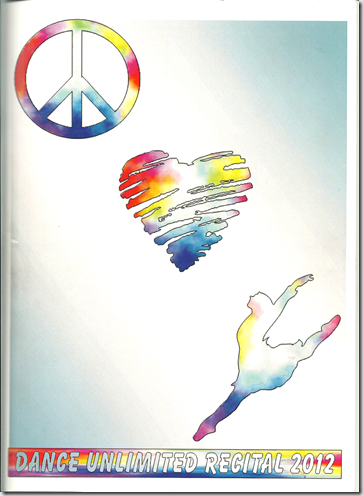 The program: Peace, Love, Dance was the theme of the recital this year. And when you consider that the youngest students were probably three years old and didn’t have a clue what was going on, well, I’m impressed that it went as smoothly as it did. I would guess that about half of them were there because they wanted to be there, the other half were there because Mom wanted them to be there, and all of them, upon seeing the mass of faces intently watching them, had all memory of the dance routines  float up into the stage lights, and they pretty much made it up as they went along. But the costumes were all shiny with sequins and of beautiful colors, so the important thing to remember was how you looked, not how you danced, right? Maya’s dance was of the hip-hop variety, and she remembered her routine-(she was one of the ones who wanted to be there) as did the majority of her fellow dancers, as they were older than most of the little ballerinas,  so her dance was fun to watch. We were told emphatically that there were to be no pictures taken turning the performances, but of course I took the camera anyway, for pictures afterward. Sure, no pictures during the performance. Smart phones were busy all around us, so I just upped my ISO setting  and took some anyway. Unfortunately, my indoors in a huge darkened hall and from the balcony photography skills are still a work in progress, so my pictures leave much to be desired. But I did get some nice shots of her outside afterward. 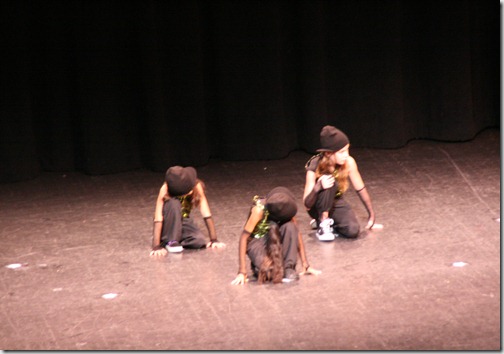 The plan is to take a break over the summer and sign up again in the fall. She will be with a different group next year, as they are organized by age, and she just had a birthday that puts her in the next bracket. So while she is learning new dance steps, I will be working on camera skills and looking forward to another edition of Dancing with my Granddaughter. 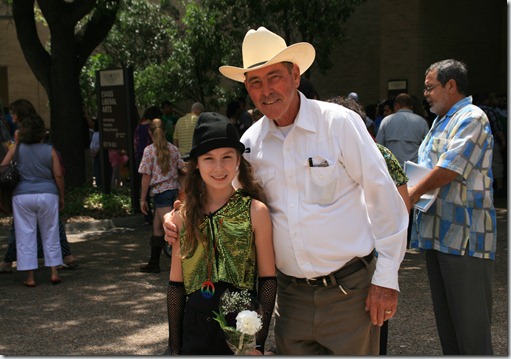 Maya and her grandaddy after her recital was over.