Let’s Put Some Miles on the Car! 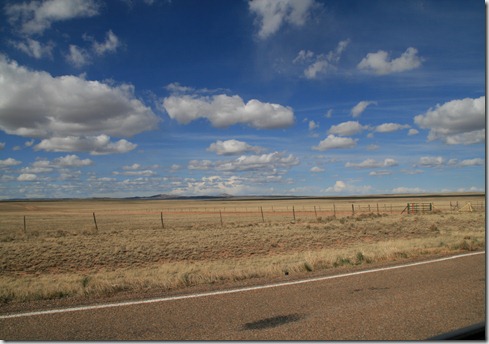 We decided to try a lease rather than purchase this time around and signed up for 60,000 miles for the three years of the lease. That comes out to about 20,000 year, right? Well, we came home with the car last July, and nine months later the odometer registers 11, 449 miles. In the last five days I put 949 miles on it. 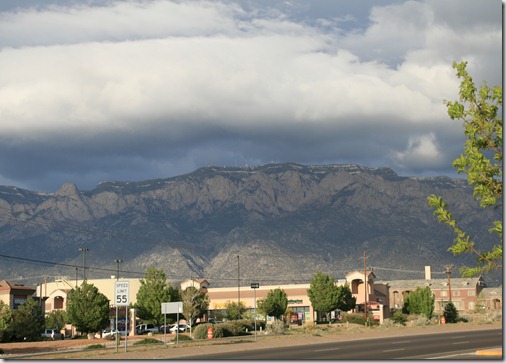 It all started Friday when Hellen, Sheila, and I went to a cactus show and sale in Albuquerque. We spent Friday night chasing down Pappadeaux’s and then spent considerable time figuring out how to get into their parking lot. Turns out we spent lots of time looking for openings in parking lots that would let us in and then out onto the highway and streets. City planners seem to like one opening into large parking lots. We would head in a logical direction thinking surely there would be an opening in the curb, only to find a landscaped strip, so we would drive around again only to find another dead end. And this was all over town. But I digress. After overdosing on shrimp, we checked out a mall, which was no big deal, until we happened upon the Brookstone store which had  this really cool state of the art vibrating/massage chair, and I took its 15 minute test run. Wow. If I had had an extra $3400, I would have hauled it home in a New York minute. We were up bright and early Saturday for the first day of the cactus show and sale at the Albuquerque Garden Center, but not before first eating at the Owl Café, an Albuquerque landmark. We had to kill time until the cactus show and sale opened, so we shopped Wal-Mart. That’s what everyone travels to Albuquerque to do, right? But I needed a big bag of cat food, and we checked out their plants, and found that not all Wal-Mart garden centers are created equal. They have plants we don’t get.  At the cactus show Hellen and I bought some cactus and Sheila enjoyed looking. People who think cactus is nothing more than prickly pear need to check out one of these shows. Colten always says there is no point in shopping cactus any more, that I surely have them all. Not even close. So I course I found some to add to my collection. 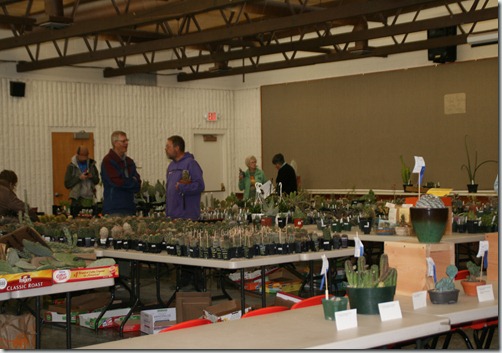 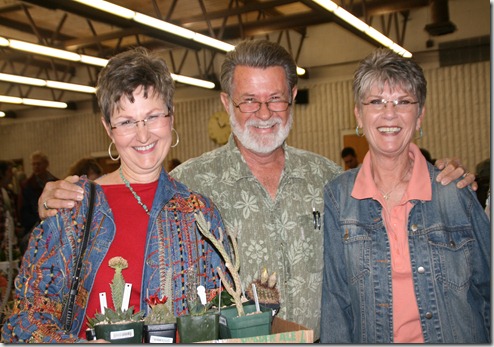 Hellen, cactus grower extraordinaire Woody Minnich, and Sheila at the cactus show. After we were through there, we skipped lunch, having filled up at the Owl Café on breakfast and were saving room for a big dinner that night, and checked out some local nurseries and other shops. When we had hit all the shops we wanted and racked up more miles wandering in the parking lots, we went to the show and saw “MIrror, MIrror” with Julia Roberts. It was a bit slow-paced but worth the price of the ticket. The seven dwarfs were fun. We saw it at a 24-screen theater, which meant the building needed a large snack bar for all those patrons. Well, it was set up much like the parking lots. We nearly didn’t find our way through it to make it to the restroom signs that we could see but couldn’t get to. 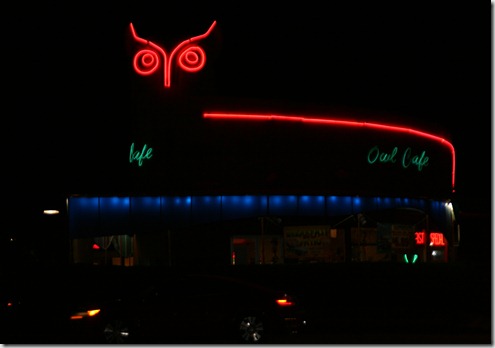 We ate breakfast at the Owl Café, but its landmark neon details show up better at night. 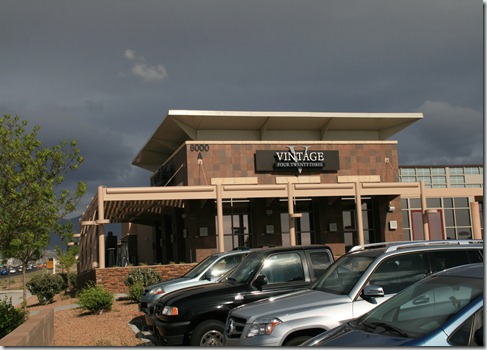 Then it was on to Vintage, a new upscale restaurant where Sheila’s niece, Christy, who also helped designed the place,  is  manager. After that we had time to kill and drove out to Sandia Casino, where we admired the architecture and  dabbled in gambling’, using a promotional gimmick which allows you to play with $25 credit for your one dollar. which was harmless enough fun since after our credit was gone, on which we didn’t win anything, we left. 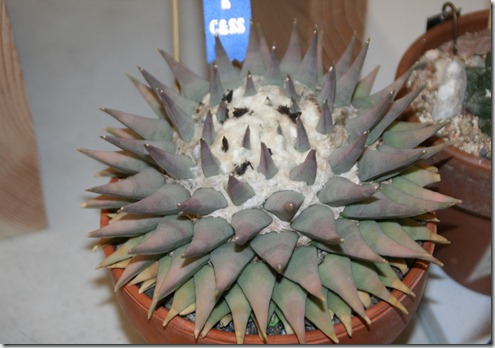 Sunday we hit the cactus sale again, and yes, I found a few more specimens I didn’t have. After that we drove to visit with Christy and see her newly remodeled house, and then drove to Old Town, many miles on the other side of Albuquerque, to eat at La Placita, to which we also had a family tie, this time to Hellen’s uncle. We shopped there before heading home. 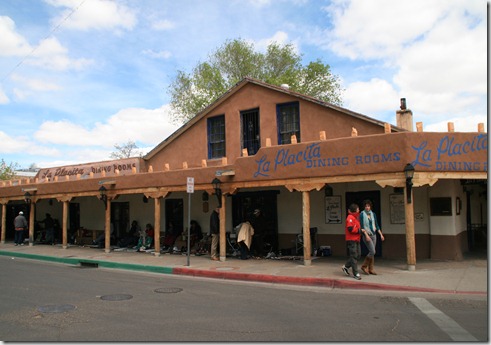 Normally the route taken to Albuquerque, or even Santa Fe, is to Santa Rosa and to I-40. This time we drove from Ft. Sumner to Vaughn, Encino, Willard, Estancia, and Moriarty before having to drive on I-40, which is always heavily trafficked and gives me claustrophobia when I get sandwiched between the trucks. The way we went may be a bit longer, but, oh so worth it. We had the road to ourselves and the view was nice. So that was the trip to New Mexico. Then Tuesday we made the drive to Odessa to watch the Mules play regional golf at Ratliff Ranch Links. They had a good day Monday, but Tuesday didn’t go quite so well. They had a good time, learned some lessons about golf, and built lots of character, so it was worth the trip. 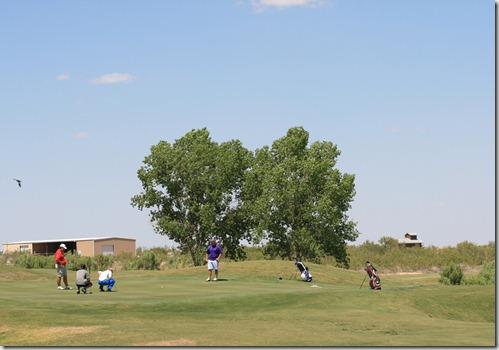 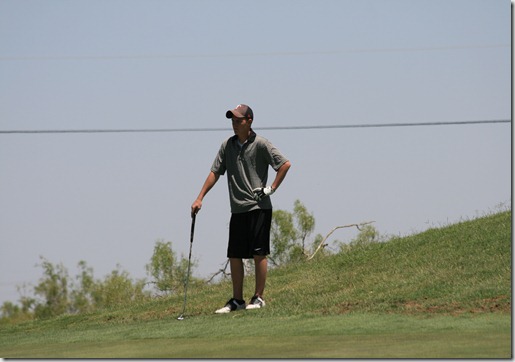 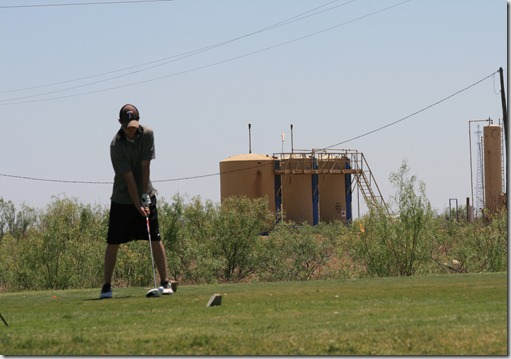 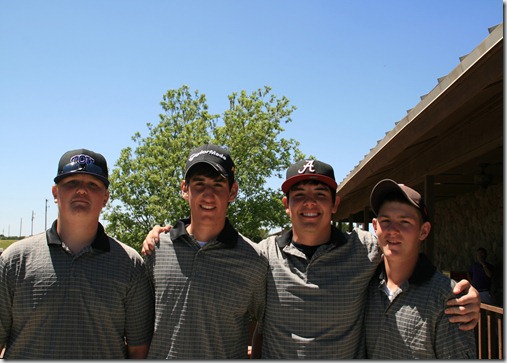 The Muleshoe golf team is Matt Dickerson, Eli Leal, Beau Avila, and Colten. Mateo Castillo is also on the team but had already left by the time I gathered them all up for a picture. My behind is always numb after these road trips, and it does add the miles to our mileage limit, but we didn’t bring that car home for it to sit in the garage. It needs to be tooling about doing what it was built to do, and I am certainly not one to want an unhappy car… So time will tell. I haven’t decided where to go next.