I can’t remember how old I was, but I am guessing in the neighborhood of six or  eight or so, when I told my mother we needed a manger scene to properly celebrate Christmas, the whole point of which is supposed to be  the birthday of Jesus. I can remember going to the dime store in downtown Rosenberg to buy our first family nativity set. All lined up neatly between glass partitions were rows of  Wise Men, camels, shepherds, sheep, cattle, donkeys, Marys, Josephs, and little baby Jesuses in their hay-filled mangers. Next to the rows of plastic characters were the  cardboard stables in which the birth unfolded. I chose one of the simpler models with a blue-glittered star on top and make-believe hay glued to its roof. Mary, Joseph, and Jesus are of course the stars of the drama, and I picked them first.  Then the Wise Men have to journey to the manger, so they and their camels were next. The shepherds were there, too, so I chose two shepherds. But the fun part was the animals who witnessed the baby’s arrival, so I loaded up several sheep and lambs, a cow and calf, and a donkey. Once home with my treasures I set up the manger on part of a sparkly cotton tree skirt and added cut-up pieces of straw excelsior for hay on the floor of the stable. Then Mother appeared with a short electrical cord with a blue night-light bulb screwed in the socket to put in the back of the manger to cast a soft light behind the Holy Family. For years after, through school, college, and the early years of our marriage,  the manger was set up the same way at Mother and Daddy’s house,  save for numerous changes in the staging of the animals and people around the baby Jesus. At some point the manger came to live with Bill and me and the kids and became a tradition at our house.  The cotton skirt yellowed and fell apart; the excelsior dwindled to nothing.  The cow and calf disappeared, and I am down to one sheep and lamb. The  shepherds wandered off most recently, but the basics are still here. The cardboard stable is getting wobbly, and the star has lost most of its glitter. Even though the little dime store diorama is at least 60 years old, it still finds it way out of the box, still finds a place to be set up, and still reminds us of the night Jesus was born. 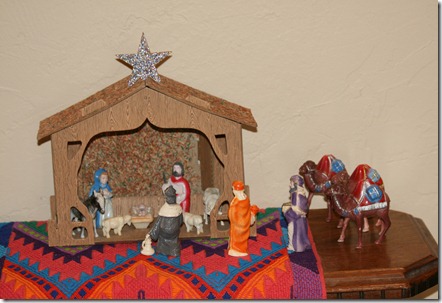 But for me, it means something else as well.  It will always remind me of  my Christmases past, the memories made,  and the people who loved me.