Back in the late ‘70s a  trip to visit Bill’s Aunt Ruth and Uncle Leroy Berggren at their  farm between Farwell and Bovina took us through Muleshoe and by the Mule Memorial. We piled out of the car and took your typical tourist picture with the mule. Who knew that in 1980  we would move to Muleshoe and drive by that mule every day, sometimes more than once! 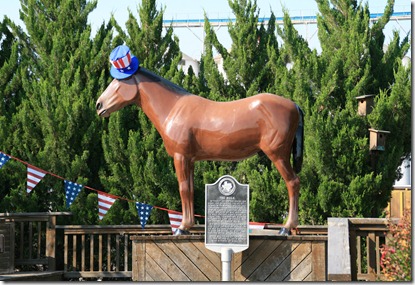 So I wanted to know  Ol’ Pete’s story, which started, interestingly enough, not in Muleshoe, but in Ft. Worth, Texas. Time has passed and most of the principal players are gone, but this is what I can piece together. It seems writer and historian V. H. Torrance  from Austin, upon visiting the Ft. Worth Fat Stock Show,  lamented the absence of mules at the event and the mule’s  demise from the American scene and wrote about it in the Ft. Worth Star-Telegram. Dr. J. B. Barnett from Marlin, after reading the story, saw the need for a memorial to the hard-working mule and sent a contribution along with  a suggestion that a mule memorial be erected at the Will Rogers Coliseum in Ft. Worth. Then George Dolan,  a columnist for the  Ft. Worth newspaper, wrote about receiving the contribution and suggestion, which was then read by Gil Lamb and Carroll Pouncey, Pouncey being the Muleshoe Chamber of Commerce manager at the time. Lamb and Pouncey wrote to Barnett and Dolan  arguing why a mule memorial should be in Muleshoe instead of Ft. Worth.  I think it was about this time that Mrs. Middlebrook’s 4th grade class at DeShazo Elementary gathered donations, and student Cindy Smith sent the money and yet more arguments to Mr. Dolan  for why the memorial should be in Muleshoe. 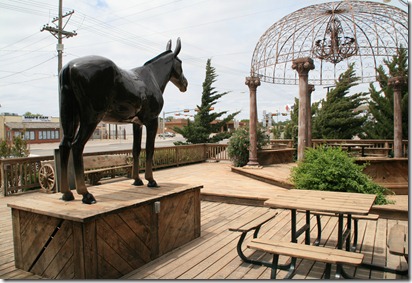 At this point Dr. Barnett traveled to Muleshoe  and enjoyed the red carpet treatment as  Gil Lamb presented him with myriad reasons why the memorial should come to Muleshoe. Dr. Barnett was introduced to Gil Lamb’s Mule Train on KMUL, shown Lamb’s mule collection, told about the Muleshoe Ranch and the fact that highway 84 ran right through town and all travelers would be exposed to the mule. Convinced, Dr. Barnett helped organize the National Mule Memorial Association. To  get the word out about the desire to honor the mule for its many contributions to the development of early America and its role in our early war efforts, Gil Lamb also wrote a story carried by the AP wire service, which gave it international exposure, even being carried in the Stars and Stripes newspaper read by our soldiers overseas. Many soldiers even sent in donations themselves.

When the West Texas dust cleared, over 700 donations had come in from all over the world, but ironically, not many from Muleshoe. Most of the donations were small, something like $5, which also earned the contributor a membership card in the National Mule Memorial Association. I didn’t discover what the final total came to, but I know it wasn’t enough for a bronze statue, which was what the association first desired. A bronze statue was cost-prohibitive, so  things were stalled briefly, until someone from the Fiberglass Menagerie company from California came through  town and convinced the association that fiberglass, which was fairly new at the time, having been developed during WWII to replace molded plywood used in airplane radar domes, was indeed durable and strong enough to be suitable material for making the mule. He showed examples of their work, and it was decided that fiberglass would work. 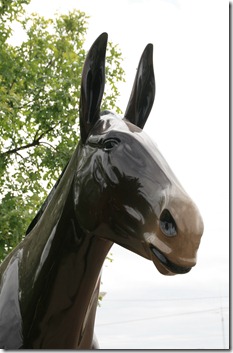 An actual Muleshoe mule named Old Pete owned by Dave Anders was photographed to be used as the model, and sculptor Kevin Wolf from Aurora, Colorado, set to work on the statue.  When he was finished, Jim St. Clair flew out to California to approve the completed design and also donated  a large building block  that came from the St. Clair Department store for the statue to stand upon. The memorial was  placed near  the Santa Fe Depot in the depot’s  original location at the corner of American Boulevard and Main Street. Cecil Davis saw to it that the memorial had an historical marker. 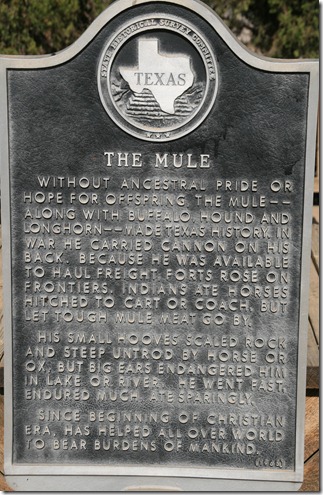 The dedication was set for July 3rd, 1965, as the 4th was on a Sunday that year, and back then the Sabbath was still held sacred and no major events were scheduled on a Sunday. Two days of activities were planned for that time, leading up to the dedication of the memorial on the 3rd.  Around 10,000 people were on hand for the  gala affair, including then Texas Attorney General Waggoner Carr. Dr. Barnett, without whom the memorial might not have ever existed, regrettably had died earlier and did not get to see the memorial become a reality. 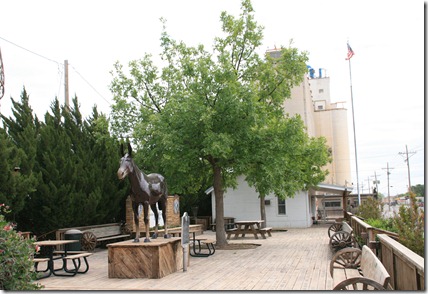 Ol’ Pete stood at his original location for many years sort of by himself, and then he became a part of the structure where he now stands. Here’s how it went, I think. The land for the mule memorial had been deeded to the city by Santa Fe Railroad. The Depot that stood nearby had been closed in the 70s and Santa Fe wanted to give away the depot and move it in the 80s, which led to the building of a new Chamber of Commerce office and visitors center in that location  in 1999. Ol’ Pete was going to have to be relocated for all that to happen, and because  he was a state-certified memorial with a marker, permission had to be gained from the Texas Historical Commission. They finally agreed when it was determined that it would  involve a move of  only a  few feet. The stone from St. Clair’s was replaced, and Ol’ Pete and his historical marker were moved to what his now his permanent location on the deck of the Hugh Young Visitors Center and Chamber of Commerce office which was dedicated on July 4, 2000. 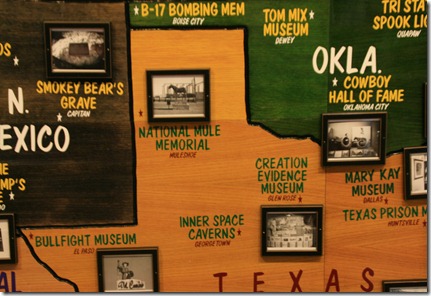 In the Denver airport, the Mule Memorial is shown on this large map of the United States that highlights places of interest in all the states. Note that this is an early photograph of Pete in his original location. 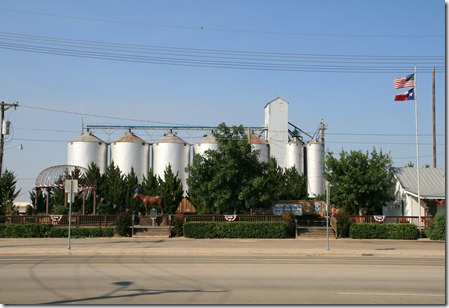 My kids would always scoff at people who stopped to take a picture with the mule. I told them not to laugh too loud, as somewhere tucked away I had that same picture of them with the mule. Ol’ Pete is a constant ambassador for the town and serves us well. He has been pictured and written about in several magazines, including recently in  Texas Highways. In fact, he has even traveled out of state on occasion, and I will tell you about that in next week’s edition, as well as one incident that is legend in Muleshoe.

More information and photographs of the Mule Memorial Dedication can be found in Tales and Trails of Bailey County, the first 70 years. Taylor Publishing Company, Dallas, TX., 1988.