How ‘bout That Haboob!

According to Wikipedia, a haboob is an intense wind storm that occurs in Africa, India, Australia, the Middle East, America, heck, anywhere it is arid and sandy. Arid and sandy. Well, no wonder we had one yesterday. Straight out of the dust bowl.

This is what it looked like as it rolled in behind Park View Nursing Home in Muleshoe, around 4:45 pm on October 17, 2011. Jack Rennels shared this photo with me. 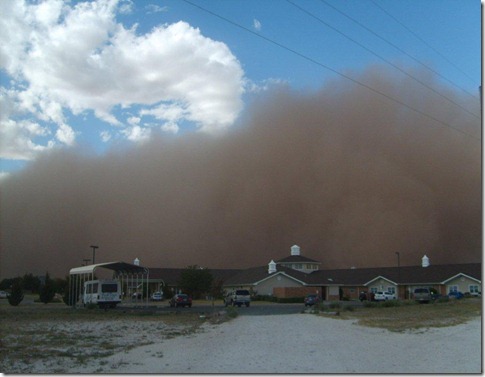 Bill was gone at the moment, so grandson Colten was helping me move my cactus inside for the winter, and we were almost through when I looked up and here comes this huge  rolling wave of dirt. By the time I could get the camera we were enveloped in this brownish-red cloud of grit and reportedly 75 mph wind. The good news is that we were finished moving in the plants; the bad news is that since we were busy, we really didn’t get to witness the progress of this thing from the beginning but found ourselves smack in the middle of it. 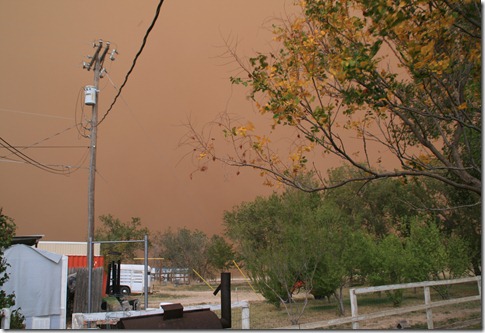 I said we had moved all the plants; in the turmoil I had forgotten the five pachypodiums-Madagascar palms-behind the garage. We realized this as we watched from the back patio door when the wind blew over my tallest palm, after which I shoved Colten out the door to help me move the rest of them into the garage. Note the tallest one next to the eaves of the house. 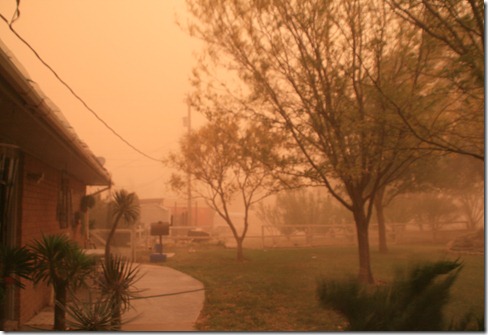 Now note the tallest plant after it came crashing down in the wind! When we first came into the house and the storm was at its height, it was eerily dark and spooky inside. Sunlight was completely cut off by the blanket of sand between us and the sun. And the wind was still howling. The cloud of dirt and dust displayed a whole spectrum of browns, from beiges and dark browns to reds and almost black before blowing through enough to leave the whole sky just a smoggy, dirty yellow- brown. The cold winds lingered, however, even after they had carried the dirt somewhere else to do its display of shock and awe. 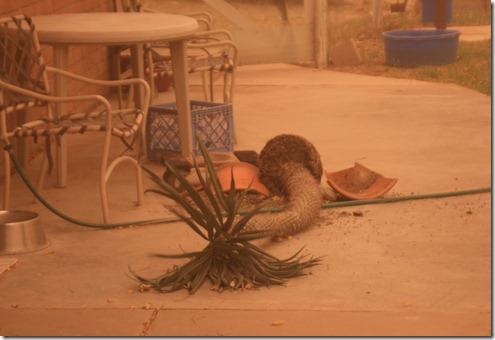 We moved into this house in 1982, and I used to run a mile down the dirt road that borders the  north side of the house, the road itself running east and west.  I can remember one day on the return trip hearing a loud booming sound to the north and looking up to see a wall of dirt on its way toward me. Thank goodness I was almost to the corner and to the house, because by the time I could make it in the door, it hit. Coming from the land of live oak trees and loads of rain, the Gulf Coast of Texas, I had never seen anything like it.

Now I have seen two. And that’s enough! Learn more about haboobs at       http://en.wikipedia.org/wiki/Haboob