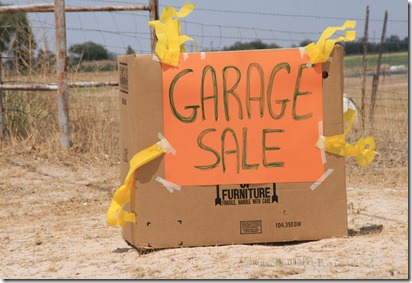 The time had come to deal with all the stuff we had culled and moved out of the house for the remodeling project. And while we were at it, I decided to tackle the mounds of forgotten treasures in the attic and in my side of the barn. Oh, and don’t forget the furniture  and stuff  that has been accumulating in the container. So, what does one do with 30 years of  things inherited from parents’ homes, your kids’ forgotten treasures, changes in one’s own decorating forays, and a lifetime of  consumer consumption? Well, a garage sale, of course! And what better time to have one of these American institutions of high finance? During a period of 100+ degree weather and drought, right? 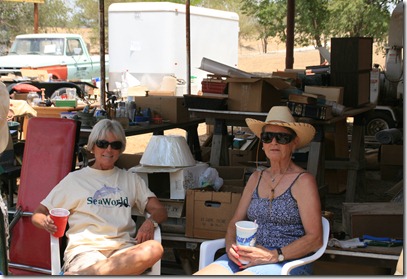 My friend Sheila put some of her things out for the sale and kept me company as we enjoyed the 110 degree day. Misery loves company, so between our extended philosophical discussions, consumption of  mass quantities of liquids and ice at an alarming rate, and visiting with our customers, the day wasn’t half bad. And we made some money while passing along our dust-covered treasures to new owners. What a deal. 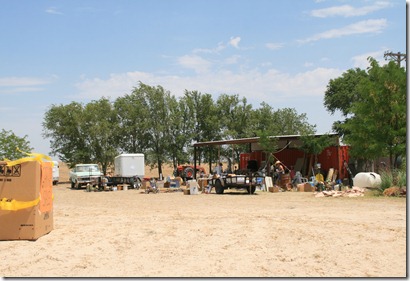 All that tan-colored ground you see is pure sand. In a non-drought year that would all be native grass and green. 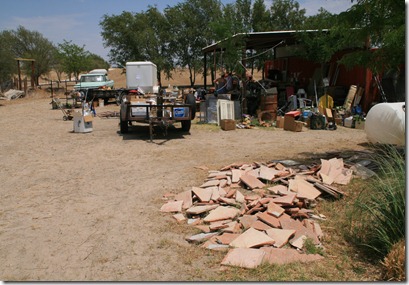 We had the usual garage sale items, along with awkward things, like a pile of Mexican tile from the remodeling that I sold for a whopping $15 that Bill said he would have paid someone $20 just to haul off, and the rolls of carpet, which also sold,  but some stuff you don’t always see. Like the giant picture frames that used to grace my classroom walls that were  filled with snapshots of my former students and which one of those former students bought –for the memories. Or the chicken coop made into a glass-topped coffee table, which no one bought. 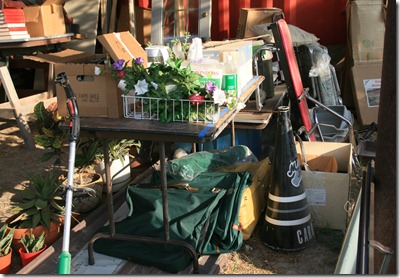 The hardest things to let go of, however, were like those big picture frames, things that held memories gathered over a lifetime:  Caroline’s cheerleading megaphone; AJ’s poster-sized picture of his high school football team; a doll-sized trunk full of doll clothes Mother labored over for my Christmas gift one year; my toddler-sized rocking chair, childhood books read over and over. 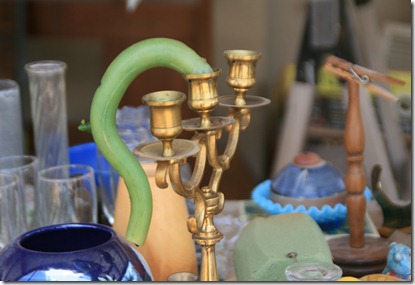 Then there were the really inane things that made us laugh and giggle: the boxes and boxes of candles I kept unearthing-and then those same candles that melted in the heat-the box full of those square glass canisters everyone seems to have at least one of; baskets and more baskets. I also came to realize one more way I have become my mother, not a bad thing, really, but no telling how many sets I found  of napkins with either a tablecloth or placemats to match that she had made, and which we used all the time as I was growing up. Now, I don’t sew like Mother did, but I do seem to have that same desire to create things. For her it was sewing,  needlework, painting, and cooking; for me it has been needlepoint, scrapbooks, gardening, and yes, cooking. The bad part of that need to create, however, is that I had piles of stuff, like artificial flowers that I had every intention of making into these beautiful wreaths and table decorations, which of course, never saw the light of day, and which no one else wanted to fool with and buy, either. 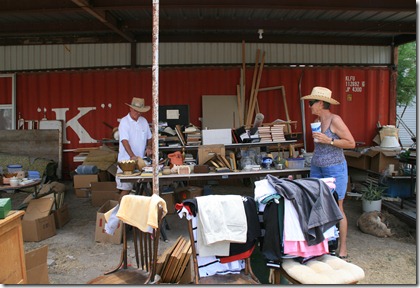 But the sale was a success. The big items, like Bill’s old work truck and my old Mercury Cougar, the tile and carpet, and lots of little stuff all sold. I also believe that the recycling and reusing of garage sale merchandise is a good thing. Waste not, want not, right?  And in the tradition of be careful what you wish for, we finally got a good thunderstorm that drenched all of the left-over stuff that had not been taken to the thrift shop yet. And that’s okay. We made money; we visited; we cleared out a 30 year accumulation of things; we trekked down memory lane, and we had rain. Garage sale tags-nickel and dime; all the other stuff-priceless.