Back in 1994 the Muleshoe Heritage Foundation needed a fund-raiser. Lonnie Adrian, a bicyclist himself, hit upon the idea for a bicycle event. The Tour de Muleshoe has gone through some changes since then, but it still exists and still makes money for the foundation. 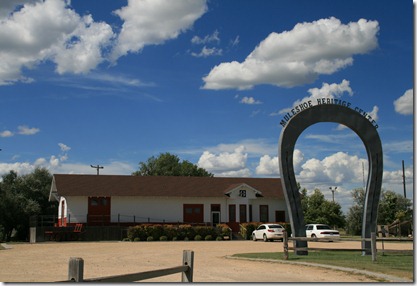 The Santa Fe Depot is headquarters of  the Muleshoe Heritage Center; the Heritage Center being where the race begins. Originally the tour included a Lance Armstrong Junior Olympic Race, which involved riding in two events, a 40-mile road race and a time trial, which, if a person made enough of these functions and accumulated enough points, might qualify him or her to be considered Olympic material. Staging timed races, however, is more costly than just a riding event, and since this was for the purpose of raising money for the foundation, the races were dropped and the rides were continued. No one seemed to mind dropping the race because the  tour has grown from 55 riders that first year to a record 317 last year, with riders anywhere from 6 to 82 years of age pedaling down the highway for ten miles, 40 miles, or 100K (60 miles), stopping at one or more of the four rest stops along the way, and then getting to eat a high carb meal of spaghetti when they finish up at the Bailey County Civic Center, which is also their starting point. Besides all the free sweat, for the $25 registration fee, riders get a t-shirt, water bottle, goody bag of small items from local merchants, the meal, and a chance to win door prizes also donated by local businesses, and if they pre-registered, a chance to win a $500 door prize. The only requirement to be a rider? A safety helmet must be worn or you don’t ride. Period. And the tour is not in the business of supplying riders with helmets. So BYOH. 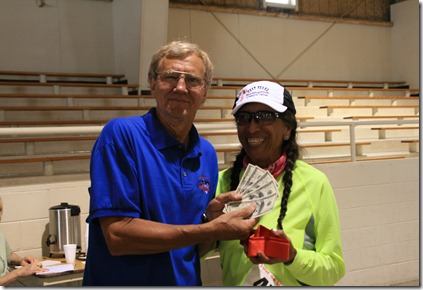 P.J. Sullivan from Lubbock was the winner of the $500 this year. Presenting her with the loot is Lonnie Adrian, who conceived the Tour de Muleshoe and has organized it for the past 17  years. The ride is always held on the Saturday of Father’s Day weekend so there will be no conflict with some other ride or race. It has never been rained out nor called off because of heat. One interesting thing about the tour is the awarding of the Timmy Harendt Scholarship to someone who has been hurt or sick during the year who managed to recover and ride in that year’s tour.  Lonnie Adrian’s nephew, Timmy Harendt, spent his senior year of college at Hardin-Simmons battling cancer, recovered, and rode in the next Tour de Muleshoe. He is now 29 and tries to ride each year that his schedule permits. The Adrian family identifies a deserving candidate and  supplies a $100 scholarship to that person for overcoming their difficulties and his or her  participation in the tour. 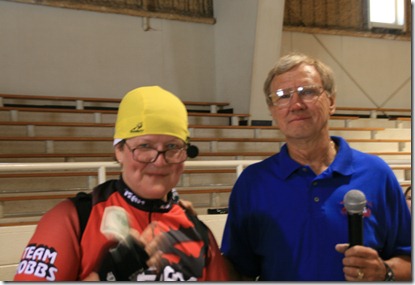 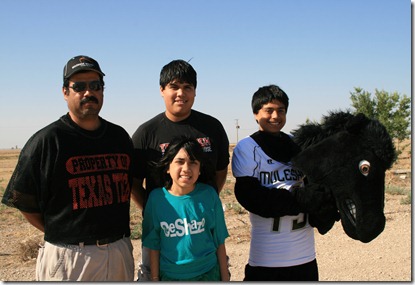 Fabian Martinez and his children Michael, 17, Jose, 14 (this year’s Muleshoe mascot), and Nadia, 11, have manned a rest stop for the past six years. Fabian said it is fun visiting with everyone while offering them fruit, wet towels, and drinks. Michael prepares fruit for the riders. 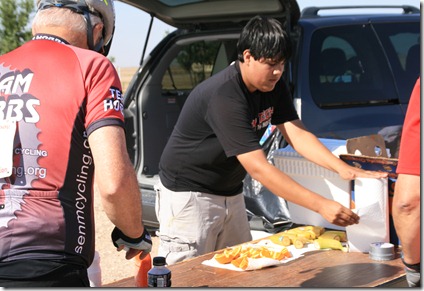 Jose cheers the riders on. And what’s a rest stop without a potty? 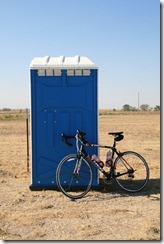 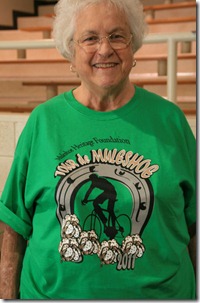 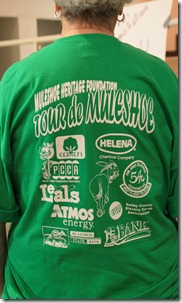 The riders are organized and lined up inside the civic center and when everything is ready, normally around 9 am, off they go out  the west end of the center  in a blaze of color. They have a police escort all the way down American Boulevard (Highway 84) to our one red light, where they turn north, go over the railroad tracks and are on their own to ride the route they have chosen. 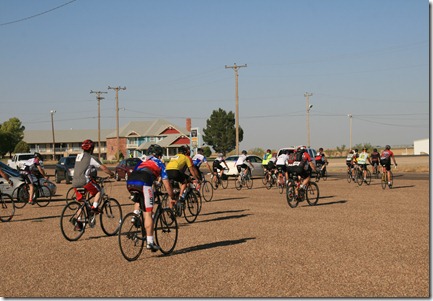 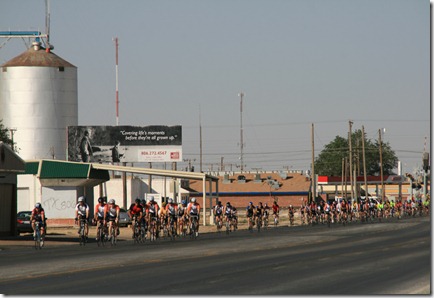 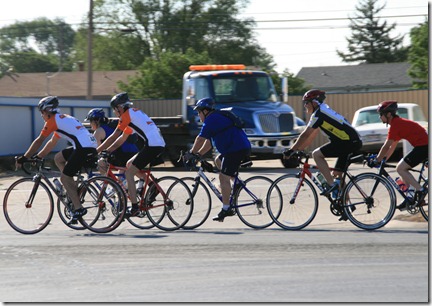 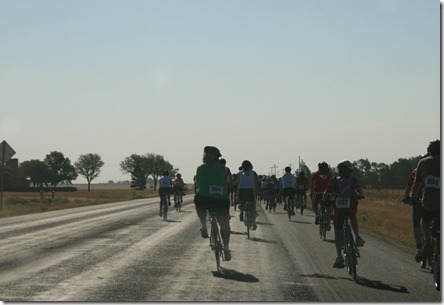 Back at the civic center, the meal is prepared and waiting the riders’ return where they can chow down and hope their name is drawn for one of the 20 to 30 door prizes that are given away when everyone finishes. Christi Sampson cooks the spaghetti and sauce or the meal. 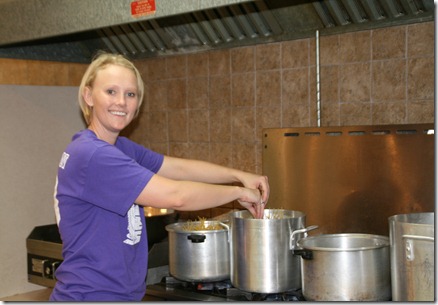 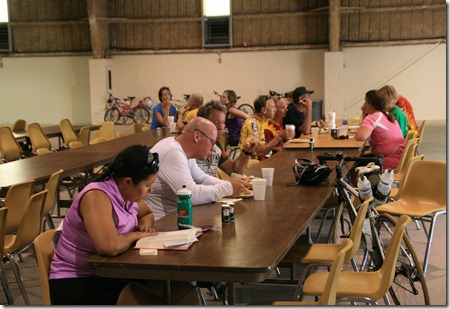 And people eat throughout the afternoon. David and Liz Tipps from Muleshoe were gearing up for the ride when I showed up this year. I asked David why they rode, and he said they just enjoyed the ride and visiting with everyone. Liz, who is a nurse, also made the comment that she was encouraged to see so many women taking part, since bike riding is good cardiovascular exercise and heart disease is the number one killer of women in the U.S.  Donnie and Debbie Proctor from Hereford were also preparing, so I asked them why they went to the trouble to come over and was told pretty much the same thing-it’s fun to ride their bikes and share in the camaraderie. Participation was down a bit this year, I’m thinking due to gas prices,  with 262 riders showing up, but that is still a good crowd breezing down the road. The bank thermometer said it was 94 degrees when I left the civic center around 2 o’clock,  not as hot as it could have been, and the wind wasn’t blowing people off the road, and only one or two riders had to be rescued due to mechanical breakdowns, all of which made for a successful day. 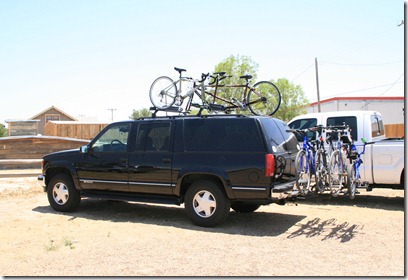 So next year about this time if you are looking for an excuse for a road trip, dust off the old bike and head for Muleshoe. Even if you decide you don’t want to ride, you can treat yourself to a nice spaghetti meal and make new friends. According to Delores Harvey, secretary and tour guide at the center, the oldest rider this year was 75 year-old  Jim Dixon from Friona. And believe it or not, the people who traveled the farthest to get here were from North Pole, Alaska! We don’t know if James Lapointe and Jeremiah Lapointe came all the way to Muleshoe  just to make the tour;  perhaps they were here visiting or something, but nonetheless, they came a heck of a long way to get here for any reason. And one last shot- in the middle of  town on American Boulevard/ Highway 84 traffic was slowed down and backed up for a couple of the last riders, and not far behind, a combine in the parade of vehicles. Just another day in small town Texas. 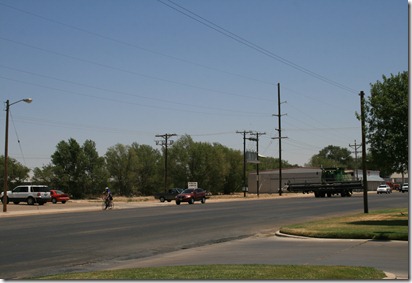