Colten Goes to the Prom 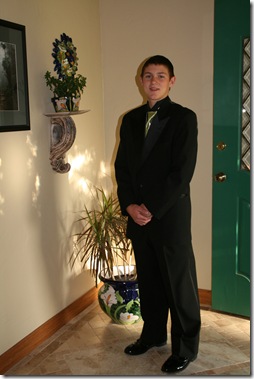 Colten had an interesting experience this year, as he was asked to the prom, a neat treat for a sophomore.  Bianca Aviles, a junior, invited him to be her date, and her friend Jennifer Vasquez, also a junior, asked Jaxiel Lopez, who happens to be a friend of Colten’s, so they all went together. When he told me about it, I reminded him that it would be a photo opportunity for me that I wouldn’t want to miss. (I bug him –and all my kids and grandkids- taking pictures of  various pursuits.) I also threw the fear of a grandmother with a camera in him when I told him that either he let me take pictures of them all before going, or rest assured that I would show up at the prom to take them.   And he told me smugly, “They won’t let you in there,” to which I even more confidently replied, “Oh, YES they will. I’ve been to more proms than you are old, and I promise you I will be there and I will take pictures,” and at that point he realized I meant business and gave in. Ha. That was a hollow victory. Nothing went according to plan that night, other than he did attend and he did have a wonderful time. Which, of course, was the whole  point. But my picture-taking was not what I envisioned. To begin with, sophomores aren’t invited to the Junior-Senior Banquet, which takes place  right before the prom. Both events are held at the school cafeteria, or commons area I think they now call the renovated cafeteria area. The banquet is held, the kids clear out, the tables and chairs are pushed up against the walls creating a dance floor in the middle, and then the kids come back for the prom and can bring dates who are not necessarily juniors or seniors or students at Muleshoe. I think years ago they started this tradition of both events being on the same night to get the biggest bang for the bucks out of the decorations, which are there for both the banquet and prom. But I digress. But that is where things started to go wrong, according to my schedule, at least. Bianca comes early to get her corsage to compliment her dress. Colten isn’t dressed yet, so all I can do is take her picture, thinking I will get them both when she comes back for him after the banquet. 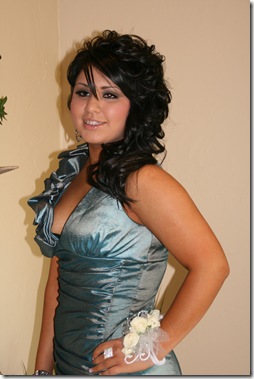 He gets dressed much earlier than he needs to, and all the waiting and trying not to sit down and get cat or dog hair on his tux makes him nervous. But I get pictures… 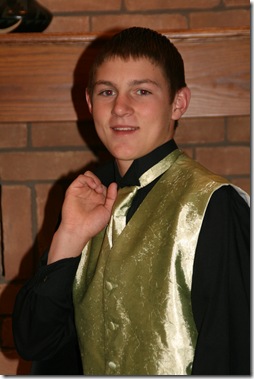 The plan was to make a grand entrance on Bianca’s dad’s tractor, which didn’t happen. The grand entrances are always made in the daylight going to the banquet. And I don’t know if the girls rode the tractor or not. I just know the four of them didn’t go to the prom on the tractor. Now for those of you who are urban-dwellers, riding a tractor to the prom most likely sounds a bit goofy, but it happens more than you might think. Anyone can hire a limo; not everyone has a tractor. We have kids coming in limos, too, of course, but the more flamboyant stars try to come up with something more original, and tractors are just one of the options we have seen. Anyway, the tractor ride didn’t happen, the kids were in a hurry when they came for Colten, and he raced out to the car, and I didn’t lay eyes on the four of them together. No picture. But a promise is a promise, so I didn’t go to the prom and chase him around taking pictures. I did go that afternoon, however, after the decorating was done and slipped in through the cafeteria and took pictures of the decorations. At least I have that. 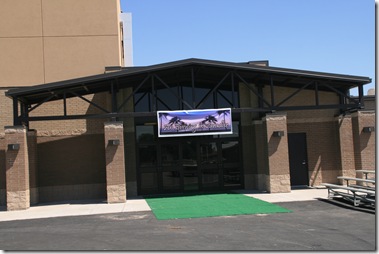 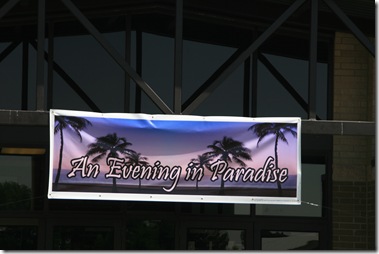 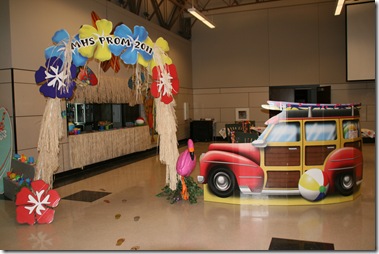 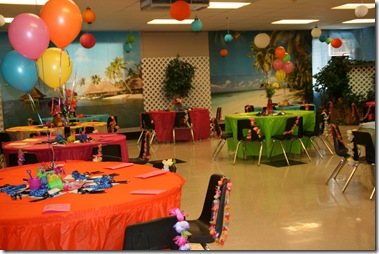 I still thought I had a chance at getting a picture of him with his date as he was given money to have a picture made at the prom. We always have a photographer set up to take pretty shots on location for a good memory picture. Well, apparently that didn’t happen, either. Seems he and his friends just took silly group shots rather than with his date. 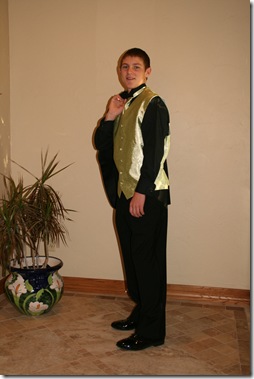 Next year he’d better be prepared. His other comment to me when this all started was something about do I just sit around and try to think up ways to make his life miserable, to which I, of course, said yes. Next year stalking him at the prom for a picture may just happen. Ha!