Pretty in Pink-the Shirt, That is, Not the Movie

October is Breast Cancer Awareness month and the Bailey County Relay for Life committee was pondering fund-raising ideas. Since pink is the color  linked to  breast cancer,  they came up with the idea to “pink out the stadium” at the next home football game. Stephanie Geel, the Relay team chairperson,  said, “It’d be cool if we could sell t-shirts,”  but committee chairperson  Rhonda Myers   reasoned they might not be able to pull it all together, as time was short with only ten days till that home game, and it might not work. But they called Hellen and Lonnie Adrian at Graffi-tees anyway, and they agreed to help them try. Hellen came up with the design, Lonnie printed the shirts, and the project was on. 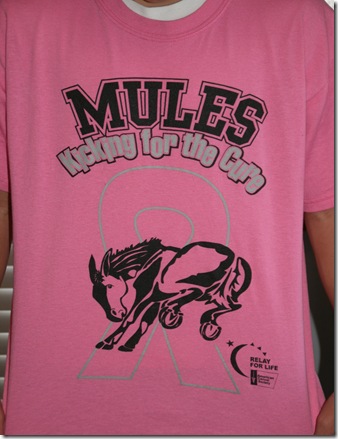 The plan was  to sell the shirts at the schools, United, and Williams Brothers. Then Rhonda posted a notice about the shirts on Facebook , and it was a whole new ball game. The response was overwhelming; shirts were sold quickly at the original locations, but then shirts went out to Houston, Dallas, Roaring Springs, Stephenville, and the second printing of 500 shirts was ordered. And then another 200. Pretty successful when you consider 1200 shirts is about one fifth of the total Muleshoe population. The generosity of the community came through once again. 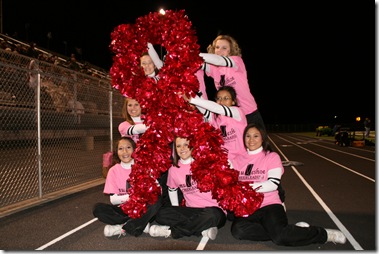 So when October 29th rolled around and the stands began to fill up, the crowd was not completely pink, but darn close. The cheerleaders even wore pink, had special pink pompons, and occasionally on a high jump a flash of pink tights was visible (not visible in this picture, however, as the girls had slipped on the long pants in the cold). The pink shirt plan brought in over $4,000, which will stay in this area and made available to  Bailey County cancer patients and families as they deal with  their fight against this disease. 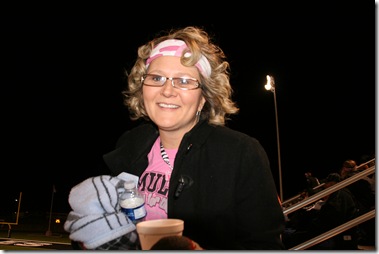 Rhonda Myers Rhonda, a breast cancer survivor herself, told me that the money they raise does help with research and helped to build the new $15 million Hope Lodge in Lubbock, which is like a Ronald McDonald House, but for cancer patients of all ages and their families. Only six Hope Lodges exist in the United States, and this is the only one in Texas. But the majority of the money stays in Bailey County for the benefit of local people. “Any person in Bailey County can get help from the American Cancer Society-rides, gas, lodging, counseling,  financial aid, help finding financial aid, anything the patient needs.  They can get help if they will just ask,” Rhonda told me.  Even though this was a pink endeavor in honor of breast cancer since it was  Breast Cancer Awareness month, Rhonda said she works with Relay for Life rather than some other cancer groups because, as she put it, “[Relay for Life’] is for all cancers, not just breast cancer, and nearly everyone has been affected in some way by cancer, and in a small town it helps everyone.” Rhonda and her committee felt like they could sell the shirts for this very reason. Talk to people and connections to cancer pop up everywhere. So there will be more fund-raisers and awareness events in the future. June 3, 2011, will be the Bailey County Relay for Life, and next October I suspect there will be another pink affair to keep the search for a cure on everyone’s  mind.