Muleshoe Knows How to Stuff a Bus 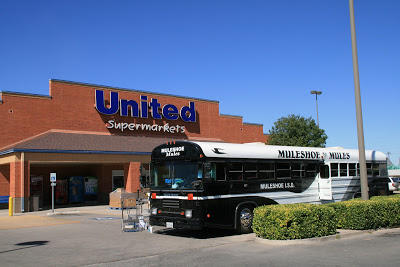 The Muleshoe Food Pantry was running out of food. The South Plains Food Pantry, which helped supply commodities and other items to our food pantry, was also running low and could not meet some of our needs. So Donna Jay, who is in charge of our food pantry, took her concerns to Chad Lovell, manager of the Muleshoe United grocery store. He suggested a food drive. Donna was not looking forward to that because sometimes food drives, while helpful, turn into added work for her. “People use the collection barrels for trash cans. I have to clean the cans, throw away chewed gum and trash, sort the cans, and it turns into a big mess.” 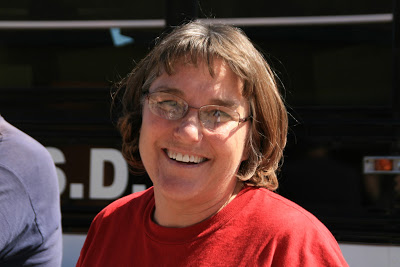 Donna Jay
Chad replied, “You need to think big. You’re thinking cans, Donna. You need to think cases,” and with that the plan emerged that United would supply cases of canned goods and pallets of flour and sugar at a reduced rate for people to buy and donate to the cause.
The plan was to locate the food drive at the United store and make it an event. And if Donna needed to think big, the next question was, what to collect the food in. Cases don’t fit into barrels or even big boxes. They decided on a school bus, especially since the kids at the schools would be competing to see who could collect the most food. When they asked Carl Krug at the bus barn which bus he would be willing for them to use, there was no question in his mind. Without hesitation, he insisted  they use the activity bus, the biggest bus in the whole fleet.
And that’s just what they did. April Smith, Valerie McCamish, Tracy Been, and Kimberly Woolbright coordinated  at the schools with the Community and Schools program, churches pitched in to collect flour and sugar, Curtis and Kari Preston and Cathy Carr worked with 4-H, and other organizations were encouraged to enter the competiton and see who could come up with the most cases, loose cans, bags of flour and sugar. 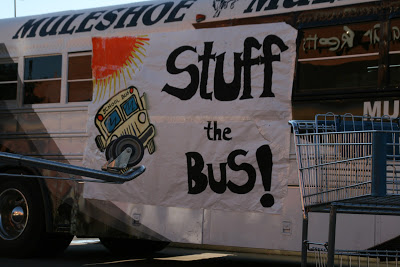 On the appointed day, October 9th, the bus was parked right in front of the United entrance, shopping carts were turned upside down to block traffic, food was stacked on pallets, signs were posted, and Stuff the Bus! began at 7:45 that morning. 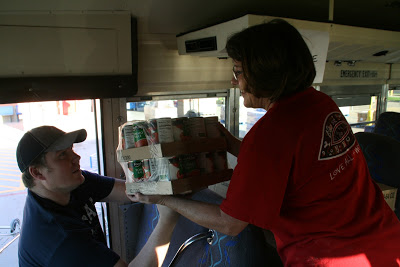 I went down to take pictures mid-morning and found the bus already pretty full of groceries and Donna Jay, son Cody, Diane Thornton, and others were busy loading food into the bus. I went back that afternoon and found Jim and Lynn Daniel, April, Cody, Pam Atwood, Chad Lovell, and others hard at work. It was beginning to be hard to see out the bus windows. Flour and sugar completely filled the space in front of the rear doors, the floor space in front of each seat was full as were most of the seats themselves. It was quite a sight. 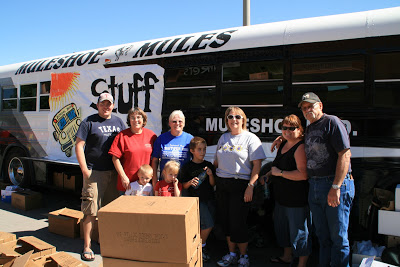 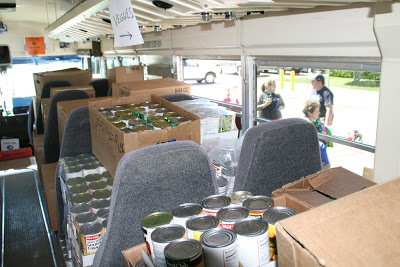 When they stopped loading at 6 p.m. and weighed the bus, it was discovered they had collected 15,375 pounds of staples for the food bank. Several varsity football players and coaches arrived to help unload at the food pantry and by 6:45, they all took a satisfied, tired, contented breath, and knew the day had been a success.
Sunday Donna went back to the store armed with monetary donations that had also been made and proceeded to purchase more food, 12,000 pounds more, and started picking up sugar and flour from the churches, and before it was all over, a total of 30,000 pounds of food made its way into the food pantry.
Donna has been in charge of the Muleshoe Food Pantry for about the last two years, falling into the job when she asked Kay Mardis how she could help. Kay had been in charge for many years and felt like the time had come to pass it on to someone else, so when Donna offered, Kay knew her prayers had been answered. And Donna has been more than happy to carry on the tradition. This food bank was started in May of 1998 by Kay Graves and Linda Low who saw a need to be filled, and the generous people of Muleshoe have kept it going. Donna told me she was more than happy to do the labor part, working closely with  Chris Mardis, who does most of the paperwork, and April Smith who helps coordinate things. Things like a food pantry can’t be successful without the help of many, however, and Donna credits Chad and his assistant store managed Ray Ybarra with the idea in the first place and all their hard work afterward to make stuffing the bus a reality.
“I’m not real good at coming up with ideas, but I’ll go with your ideas,” Donna laughed, and her willingness to follow through paid off. Kay Mardis, however, says Donna seems to come up with food from unlikely places on her own,  like the time Donna and her mother bought and hauled food to the food pantry from a New Mexico store that was going out of business.
The food drive may be over-for now-but the work of the food pantry is continuous. Eight different groups handle the weekly chores. Wednesdays the food is divided and sacked; Saturdays the sacks are distributed among the 200 local families served by the pantry. Donna goes in twice a week to clean and restock shelves and once a week meets the truck from the South Plains Food Bank to receive what they contribute.
The people of this community are a giving bunch and they pretty much outdid themselves with this undertaking. Trinne Jackson from the South Plains Food Bank was so impressed she has invited Donna to speak at their summer conference on how to organize such a successful endeavor. I have a feeling Donna will want to take a carload of those people who helped make it such a success with her so they can be recognized and to share their ideas.
I asked Donna how long all this food would last. Along with the average local donations and the South Plains Food Bank, she estimated it might last about a year. So don’t be surprised if about this same time next October, a big black and white bus is blocking your path to the grocery store again. Who knows? Next year it may be a railroad car container, or a small yacht, or a cattle trailer, or a cotton module trailer, or…

Note: Since posting this article, I have since learned that Donna Jay has been named a Hunger Hero by the South Plains Food Bank and will be honored at the Mayor’s Hunger Heroes luncheon in Lubbock this Friday, October 22.