Joe Bob Stevenson took us all by surprise when he rode off into the sunset October 7. He had gone through by-pass surgery and we all thought everything was going to be all right.  But it wasn’t. I could tell you all the information from his obituary again, but then, if you wanted that, you would just read the obituary. What I would rather tell you is Joe Bob stories, two of which I have already told about in earlier blog posts, in the elevator story -(Don’t you get bored just riding an elevator all day?- “High Rise Condo or Grain Elevator?” October 16, 2009) and the one about double names (Mr. Bob, here is that information you asked for.-“What’s Your Given Name?” December 16, 2009. 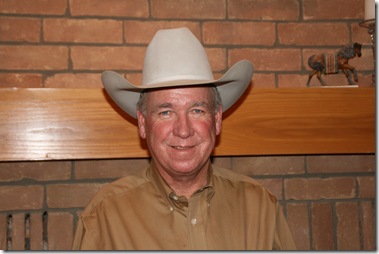 I remember my first impression of Joe Bob when we first moved here in 1980. We would go to the Muleshoe Country Club for an evening out sometimes, and in would come this quiet, starched, neat as a pin cowboy. He would order a drink and then sit down to an on-going conversation, listening more than talking, adding a comment here and there. And then as quietly as he had come in, he would silently slip away and travel to Clovis, as I later found out,  to court Sheila and eventually marry her.

Joe Bob worked as a bookkeeper for King Feed Yard and King Grain for more than 25 years. The office was always a meeting place for farmers and friends, but when the weather would misbehave or the crops were in, there was nothing pressing to do, they would wind up there for a “board meeting.” Joe Bob would preside over the gathering: refreshments would appear, the board members would get warm and comfortable, and the local news would be passed around. Men don’t gossip, of course, they just call it news, and that along with funny stories and the latest jokes would be savored along with the refreshments.

Joe Bob and I shared a love of horses, but we didn’t share a love of cheese. For me, a day without cheese is a day without sunshine. For Job Bob, cheese was just a nuisance. He would order a hamburger and then get peeved when the wait person would always ask if he wanted cheese on that. He would tilt his head and grit his teeth and say, “If I had wanted a cheeseburger, I would have ordered a cheeseburger.” When I called  recently to ask them over to help us try out a new recipe, his response to me was, “What are we having, cheese and what?” and then just chuckled.  And-no surprise to Joe Bob-cheese was in the recipe…

The best cheese story, though, is the one that goes way back to his bachelor days when he and several others were still sowing their wild oats and spent many a Saturday night making their way home in the wee small hours from Clovis after a night of honky-tonking. This particular night they were in need of solid food in their tummies and stopped at a convenience store for something to snack on. The group made the mistake of sending Joe Bob into the store. He rummaged around a bit and finally started making his way to the check-out counter when they realized what this non-cheese eater picked out for them. “Oh, NO- He’s buying Velveeta!” I don’t know about you, but Velveeta would not be my snacking cheese of choice, especially after partying all night. But they made it home to tell the story, so I guess they made it do.

I’m sure there are other Joe Bob stories; anyone who knew him has one. But I will leave you with one more glimpse into his quiet humor. We had a super bowl party last year and one of the gimmicks was to watch an ad, I forget for which company, with 3-D glasses, which I dutifully located. So when the time for the ad came, we all donned the glasses and looked like throwbacks from the 1950s and got absolutely nothing exceptional out of the ad. What we did get a kick out of, however, was looking at Joe Bob sitting very seriously with his 3-D glasses waiting for something spectacular to happen. It was fun. 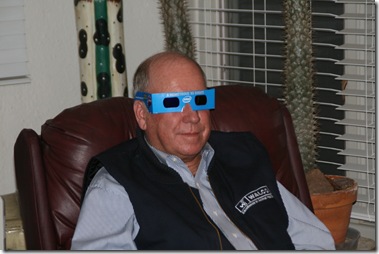 We would have all gone to see the new movie about Secretariat together. Joe Bob and I would have enjoyed it more than our spouses, but we would all have had a good time.