This September when the bustin’ loose mule made its way onto the new turf football field and the floor of the entrance to the high school, cast in stone, as the saying goes, Krystal Angeley Bennett knew it was time to tell the world who came up with that mule. So she set the wheels in motion to do just that. But setting the wheels in motion is not the story; the history of the mule is. 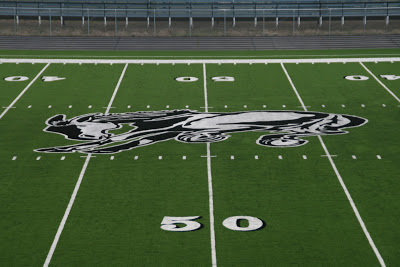 It all started years ago with a casual comment to Mike Richardson when he and Hellen Adrian were both teachers at Watson Junior High. Hellen commented that she wasn’t particularly crazy about the two bland, commonly used mule logos around at the time, to which Mr. Richardson suggested she do something about that, being an artist and art teacher and all. So that was on her mind when she, as their  sponsor,  accompanied the varsity cheerleaders to cheerleading camp at Eastern New Mexico University in the summer of 1987, and they passed a mural depicting a Portales High School ram busting through a brick wall. The girls were taken with the concept, and Krystal asked Mrs. Adrian if she could come up with a mule busting through the bricks instead of the ram. Three days later she presented the girls with a mule breaking through a brick wall, and Mule Mania Bustin’ Loose was born.

The girls gained permission from Irvin St. Clair to paint the new logo on the American Boulevard side of the St. Clair building with the understanding that the next owner would have the right to paint over it if they so desired. Mrs. Adrian then presented Krystal Angeley Bennett, Lisa Noble Gunstream, Lisa Triana, Amber Green, Amy Harrison Lackey, Selina Gonzales Graves, Monica Pacheco Gonzales, Debbie Brown Schulze, and Wendy Green  Patton with a paint-by-the-numbers diagram she had created. Then in the middle of the night, so it would be nice and dark and the diagram would show up better,  they set up a projector, strung out extensions cords and kept backing up to get far enough away to make the mule large enough. They wound up in the middle of the highway! But since the sidewalks roll up pretty early in Muleshoe, that wasn’t a problem. The girls and Hellen traced the pattern and within two weeks the mule busting through the bricks was finished.

That mule greeted visitors and residents for many years before it was painted over, and for the past 23 years that same mule has appeared on t-shirts, programs, ads, signs, flags, mail boxes, been painted on other walls, embedded in the floors of our school buildings, on the walls of our gyms, and has appeared so many other places that it is hard to think of the Muleshoe Mules without visualizing that mule kicking up a ruckus. 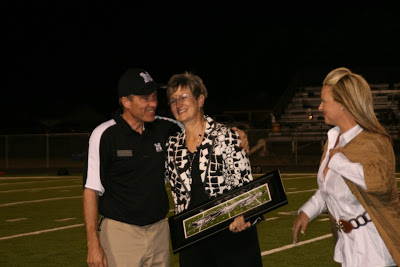 Hellen was surprised during half-time at the homecoming game this past Friday, October 8, when a brief history of the mule was read and Superintendent Gene Sheets presented her with a framed picture of that mule as he now graces the center of the field. 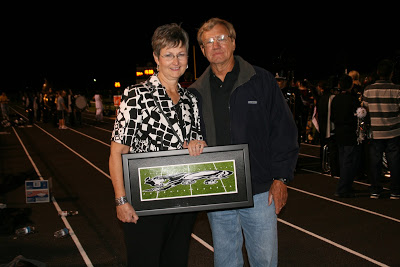 Hellen and her husband Lonnie

Hellen shared the mule unselfishly and willingly and never considered copyrighting the design. She never expected monetary reward or recognition; it has been her gift to the community. And for that we are grateful. Thank you, Ms. A, for sharing your time and talents with us and for spreading Mule Mania far and wide.

P.S.- I forgot about those of you who never saw the original mule as he appeared on the side of the St. Clair building, and we couldn’t find a picture of it, so I need to tell you that it had  MULE MANIA written in big bold letters on the left side of the mule and BUSTIN’ LOOSE on the right side.