This little black kitten showed up in our yard on July 2, 2004, afraid of nothing and determined that this would be her new home. Bill thought we had enough cats, I think we had three then, and did his best to shoo her away. She had no fear of him or his weed-eater and hung around long enough to make it official: she was indeed home. 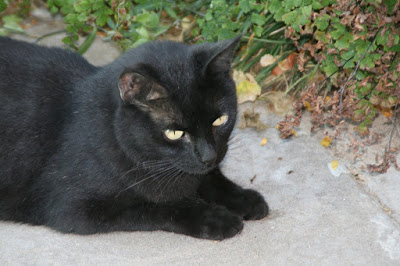 She had been here about a week, and we still had not named her. I had a batch of peaches Bill was peeling and I was freezing. He had loads of help from the little black kitten, which, looking back on it now, was just a precursor to her behavior when someone comes to work on my computer and she insists on helping. Well, being in the way, but you get my drift. Bill pushed her away one more time and said, “I guess we might as well name her Peaches. She seems to like them.” And it stuck. 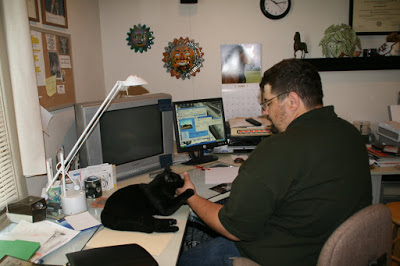 She had not been here too long when she broke a back leg. We have no idea how it happened, other than we found some things on the floor in the garage that had fallen from a high shelf, so maybe she tried to jump up there and fell down along with things from the shelf. I dutifully took her to the vet and they set the break and put a cast on the leg.

Well, we hadn’t been home an hour before she figured out a way to pull that cast off, so back we went for a redo. I think she managed to get it off once more before deciding it wasn’t worth it and left it alone. She healed nicely, but I think it curbed her desire to jump in the highest of places.

She is a funny little cat; for the most part her method of communication is a growl. She asks to be petted, gets in my face, and then when I try to cuddle and pet, she fusses and bites and jumps down. It definitely has to be her idea. Her favorite place, the only place she will actually jump in my lap and curl up, is when I am in the bathroom. Then when I am ready to get up, she gets mad and fusses at me before jumping down. Go figure.

Peaches is six years old now and shows no sign of changing her method of communication, but she has become more needy of attention and makes sure she is wherever we are, just to make sure she doesn’t miss anything. I guess cats are suseptible to FOMO (fear of missing out) just like people. 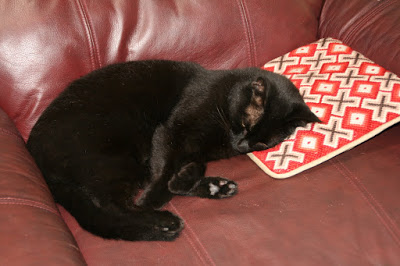 I am glad she decided that we were the family she wanted, because we would have been the ones to miss out-on knowing her.